The Wife and I have become big fans of the Alton Brown-hosted cooking competition show Cutthroat Kitchen, and not just for its gonzo competition stuff but because it also has actually broadened our food horizons a bit, whenever the challenge dish is something we haven't heard of before. Such an example came up a few weeks ago, when Brown tasked his competitor chefs with making a dish called shakshuka.

Being unfamiliar with the dish, I googled it and discovered that it's a dish of Middle Eastern origin, in which a rich tomato sauce is made and then eggs are poached on top of it. I was intrigued by this on a number of levels: I love eggs, I love tomato sauce, and I love Middle Eastern cuisine, and when I started looking at recipes, I realized that this dish is well within my ability to cook. So cook it I did! I used this recipe from Epicurious.com, and...the results were mixed.

We enjoyed the dish more than enough to put it on the "Make it again!" list, but there were some areas of concern. First, the recipe calls for way too much salt, so I'll be correcting this massively when I make the dish again. Second, the recipe's stated cook-time for the eggs was too long to our taste, resulting in hard-cooked eggs. I'm not sure if we want runny eggs, but hard-cooked was a little too much. But still: for a first-time-attempt, the dish turned out well and I'm looking forward to trying it again. 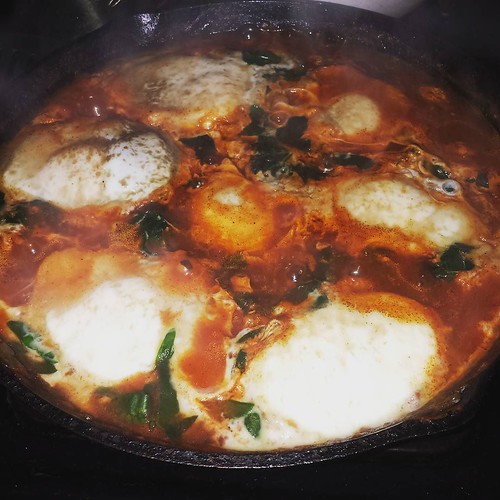 Good stuff, but next time it'll be great stuff!

(Oh, and I omitted the bay leaf, because seriously, f*** bay leaf. Those things are useless.)