Nothin' good comes from a can.... (An experiment involving whipped cream)

Pie-in-the-face weirdness below the break....


OK. So it's been my experience that the most common form of whipped cream in the US, the stuff in the aeresol can, is great for topping your pumpkin pie or for dipping strawberries or for giving to cats as a treat (yes, this is a thing), but lousy for pies in faces. The stuff is very highly aerated so as to come out of the can better, but once it's dispensed it breaks down very quickly. You really have to use the stuff fast, lest the effect be less of getting hit with a pie and more of getting hit with a plate of thick milky-cream stuff. Yuck.

But, I saw a can of whipped cream the other day marked "Extra Creamy!" and that it was made with real cream. So...I tested it, because that's what you do.

I dispensed the contents of the can into a pie crust. It started breaking down almost immediately, which was not an encouraging sign.... 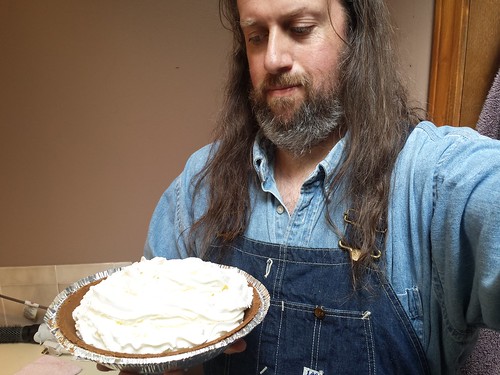 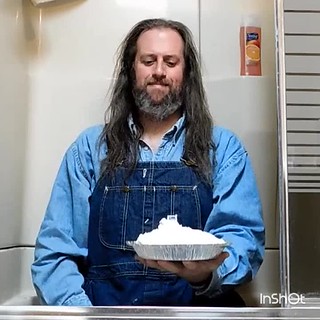 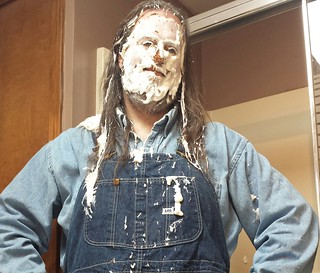 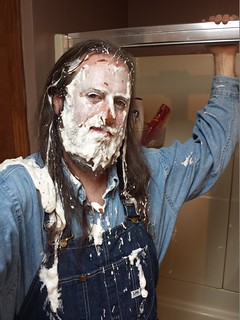 I don't expect this stuff will replace my usual preferred products for this sort of goofery (you can't beat a nice coconut cream pie for splatting purposes), but for a "quick hit", there are worse options out there.

So the whipped cream in the spray can gets a partial reprieve. I will not be embracing shaving cream, though. Because ewwwww!

Tips for success: Use a lot of the stuff, and dispense it as close to the splatting as possible. The spray-can stuff will melt quickly. And have fun, because as always, a pie in the face is a wonderful thing!

scrawled here by Kelly Sedinger at 11:25 AM

Email ThisBlogThis!Share to TwitterShare to FacebookShare to Pinterest
Labels: Overalls, Pie in the Face