When I go to bookstores, I always see people browsing the poetry section, and I see lots of new poetry books adorning the shelves. I even buy some myself, on occasion. I've bought several poetry chapbooks for my Kindle.

Poetry is dead? Well, if it is, there sure seems to be large number of people who never got the memo. 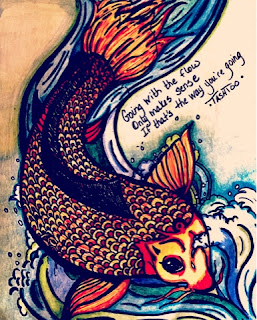 Natasha Head is a poet I first met on Instagram, and then on Tumblr and Twitter as well. She's active on Facebook, and what's more, she's very active in the Canadian poetry community, and she has appeared on podcasts to read her work and she's been printed in Canadian journals and she has published several collections of her own work. She's quite a wonderful poet who has become an essential voice in my own writing world.

Poetry is dead? I'd tell you not to tell her, but really? I don't think she gives a shit. She's too busy writing poems.

The bench was hard and splintered
But to us it was good as a throne
The smoke was heavy and skunky
If it wasn't, we would have stayed home

The soundtrack was a walkman
With blaster speakers doctored by you
Suicidal Tendencies, Social Distortion
Back then, the balls and chains were few.

All we knew for certain
Was that we couldn't be caught
Losers like us have a way of evasion
We slip away with barely a thought.