:: Check out this period photo: 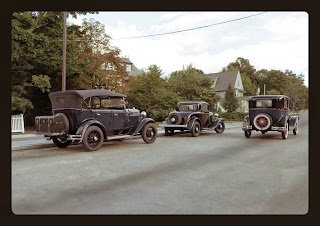 Guess what! It's not a period photo -- it's staged, using models. Check it out!

:: I really wish Breaking Bad was my cup of tea, judging by the assurances I've seen of how well-written it is. Guy Gavriel Kay weighs in with this fascinating essay:

Breaking Bad has been, correctly, I think, widely cited as a writers’ show. It is held up by many as a television series that can serve as an example to novelists of an engaging, deeply layered story arc. But, for me, for this piece, one moment is what caught me.

In that last episode, Walter White has returned home, heading towards a violent closure, and has (somehow) slipped unseen into his wife’s new home. They have a last conversation. As Walter begins his final words of explanation, his wife interrupts to demand, “Don’t tell me again you did it all for us!” which has been his litany. But this time he replies, in essence, “No. I did it for me. I enjoyed it. I was good at it. I felt alive.”

Having just read the New Yorker piece, I had to grin. It was just too perfect. Who was the lord of emperors here? The gifted, award-winning actor playing the drug kingpin Heisenberg, or the writer who wrote the words the actor was caused to speak—and thereby settled that debate about motivation, forever.

If Breaking Bad, for all its skillful acting and often superb (and witty) visual perspectives, is truly a show about the writing, that exchange seals it. Gilligan [creator and head writer Vince Gilligan] defined his emperor, explicitly and out of Heisenberg’s own mouth.

:: I won't embed the video here because...well, it's really gross. But if you like a good gross-out once in a while, especially those created by Mother Nature, this is a really good gross-out. Here's the scenario: a dead whale washes up on shore. The carcass has to be disposed of. But...it's bloating on the inside, and that pressure has to be relieved before they can move the dead thing...only sometimes the relief of that pressure is more violent than you might want, especially if you're the guy whose job it is to jab the dead beast in the belly with a pointy stick. Ewwwwwww!

scrawled here by Kelly Sedinger at 11:20 AM

Forgive my trite expression but his majesty has been busted. The all knowing Guy has blessed this series and now you declare it is byzantium material, but when someone as low as one of your earls claims it worthy of your view I am dismissed and dismissed with flagrant prejudice I must admit I am not surprised for I know my place.

I'm still extremely unlikely to watch it, as the story and subject matter simply aren't my thing. I never questioned that it was a well-written and well-made series! Just because I don't want to partake of something doesn't mean that I think it sucks.