A bit of politics here, after the break. Keep scrolling if you don't want one of my rare bursts of liberalism in this space!

First, this by Henry Blodgett, speaking against the notion of rich people as "job creators":

As America struggles with high unemployment and record inequality, everyone is offering competing solutions to the problem.

In this war of words (and classes), one thing has been repeated so often that many people now regard it as fact.

Specifically, by starting and directing America's companies, entrepreneurs and rich investors create the jobs that sustain everyone else.

This argument ignores the fact that taxes on entrepreneurs and investors are already historically low, even after this year's modest increases. And it ignores the assertions of many investors and entrepreneurs (like me) that they would work just as hard to build companies even if taxes were higher.

But, more importantly, this argument perpetuates a myth that some well-off Americans use to justify today's record inequality — the idea that rich people create the jobs.

The prevailing story that justifies tax cuts for America's entrepreneurs and investors is that the huge pots of gold they take home are supposed to "trickle down" to the middle class and thus benefit everyone.

Unfortunately, that's not the way it actually works.

First, America's companies are currently being managed to share the least possible amount of their income with the employees who help create it. Corporate profit margins are at all-time highs, while wages are at an all-time low.

Second, as Hanauer observes, America's richest entrepreneurs, investors, and companies now have so much money that they can't possibly spend it all. So instead of getting pumped back into the economy, thus creating revenue and wages, this cash just remains in investment accounts.

Second, this by David Simon, creator of the highly-regarded teevee series The Wire (which I have not seen). This article is a nearly pitch-perfect summation of what I believe.

Labour doesn't get to win all its arguments, capital doesn't get to. But it's in the tension, it's in the actual fight between the two, that capitalism actually becomes functional, that it becomes something that every stratum in society has a stake in, that they all share.

Ultimately we abandoned that and believed in the idea of trickle-down and the idea of the market economy and the market knows best, to the point where now libertarianism in my country is actually being taken seriously as an intelligent mode of political thought. It's astonishing to me. But it is. People are saying I don't need anything but my own ability to earn a profit. I'm not connected to society. I don't care how the road got built, I don't care where the firefighter comes from, I don't care who educates the kids other than my kids. I am me. It's the triumph of the self. I am me, hear me roar.

That we've gotten to this point is astonishing to me because basically in winning its victory, in seeing that Wall come down and seeing the former Stalinist state's journey towards our way of thinking in terms of markets or being vulnerable, you would have thought that we would have learned what works. Instead we've descended into what can only be described as greed. This is just greed. This is an inability to see that we're all connected, that the idea of two Americas is implausible, or two Australias, or two Spains or two Frances.

We have become something other than what we claim for the American dream and all because of our inability to basically share, to even contemplate a socialist impulse.

Socialism is a dirty word in my country. I have to give that disclaimer at the beginning of every speech, "Oh by the way I'm not a Marxist you know". I lived through the 20th century. I don't believe that a state-run economy can be as viable as market capitalism in producing mass wealth. I don't.

I'm utterly committed to the idea that capitalism has to be the way we generate mass wealth in the coming century. That argument's over. But the idea that it's not going to be married to a social compact, that how you distribute the benefits of capitalism isn't going to include everyone in the society to a reasonable extent, that's astonishing to me.

And so capitalism is about to seize defeat from the jaws of victory all by its own hand. That's the astonishing end of this story, unless we reverse course. Unless we take into consideration, if not the remedies of Marx then the diagnosis, because he saw what would happen if capital triumphed unequivocally, if it got everything it wanted.

And one of the things that capital would want unequivocally and for certain is the diminishment of labour. They would want labour to be diminished because labour's a cost. And if labour is diminished, let's translate that: in human terms, it means human beings are worth less.

Mistaking capitalism for a blueprint as to how to build a society strikes me as a really dangerous idea in a bad way. Capitalism is a remarkable engine again for producing wealth. It's a great tool to have in your toolbox if you're trying to build a society and have that society advance. You wouldn't want to go forward at this point without it. But it's not a blueprint for how to build the just society. There are other metrics besides that quarterly profit report.

The idea that the market will solve such things as environmental concerns, as our racial divides, as our class distinctions, our problems with educating and incorporating one generation of workers into the economy after the other when that economy is changing; the idea that the market is going to heed all of the human concerns and still maximise profit is juvenile. It's a juvenile notion and it's still being argued in my country passionately and we're going down the tubes. And it terrifies me because I'm astonished at how comfortable we are in absolving ourselves of what is basically a moral choice. Are we all in this together or are we all not?


Read that whole thing, too.

Finally, local blogger and friend Alan Bedenko provided a bit of graphical information yesterday demonstrating pretty conclusively that America's thirty-plus year experiment with supply-side economics has simply not produced the kind of overall economic prosperity that's been promised. What has happened instead is a relentless upflow of money that is causing less social mobility than ever before. 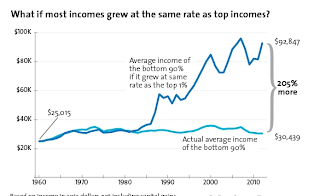 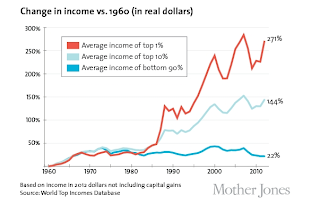 The libertarian response would be one of two answers: first, we just haven't made the markets free enough yet and only by remaining the final shackles will we create a tide that really lifts all boats, or second, the freedom of the markets is so inherently good and important that they actually supersede the real economic problems they create. Quite the bit of doublethink there: "Our prescription will solve a problem that in our hearts we don't really believe is a problem at all."

The worst thing is that there is now an entire generation of Americans who have grown up and internalized this bullshit and who think that this is the natural order of things, the way it's supposed to run. Huge amounts of economic inequality and instability? Features, not bugs.

Will it ever change? Of course it will. The pendulum always swings. I just hope I get to see it start to swing back in my lifetime.
scrawled here by Kelly Sedinger at 10:30 AM

Kelley, You have to see chart I just posted on FB from BloombergBusinessweek.
I'm trying this blog thing, but keep hitting walls.
Ken Workman
Fort Lauderdale

I was working on my blog and I had linked to this post. Still true, unfortunately.