Notes with a fountain pen 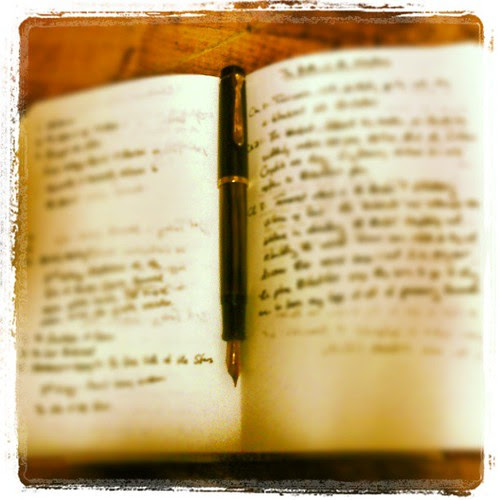 Notes with a fountain pen. The story is taking shape! #AmWriting, originally uploaded by Jaquandor.

On a break today I decided to jot down some notes on the plot of Princesses In SPACE!!! II: Just When You Thought It Was Safe For the Princesses To Go Back in the Water (not the actual title), as well as some random plot ideas and notions that may or may not bear fruit later on.

I've written in the past that I don't, as a rule, do much by way of outlining. I find that even when I try to outline as specifically as I can, invariably I reach a point where my characters start doing other stuff, and I either write a lot of unconvincing stuff as I try to force the story back into the shape of the outline, or I end up tossing the outline altogether -- in which case, the original work was pretty much a waste of time.

So I don't outline much. About the only outlining I will do is very low-level, and high-focus, work in which I plot out no more than the next chapter or two. And even then I find that I can wander off the planned course, so I still tend to lay off the hyper-specifics. And if I outline the entire story, it's extremely high level -- no more than a blurb or two the describe the entire story. I simply cannot work from a detailed outline, and nowadays, I don't even try to do so.

That particular notebook, by the way? I've had that notebook for about fifteen years. Maybe a little longer. When I flip through it, I find story notes from The Promised King and, going back to even several years before this blog even started, the Star Wars fanfic that I was working on around the time I got married. Seeing those notes again always feels like an artifact from someone else's distant past...not even mine....

I love keeping notes in a journal using a fountain pen, and I can't conform to an outline either.