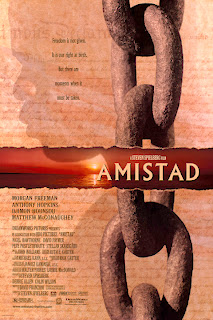 I've only seen this movie once, and I liked it, but not really enough to watch it again. At the time I remember finding it well-made, well-acted, and all, but a bit on the slow-moving side and generally not too involving. But at the end of the film, when the court case in the story (regarding the status of a group of Africans, on their way to being sold into slavery, who rise up while still on the slave ship from Africa) reaches the Supreme Court, we get to hear a long speech by former President John Quincy Adams (played by Sir Anthony Hopkins), that I've watched, in itself, many times on YouTube. It's a terrific speech, and like all great speeches, the most emotionally resonant part comes at the end.

The other night I was talking with my friend, Cinque [the slave, played by Djimon Honsou]. He was over at my place, and we were out in the greenhouse together. And he was explaining to me how when a member of the Mende -- that's his people -- how when a member of the Mende encounters a situation where there appears no hope at all, he invokes his ancestors. It's a tradition. See, the Mende believe that if one can summon the spirits of one's ancestors, then they have never left, and the wisdom and strength they fathered and inspired will come to his aid.

"Who we are is who we were." That's very true, isn't it? Like it or not, for good or ill, we are in many ways the sum of the experiences of our forebears. And so will our children be, of us.

Amistad is just ET with Africans as aliens. "ET phone home" = "Give us free."

I think that your description of the film is about perfect. But I haven't seen any of it since I watched it at the cinema.