No, not the snow. Ice cream. 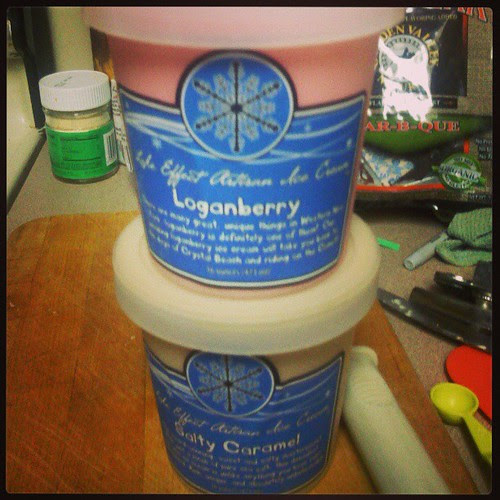 For the past couple of years I've been hearing about a local outfit that makes artisanal ice cream, called Lake Effect Ice Cream, after our region's most notable climate feature. Problem is, by 'local', I mean within thirty miles of Buffalo, and in the opposite direction from Casa Jaquandor. Lake Effect Ice Cream is located in Lockport, NY, which is quite a road trip from lovely Orchard Park. In other words, we weren't road-tripping just for ice cream. (What else is there in Lockport, anyway? I'm genuinely curious. If there's a good reason to road-trip, I'm game.)

But now, the Lake Effect folks have grown big enough to be able to start putting their wares in local stores, one of which actually is about fifteen minutes away from Casa Jaquandor. So off we went today to pick some up.

I had the Salty Caramel; The Wife had the Loganberry. I suppose Salty Caramel is self-explanatory, but for anyone not from Western New York, "Loganberry" probably needs some explanation. Loganberries are a kind of hybrid berry, between blackberries and red raspberries. They are also a very popular flavor of fruit beverage in these parts, not unlike fruit punch. There are few things more satisfying on a hot summer evening than a glass of loganberry drink accompanying a hot dog and fries. Some places have loganberry milkshakes, and now, Lake Effect makes a Loganberry ice cream.

The Salty Caramel is very, very good. The Loganberry is amazing.

We'll be trying more flavors, obviously. I saw one called "The Aud", which claims to use as a base "Labatt Blue ice cream". Ice cream, flavored like the area's favorite lager beer? Really? Can that be possible?

I will find out, and report!

You have a "lake effect" there? We do too! Snowstorms entering the Salt Lake Valley from the west pass over the Great Salt Lake and pick up an extra dose of moisture, so pockets of the valley get unusually high snowfall from otherwise small storms. Is your effect similar?