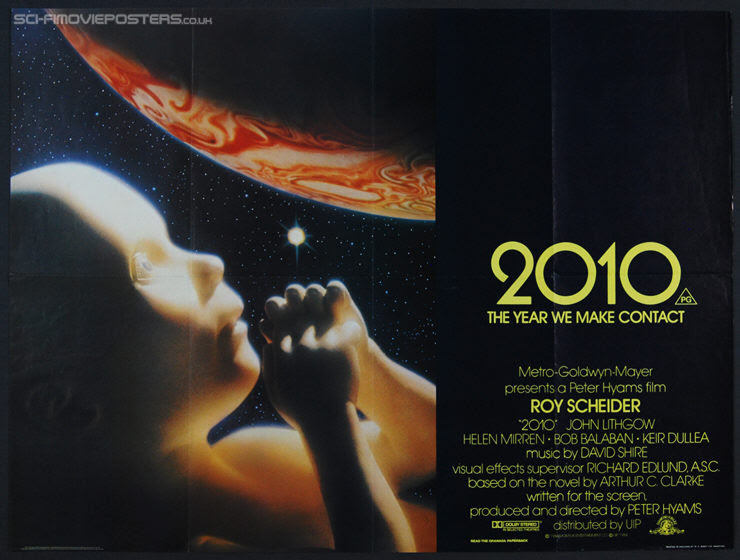 2010 is a fairly odd film, all things considered. It harks back to when Hollywood's mania for sequels was just starting to get underway, and when the idea of reboots was still way off. And the idea of making sequels to films that were nearly twenty years old? And to films that are considered classics? Yup, it's strange that this project ever got off the ground, even with a pretty decent Arthur C. Clarke novel to go by. But off the ground 2010 got, providing some answers for the extremely enigmatic 2001: A Space Odyssey.

Anyway, 2010 holds up well in some ways, not so well in others. As seems typically the case with movies predicting near futures, they're mostly wrong, and what they're really wrong about stands out like a sore thumb now. In the movie, the Soviet Union still exists, and during the film's events, the USA and the Soviets come to the brink of nuclear war. This adds nice tension to the nature of the film's space mission (a joint American-Soviet flight), but it's hard to take it seriously now. But really, how unthinkable was it in 1985 that the Cold War didn't even have an entire decade left to it?

And then there's a little scene where Heywood Floyd (Roy Scheider) and Walter Curnow (John Lithgow) are talking about how they miss Earth, and they get onto a brief bit about the merits of the hot dogs at various ballparks. Curnow opines that the Astrodome makes good hot dogs. Little did they know that the Astrodome's days as a functioning ballpark wouldn't reach 2010, either! But that's all minor stuff. The film's character interactions are nicely done, the cast is terrific (Helen Mirren pushes her Russian accent just to the brink of being too thick to take seriously, but it works), and the visual effects are still outstanding, given the time period. 2010 is an odd film, indeed: it probably shouldn't even exist, but it does, and on its own, it's really not a bad little SF thriller.

Oh, yeah -- this is "Film Quote Friday", so I have to quote the movie. Fair enough. I've done long quotes from movies before, so this time I'll use a very short one. The film indicates that these were the last words received on Earth via transmission from astronaut David Bowman before his disappearance from the Discovery. This line is never heard in the original film of 2001, however -- but it is in Arthur C. Clarke's original novel of 2001: A Space Odyssey. See what I mean? Strange. The quote? Well, the 2001 novel has David Bowman leave the Discovery in a pod and approach the enormous monolith that is hanging in Jovian orbit. This monolith opens up, and Bowman sends home his last report before going inside:

My God! It's full of stars!

My favorite quote from the movie in is: "Will I dream?" It's asked twice.

Best scenes of the movie.