They will be, oh, I don't know, TREKKING at some point, yes?

The new Star Trek movie has a title: Star Trek Into Darkness.

The new Star Trek movie also has a teasing synopsis:

After the crew of the Enterprise find an unstoppable force of terror from within their own organization, Captain Kirk leads a manhunt to a war-zone world to capture a one man weapon of mass destruction.

And, the new Star Trek movie has a poster: 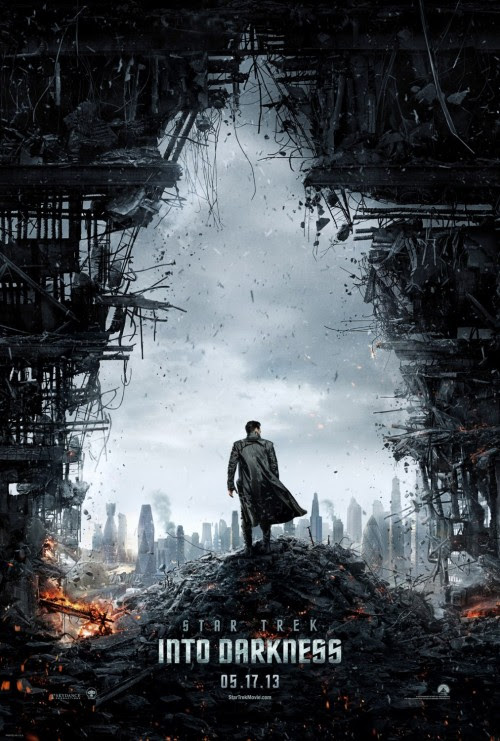 OK. Now, I haven't seen the movie yet, obviously. And I liked the last one, despite its nonsensical plot and complete mishandling of any characters not named Kirk, because it was a very slickly made entertainment with great-looking visuals, fun dialogue, and a frankly wonderful cast. But you know what this rebooted incarnation of Star Trek doesn't seem to have?

Again, I haven't seen the movie, so it's entirely possible that it will be a very good film. But here's the thing: Star Trek was a lot of things over the years, even as it creatively petered out in the Enterprise and Star Trek Nemesis days. It was sometimes good old fashioned space opera. It was military science fiction. It was sociological SF. It was comedy. It gave us some of the best time travel stories ever. It produced an outstanding submarine thriller in The Wrath of Khan, and it did political allegory at times very well (Star Trek VI: The Undiscovered Country), and at times it did political allegory not very well at all (The Omega Glory). Star Trek told some of the best love stories I've ever seen, whether the love was romantic love ("The City on the Edge of Forever"), the love between friends ("The Empath", Star Trek III: The Search for Spock), or the love between fathers and sons ("The Visitor").

But what Star Trek never was, even in its most flamboyant journeys into explodey-spaceshippy-goodness ("Yesterday's Enterprise"), was a tent-pole action franchise. And between that title, that synopsis, and that poster, that sure as hell seems like what the current creative team is shaping up Star Trek to be. So I guess we'll see no more exploring strange new worlds and new civilizations, then? Will this crew at no point be boldly going much of anyplace at all, certainly not where no one has gone before? I mean, look at that poster. What are we looking at? The optimistic future? A future of science, and of exploration? Or are we looking on twisted, mangled wreckage with some bad-ass villain standing in the middle of it?

I know, I know. It's a reboot, so they're telling 'new stories'. But you can only take the concept of a reboot so far before it becomes unrecognizable. You can make Sherlock Holmes a modern-day detective, but you can't make him a tee-totaling policeman with a wife and kids. You can't call your movie a remake of Rashomon and only tell the story from one viewpoint. If your Romeo and your Juliet live at the end and get married, then they're not Romeo and Juliet.

And if the Enterprise crew is an action star split into seven people...then it might be a fun movie to watch, like the last one was. But it won't be Star Trek.

I am lucky to follow some of the most thoughful pop culture opinionist around and you are no exception. I have this fantasy in my head where this one will be the reboot's Wrath of Khan (and did ANYONE predict that Wrath would be as great as it turned out to be especially after the snorefest that was the first movie?) I like to think that Abrams dealt with expectations by creating something that would hook new watchers while not alienating old fans and for the most part he did that. Damn there are alot of movies next year that will either overjoy us all or break our damn hearts but that is the way things always are for the devoted.

Damn, I just realized who the villain is supposed to be from the synopsis - Gary Mitchell.

Whether he's supposed to be Kahn, Gary Mitchell or the great great great (X100) grandson of Bane, shoehorning STAR TREK into THE DARK KNIGHT RISES just seems kind or wrong-headed.

Sort of like making a movie loosely based on Asimov's robot stories, even going so far as to calling it, I, ROBOT and then making Susan Calvin the straight man to a wise-cracking detective hero.

Is it any wonder I don't trust Hollywood.