Some recent food-related stuff that I keep forgetting to post....

:: New York State is one of the country's biggest producers of maple syrup, and every year, in order to bring attention to the state's maple producers, there's a thing called Maple Weekend. (Which is now two weekends, but we'll let that slide.) In the maple-producing hills and hollows of Western and Central New York are lots of tiny restaurants that offer all-you-can-eat pancake breakfasts. Many of these are only open during maple production season, which lasts about six weeks. The one we like to go to is called Moore's Sugar Shack, which is about an hour's drive from Casa Jaquandor.

Up and down roads we went, into the hill country of Western New York that I love so much: 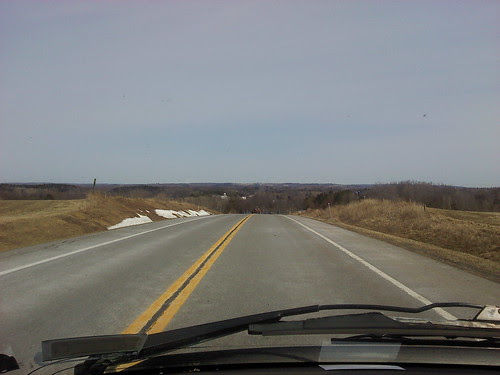 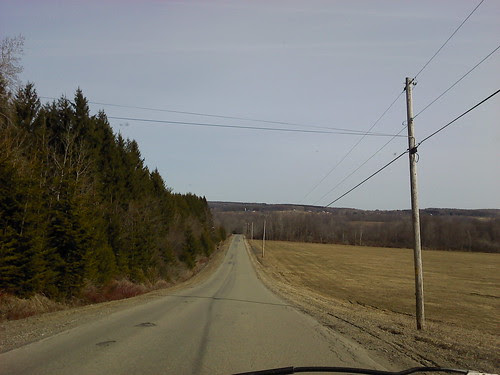 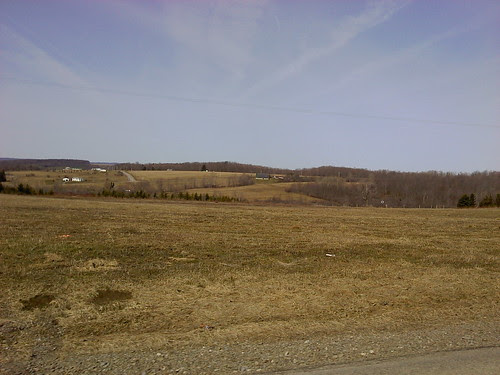 Finally we reached our destination, a few miles outside of a little town called Arcade: Moore's Sugar Shack! 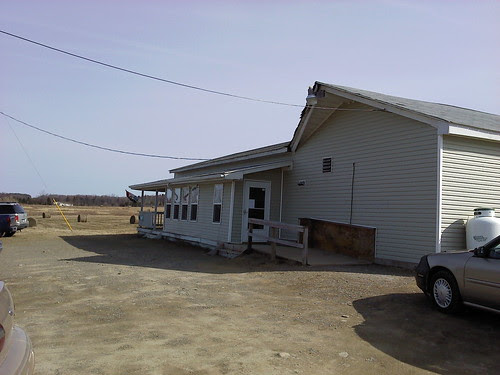 This place is, shall I say, not big. At all. It's about the size of a typical four-bedroom house. In previous years I've been fairly militant about getting up early enough on Saturday morning so as to get to Moore's at a time before the line has formed out the door, but this year we slept in (we'll not discuss the fact that my life has reached a point where 7:00 am is "sleeping in"), and thus we had to wait half an hour for our table when we got there. Part of the delay was the fact that one group ahead of us was a party of seven, so it took them a while just to get enough tables available to push together to seat that family; and besides, table-turns don't come terribly quickly in restaurants where "All You Can Eat" is the policy.

Anyway, the half-hour wait wouldn't have been awful, except for the fact that the party of seven was a couple of adults and five little girls. The mother decided to pass the time with the eldest girl by doing one of those hand-clapping rhyme games with her. You remember those, right? When you and another person clap your hands together as you recite some kind of rhyme? This wasn't annoying at all, until each of the remaining four younger kids insisted on doing it as well. By the third time through that game, I wanted to leap through a plate glass window, and there were two more iterations to go.

But I digress! It really wasn't that bad, and we finally got a table, some much-needed coffee, and we got to look around the incredibly cramped dining room: 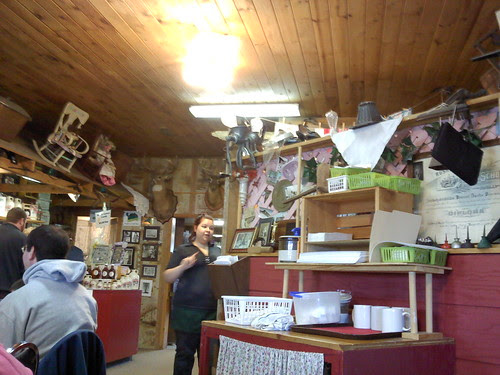 Seriously, these pancake houses are tiny. We were seated almost in the exact middle of the dining room, so there's about as much space behind us as in front of us, and every table was full. I always enjoy the decor, though: old farm tools and antiques from Western New York yesteryear. Finally the main event arrived: pancakes! 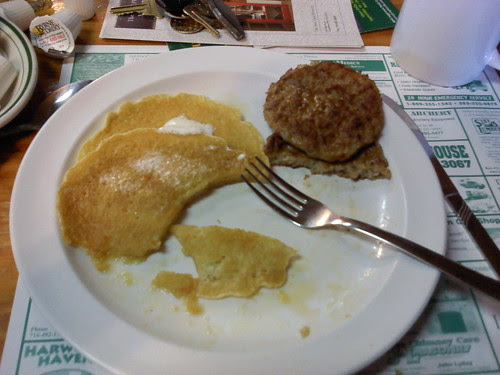 The syrup on the table was produced by Moore's, in their operation right there on those very grounds. There's something special about eating something on the same spot where it was produced, isn't there? Our bottle was full when we sat down. When we left, three helpings of pancakes each later, there was about a third left. Yummmmm! (Funny thing about real maple syrup: since we made that switch several years ago, we're almost nauseated by the notion of eating Log Cabin or Mrs. Butterworth's. If I'm at a restaurant where that's what they serve, so be it, but I'll never buy that stuff for home use again.)

As you might expect, we were highly full after that meal. We didn't eat lunch that day.

:: Years ago I bought a cookbook called The Complete Middle Eastern Cookbook, but over the years I've only cooked once or twice out of it. Why? I have no idea. So I've been digging through it recently, and I found an intriguing recipe called a "Baked Lamb Casserole". Well, I changed things up a bit in the preparation: 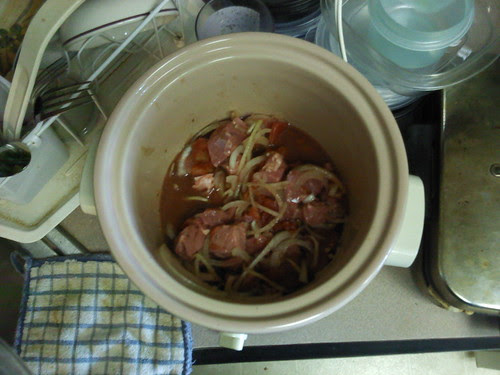 That's beef, not lamb. And the recipe calls for baking the dish in a casserole preferably of unglazed terracotta; not only did I not use unglazed terracotta, but I didn't even bake the dish! I used my crockpot. Oh well. At least I followed the other ingredients as specified (cumin, diced tomatoes, onion sliced very thin). Except for my substitution of some wine for half the water specified in the recipe. I don't know that Middle Eastern cooks do a lot of cooking with wine, but I am almost utterly incapable of using plain water as the simmering fluid in any kind of stew. I'm just not wired that way! This was kind of unusual for me; whenever I try a new recipe, I almost always make it exactly the way the recipe says to do so the first time, before I start monkeying with it a second time. This time, I was monkeying with the recipe right from the outset.

But anyway, the stew turned out wonderfully! I served it on a bed of couscous with some crusty bread on the side (although for Middle Eastern authenticity I really should have used flatbread of some sort) and a dish of extra-virgin olive oil for dipping. The dish was wonderful, although it didn't yield much at all, because I halved the recipe, as I tend to do with new recipes that indicate that as produced they will serve six to eight people.

Anyway, the result was terrific: 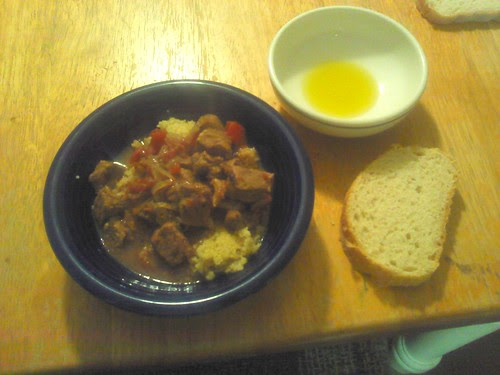 I look forward to doing this recipe again, as well as a bunch of others in that cookbook.

:: Oh teevee gods, forgive me, but I've become hooked on Survivor. I don't know why, but I have. Anyway, in a recent episode, the "reward" challenge (where the winning tribe gets some kind of reward, usually food) was...hot dogs. Well, sometimes the power of suggestion is all I need, so all the next day I was in a giant mood for hot dogs. Thus it was that this came to pass: 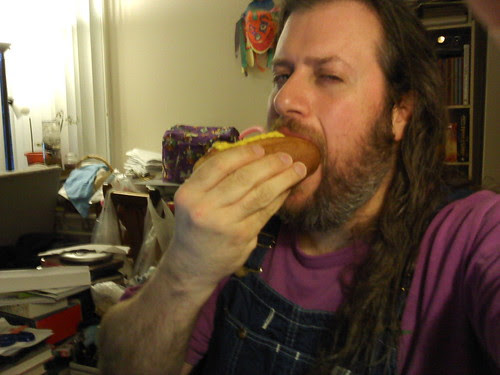 By the way, my preferred condiment for a hot dog is mustard and diced onions. Once in a great while, maybe some pickle relish. Ketchup? Not on a hot dog. Ever. Ixnay on the etchupkay!

More food-related posts as I continue to eat my way through life!
scrawled here by Kelly Sedinger at 11:14 AM

That recipe looks so good! I'm salivating just reading about it.

Ever been to a Quebecois cabin au sucre? They boil maple syrup down, then spread it on snow, and you roll it up with popsicle sticks. So good.

I've gotten to the point that I just don't order pancakes in a restaurant, because I can't stomach the horrible syrup they serve. Maple syrup is one of the best things ever.

My hot dog condiment is sauerkraut. Hamburgers get mustard and sliced tomato.

But to get back to the important part of your post: mmm, maple syrup.