"Leave the gun. Grab the canoli." 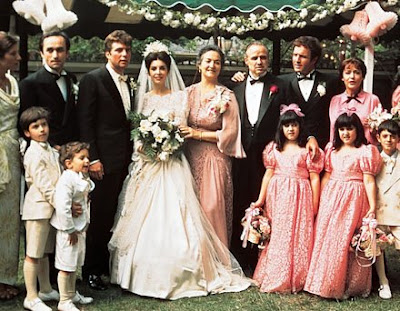 I figured, a while ago, that it was high time I eliminated a particularly large gap in my movie watching career. I've long indicated that stories about the Mob and organized crime in general aren't my cup of tea, to the point where I refuse to see Goodfellas as the rightful Best Picture of 1990. Sorry, Scorsese fans, but I will always love Dances With Wolves more. But, while I have little interest in watching stuff like The Sopranos, I decided that I should at least venture to see the most celebrated film ever made in this genre. So it was that I watched The Godfather, at long last.

Now, I've seen bits and pieces of The Godfather over the years, many and many of the bits and pieces. It turned out that when all those bits and pieces were added up, I had, in fact, seen most of the movie's important parts; the overall plot came as no surprise to me at all, except in a few spots where I finally got to put together the story mechanics behind some very famous scenes. I wasn't going into the movie with any kind of chip on my shoulder, mind you; I expected The Godfather to be a very good movie. But wow, what a movie. That's about all I have to say about it, really, in terms of overall appraisal. The Godfather is just an awfully good film. So, some random observations:

:: You know you're watching a special movie when you're unaware, or only occasionally aware, of the passage of time. The opening scene, at the wedding of Don Corleone's daughter, seems over pretty quickly, and yet it's about half an hour long. And yet, look how much of the movie is set up in that scene! It's really pretty amazing. Virtually everything is foreshadowed in that half an hour, and it's foreshadowed so artfully that we don't even realize we're being foreshadowed, most of the time. (And when we do realize it, the eventual payoff – such as the "service" that Bonaserra is eventually called upon to perform – is surprising in itself.)

:: Passage of time in the movie itself, within the story, is hard to get a handle on, and it seems as though the events of the Corleone family and their enemies don't occupy any real relationship to the world around them. It is unclear as to how many years go by in the course of the film; Michael Corleone is back from Sicily for a minute or two of film time and it turns out that a year has gone by. Don Corleone himself goes from elder with lots of vitality to ancient patriarch before our eyes.

:: The passage of time thing brings up a larger point, that the world the film depicts – the world of the Sicilian mob in New York – is a totally insular one, isn't it? There's almost no depiction of any connection to the doings of the outside world, except as they relate to the criminal activities of the Corleones. It's also interesting to see that law enforcement plays almost no role in this movie. There's a dirty cop who isn't around very long, and during the wedding that opens the film some FBI agents are taking down the license plate numbers of those in attendance, but that's about it, isn't it?

:: I wish I hadn't known about the decapitation of the race horse before it happened; I'll bet that was a shocking moment to audiences back when this film came out. Instead, I'm kind of saying to myself: "Hey! That's the horse whose head gets chopped off to make a point to this arrogant prick!"

:: It's interesting to me that "Luca Brasi" has become a pretty well-known character name in pop culture these days, for a character in a three-hour movie who has very little actual screen time. Luca Brasi isn't around very much at all, is he?

:: The only part of the movie that lagged, in terms of pacing, was the part set in Sicily. It just wasn't terribly interesting, although it did establish the root of Michael Corleone's later ruthlessness.

:: My favorite line of dialogue in the movie is "Leave the gun. Grab the canoli."

I will watch the sequels at some point.
scrawled here by Kelly Sedinger at 10:57 AM

I've never watched any of the Godfather movies either.

I love the first one so much, it took me a long time to be able to accept the 2nd one -- but I now realize it has its moments, two of which are excellent and remind me that Al Pacino used to be a very fine actor.

The second one is also good because it shows Vito's back story (and seeing Robert DeNiro and Bruno Kirby so young is great).

The third one is pretty crappy.

The Book is even better!

Godfather 1 & 2 have about 80% of the book in it, in one of the more faithful adaptations ever done.

After watching Godfather 1 take abreak and watch Coppalas film that he made next "The Conversation" a severly underrated masterpiece.

Then go on the Godfather 2

As for reading Godfather is great, and Puzo's next novel "Fools Die" is better than most of the rest of his work. dont even bother with the "sequel" to the Godfather "The Silician"

As for Godfather 3 the only thing good about it is for Film buffs. For the Opening of Godfather3 there is a big party honoring Micheal Corleone (Ala the Opening Wedding in Godfather 1) Coppala tracked down as many of the cast from the Connie carleones wedding reception. Bridesmaids, screeming kids, guests, goons etc all he could find of course 20 years older to play in Godfather 3 opening.

Although, it was a great wasted storyline, because John Paul 1 died after a few weeks, then John Paul II was elected. One of the Few tid bits that came out of the behind the screen politicking leading up to John Paul II election as Pope was that he promised to make no changes to the Directors of the Vacitcan bank for 10 years. thus a chance was lost to tie in the movie with a real life event. i.e. Johnny Fontaine=Frank Sinatra
Micheal Corloene going to Vegas= Bugsy Seigle

I don't really think of either Godfather movie (Part III doesn't exist in my universe) as a "mob movie" per se-- really they are a slice of the American immigrant experience, viewed through a particularly idiosyncratic family.

And I join in the recommendation of "The Conversation". I do not know why it does not come up in conversations about terrific movies more often. The 70's were a great time for American cinema.

I love Godfather I & II. They are great for leisurely afternoon watching. I, however, cannot stand the "Godfather Saga" on TNT or whichever where they show the events from the two movies in chronological order instead of how it is shown on film. Can you imagine someone doing that for Casablanca and thinking it is okay? (Scene 1, Isla and Rick driving down road in Paris, happy as clams... BAH!!)

And although I admit Godfather III is not as good as I or II, I don't fathom the disrespect it gets. It's not THAT crappy.

Luca Brasi sleeps with the fishes :)

There's just something about Pt3 that pushes me away - I've never been able to get into it long enough to figure out some twists and turns, and it shouldn't be that difficult.

I and II are great!

The problem with the third movie is one of scale. It is easy to accept the rise of the Corleone family up through the events of the first two movies, even including Congressional investigations, because the movies show us that Vito and Michael have risen to this point by using personal relationships in a way that is more or less familiar to us. That's the brilliance of the wedding scene-- as you watch it you recognize it, and after you have seen it every wedding reminds you of it.

Once you drag the Vatican into it it becomes something else.

I feel the same way about canoli.

Bill: I disagree about scale. Religion and religious issues have infused the film as much as family and traditions. The church's official corrupt embrace of Michael in III is a natural progression in this story of corrupted family and religious virtues. It's sad, moving, troubling, but never boring. It is a Godfather film. It isn't of the same caliber, but it is of the same ilk.