"Eight astronauts strapped to the back of a bomb. My bomb." 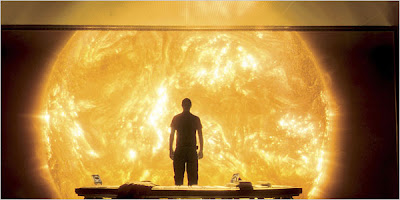 A friend of mine sent me a copy of a science fiction movie from a couple of years ago called Sunshine, which I'd never heard of before. And it's really a very good film.

The plot isn't terribly complex: at some indeterminate point in the future, the Sun is "going out", but some physicist figures out how to make a kind of "solar bomb" that can restart the Sun. A ship is sent to deliver this bomb into the Sun, but that expedition fails for unknown reasons, so a second expedition is sent. Shortly into the movie, the ship – called Icarus II, for obvious reasons, with the first ship, the failed one, being Icarus I -- passes beyond a spot beyond which they can send no more messages back to Earth. From that moment on they are alone, and from that moment on, things start going awry.

First off, this is a movie that knows how to handle an implausible Maguffin. If a Star Trek; The Next Generation episode had a star going out and the crew trying to "restart" it, we'd be treated to at least one scene, if not more, in which lots of folderol about subatomic particles and space-time continua and the like would be bandied about in hopes of making it all sound as though it's not what it is: pure BS. Instead, this movie gives the whole "dying Sun" thing exactly as much explanation as I give here in this post. The movie doesn't care about the plausibility of the premise or how it could be glossed over; an opening monologue establishes the situation in four or five sentences, and then we're on board the Icarus II.

This movie falls into that most reliably involving of genres: the "diverse group of people have to get something done by a certain time or absolute disaster will unfold, and meanwhile, everything that could possibly go wrong does" tale. Will the crew have enough oxygen for a return trip? Will the ship suffer damage in a meteor storm? Will the bomb even work? Will they succumb to whatever mysterious fate awaited the Icarus I? Will they manage to keep their psyches in check? The answers to at least a few of those questions are "No", which is what makes for a gripping movie.

The film takes its time in getting moving, introducing us to its characters and creating some real sense of wonder in a few terrific scenes, such as one man's desire to look upon the brightest sunlight he can, and another when the entire crew gathers before an immense viewscreen to watch a transit across the solar surface of the planet Mercury. When the tension starts to increase, it does so slowly at first, and then things get worse faster and faster, as the ship gets closer and closer to the sun. There are many excellent character moments -- most of the characters in the film are memorable people, refreshingly enough -- and the various moral dilemmas they all end up facing all seem quite real. Visually, the film is extremely well done; the effects aren't terribly complex, but they don't need to be and despite the film's plot involving the sun going out, everything the movie shows us feels plausible enough. You really get the feeling that if we build a big ship for an expedition to the Sun at some point, that's what the ship is going to look like.

The movie starts out slowly, and builds up its tension until it's one of the more effective SF thrillers I've seen. There is a gradual shift in tone in the film -- I don't want to say too much, but eventually there's a killer on the loose -- but it all worked for me, very well. This movie drew me in and did so quickly.

The performances are all terrific; the cast is necessarily small, and fortunately there is excellent chemistry amongst them, which is an essential ingredient for a film as tightly focused as this one. The only actor I recognized by name was Michelle Yeoh as one of the crewmembers, although I was impressed by Rose Byrne (who, when I looked her up, turns out to be the actress who played Dorme in Star Wars Episode II: Attack of the Clones, a performance of a bit part that I praised a short time ago) and Cillian Murphy as "Capa", an actor whose looks remind me eerily of Judson Scott. (Holy crap, Judson Scott is about to be 57 years old! How did that happen!)

I recommend Sunshine highly. I found it a deeply satisfying SF film.
scrawled here by Kelly Sedinger at 1:04 PM

Directed by Danny Boyle - the guy who did Trainspotting. A major director at this point.

code name: weleour - like velour but with an accent