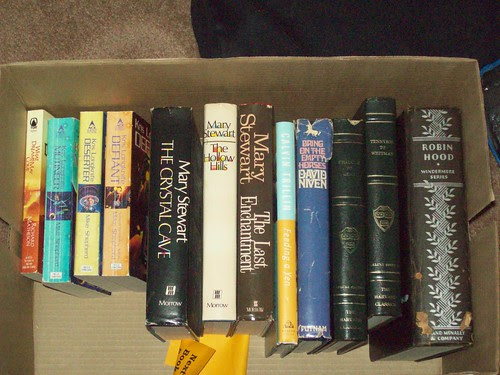 This weekend marks the quarterly Used Book Sale at my local public library, and this photo shows the books I bought for myself. (There were other things for The Wife and The Daughter.) This sale was more productive, owing to the fact that they were able to have the sale in the usual room again; the sale in March was put in a tiny room about one-third the size of the usual room, owing to remodeling that was going on at the time.

From left to right, we have:

:: What Dreams May Come, by Richard Matheson. I never saw the movie, but I like Matheson a lot.

:: Three SF books featuring a heroine named "Kris Longknife". I'm not sure I've ever heard of these before, but they looked fun, so there they are.

:: Mary Stewart's King Arthur trilogy. (The books are in order.) I was thinking a few weeks ago that I really should re-read these, as I adored them when I first read them way back in 1992 and I've never re-read them since. Now I have nicer hardcovers to read. My MMPB's of these books are OK, but the problem is that with many fantasy books published MMPB format in the late 80s and early 90s, maps tended to be nearly illegible. (I had a MMPB Lord of the Rings where the map was almost completely unreadable.)

(There was a fourth book that Stewart added later on, called The Wicked Day, which tells the story of Camelot's fall from the viewpoint of Mordred. She wrote a sympathetic Mordred that was so effective that I've had trouble with standard, "villainous" Mordreds ever since.)

:: A food book by Calvin Trillin. I've heard good things about Trillin and not much read him.

:: Bring On the Empty Horses! by David Niven. I've wanted to read this for years, but the Buffalo and Erie County Public Library's copy is non-circulating, for some reason. This is a Hollywood memoir by one of the wittiest men ever. (The title is from one of the more notable set directions from Michael Curtiz, one of Hollywood's great directors but also a man who had trouble with English as a second language. When, after a number of nominations, he finally won the Oscar, he started his speech with: "Always a bridesmaid, and never a mother." My favorite Curtiz fractured-English tale is when he told someone he wanted a poodle on the set, so the prop guy went and got him a poodle; Curtiz exploded and yelled, "Not a dog! A poodle! A poodle of water!") Anyway.

:: Two poetry collections, because I can't help myself. Too bad they didn't have the third volume.

:: An old illustrated version of Robin Hood. I picked it up, hoping it was Howard Pyle, but it wasn't. Still, it's a handsome volume and I'll do more research on it at some point.

All in all, a satisfying take, even if I didn't see anything that I thought would make a good sale on eBay.

scrawled here by Kelly Sedinger at 9:46 AM

Your Calvin Trillin food book, while a good one, is not one of the classics IMO. Look for The Tummy Trilogy, which collects his three classic food books from his travels for the New Yorker in the 70s.