So here's something new I'll be trying for a bit, based on my experience in 2020. I wrote a lot last year about Ludwig van Beethoven, which was fitting since 2020 marked his 250th birthday. I don't plan to focus on a specific composer every year (or every day or every month) for their particular anniversaries, but I did greatly enjoy spending a lot of time in a specific composer's sound world, so that's what I'm going to try to do for a while: spending several months focusing on a particular composer. This isn't to say that I'll only be listening to the music of a particular composer, but I'll be focusing that way. 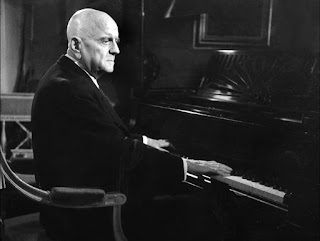 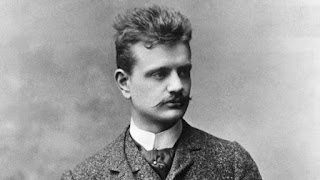 Quite a stern looking fellow, wasn't he? (Obviously the second photo is Sibelius as a younger man. I screwed up the uploading and decided to leave it.)

Sibelius is known as Finland's greatest composer, and there's some good reason for that. From what I've read, Sibelius's reputation has waxed, waned, and waxed again in the almost a hundred years since his main period of active composition came to an end. After the mid 1920s, Sibelius's output dried up almost completely, and he lived out the remainder of his years--thirty of them, until he died in 1957 at the age of 91--composing little. As David Dubal notes in his book The Essential Canon of Classical Music, "[Sibelius's] lifespan far exceeded his ability to fathom new artistic developments."

Sibelius, like Rachmaninov (whose own long lifespan took place within the boundaries of Sibelius's), straddled the transition from Romanticism to Modernism, and thus the transition from traditional tonality to the various systems that followed it. While Rachmaninov kept composing music that made him seem more and more anachronistic as his life progressed (though it did his reputation no harm), Sibelius's music is more individualistic, so his reputation has had a harder time. Dubal, again:

Sibelius's place in music history was once more secure than it is now. Around 1920 in various quarters, he was proclaimed the ideal modern composer and an antidote to the seeming chaos of Schoenberg, Stravinsky, and Bartok. But by the late 1940s, his reputation had begun to decline. The composer Virgil Thompson, listening to the great Seventh Symphony, wrote, "I do not believe for a moment that its gray and dirty-brown orchestral coloring is a depiction of either the Finnish soul or the Finnish landscape...I think Sibelius just orchestrates badly." Thirty years later Harold Schoenberg called Sibelius "a dated bore" but conceded for him "an honorable place among the minor composers," while giving to the Danish Carl Nielsen "as much sweep, even more power, and a more universal message."

I cannot at this point comment on Thompson's impression of Sibelius's Symphony No. 7, as I haven't heard it yet. We'll see. And I may decide that Schonberg is incorrect; again, we'll see. I do like Carl Nielsen a great deal, but that's for another time.

In my college years, I only played two works by Sibelius, on the same program, in my freshman year. The big one was the Violin Concerto, which I disliked quite a bit at the time. It was a hard setting in which to get to know a piece of music, though, and I fully grant that my view at the time was very poorly informed. At that point, the orchestra in college didn't even have a full complement of players until just before the performances, when our music director (my beloved Dr. Janice Wade) would bring in musicians from surrounding towns to fill out the group. On the one hand, I didn't know shit, being only 17 (I certainly thought I knew shit, but believe me, I most certainly did not), but on the other hand, that's also a very difficult scenario under which to form a fair impression of a work.

The other piece was Finlandia, which is by far Sibelius's most well-known and popular work. It is literally a musical love-letter to Sibelius's own homeland, and it chock full of orchestral color, some deeply exciting material (the middle section somehow feels march-like without being a march), and then a deeply beautiful hymn-like melody that sounds like a folk anthem (even though all the melodies in the piece are of Sibelius's own invention). Finlandia has become as beloved in Finland as The Stars and Stripes Forever has to Americans, and it's as good a place as any to enter Sibelius's sound world. This particular performance adds a choir to the proceedings, for stirring effect.

In future weeks I'll look at Sibelius's tone poems (many inspired by the folk epics of Finnish legend), his symphonies, and, yes, that Violin Concerto that vexed me at seventeen. Stay tuned!

Finlandia makes me weep, for a bunch of reasons.