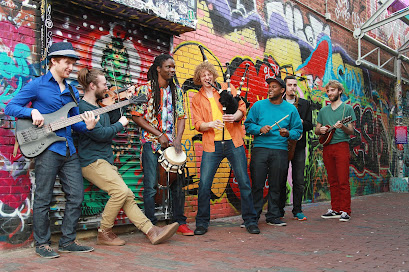 The other night I was looking for some new Celtic music to listen to, so I hopped on over to Google and searched for "Best Celtic Albums of 2020" (or maybe it was 2019). This brought up several articles, and in one of those articles I found mention of an album by a band called "Soulsha". Soulsha hails from Boston, MA, and they aren't just a Celtic band: they perform a fusion of Celtic and African music, which is a mix that just sounds fascinating, doesn't it? Can you imagine blending those two highly melodic and rhythmic musical heritages?

Well, Soulsha can imagine it. This is from their website:

Soulful call and response singing, masterful improvisation, traditional Senegalese and Scottish dancing and incredible energy make every Soulsha show an unforgettable live experience. Intricate rhythms, soaring bagpipe melodies, and New Orleans-infused horn lines come together seamlessly, and the joy of music rises above all differences, reminding us that we’re all in this together.

The band formed through a series of serendipitous meetings in the thriving and intersecting multi-cultural melting pot of Boston. Many of the members are virtuosic and highly esteemed tradition-bearers in their styles. In Soulsha, they saw a chance to bridge divides. The music they’ve created is a conversation between cultures that breaks down all the boundaries, moving the audience to abandon their assumptions as they lose themselves on the dance floor.

While it shares obvious roots with Afro-Celt Sound System’s electronic fusion, the funk-inspired sound of Soulsha puts tradition and interchange center stage, bringing the party energy of Rebirth Brass Band, and the cultural gravitas of masters like Malian Toumani Diabaté.

I listened to their debut album, Carry It On, and I found it an absolute delight. Their music just teems with energy, and the influences of both the Celtic side and the African side can be distinctly heard, and those two styles play together much more easily than one might think at first. Here is "Rhythm's In the Melody", a single from Soulsha's debut album. Enjoy!