Democracy: I Did It 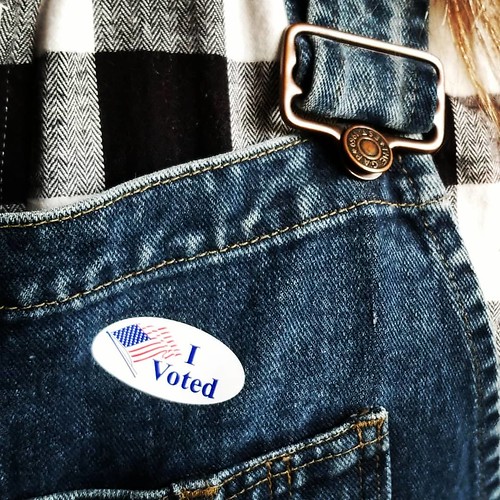 Specifically, I did the democracy thing the other day, on Saturday, when early voting started in New York State. I got to the polling place (a local community center) about ten minutes before it opened, and at that point there was already a line, which extended into the parking lot. This was strange; the building is big and is surrounded by very ample sidewalks, and yet the people queued up in the parking lot. It took a cop to come along and tell everyone to queue on the sidewalk instead of the parking lot. People are weird.

I waited in line for probably about half an hour before I finally got inside. The attendants looked up my name and printed my ballot on the spot (hooray to New York for not passing some dumb-assed Voter ID law!), and then I voted. It definitely felt a little bit strange to vote early. With the exception of my very first election, when I was in college and thus had to vote via absentee ballot, I have always voted on Election Day at my designated polling place. It does seem odd, having joined with millions of my fellow citizens in having already voted, and yet we won't have any idea how this all turns out for at least another five days. Here's hoping it's only five days, and here's hoping that we Americans are sweeping the forty-sixth President of the United States into office on the strength of numbers too big to challenge.

Oh, and this was the first time I ever got an "I voted" sticker, so huzzah for that! That sticker is a nice accessory for my overalls, isn't it?

I only vote for the sticker. I gave blood for the pins.

I hope you didn’t vote for JOE...
GBY

Indeed I did, and would do so again.