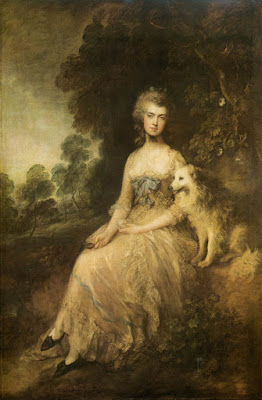 One of a series of occasional posts for National Poetry Month.

One of my major resolutions for 2019 is to read more poetry. I've always enjoyed poetry and I always try to read some here and there, but this year I'm trying to be even more serious about it, even to the point of starting a poetry reading journal in which I record thoughts about poems as I read them. I'm also reading some books about poetry in an ongoing attempt to strengthen this particular literary muscle of mine.

I discovered this poem purely serendipitously: by thumbing through one of my copies of The Oxford Book of English Verse. (I have multiple editions of this book, because its contents have not been constant through the many years of its publication, and alongside the eternals are the lesser-so works, and poems are like music in that many that deserve to live on don't always do so). I found a single poem by a poet named Mary Robinson, of whom I don't remember ever hearing before. Here is the poem:

Wives who laugh at passive spouses;
Theatres, and meeting-houses;
Balls, where simp’ring misses languish;
Hospitals, and groans of anguish.

Authors who can’t earn a dinner;
Many a subtle rogue a winner;
Fugitives for shelter seeking;
Misers hoarding, tradesmen breaking.

Some in luxury delighting;
More in talking than in fighting;
Lovers old, and beaux decrepid;
Lordlings empty and insipid.


I read this poem three times in a row the first time I found it, and I've been returning to it ever since. More than that, this single poem has made me keenly interested in Robinson herself, who seems to have lived quite a colorful life. She wasn't just a poet. She was an early feminist, and an actress (she would be nickanmed "Perdita" after she did notable performances in that role in Shakespeare's The Winter's Tale), and later she became the mistress of the Prince of Wales, before he himself went on to become King George III. Though she eventually died in poverty, Robinson has come in for reappraisal in recent years. I have even been reading her own memoirs, and so far they are fascinating (I am only in the early going, before she had struck out on her own after a childhood of paternal neglect and maternal overwork.)

But back to January, 1795. The poem is simply a word painting, creating a sense of a specific place (London) at a specific time. There are no sentences in the poem, just fragments comprising a series of quatrains which are themselves comprised of rhyming couplets. Throughout Robinson juxtaposes specific details, often combining a beautiful one with an ugly one: "Lofty mansions, warm and spacious; / Courtiers cringing and voracious." This structure puts me in mind of Charles Dickens's amazing opening line to A Tale of Two Cities: "It was the best of times, it was the worst of times...." I wonder if Dickens had occasion to read Robinson's poem.