April Fool's Day! (and the beginning of National Poetry Month) 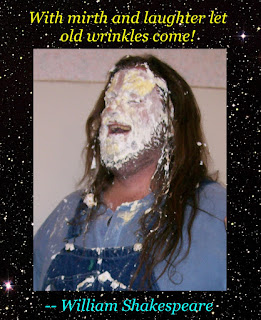 It's April Fools Day! I'm not a huge fan of this day as a celebration of pranking people, seeing if you can embarrass them or get them to believe some false news story or the like. But I'd be all for a day in which we celebrate laughter and All Things Funny, whether it's sophisticated wordplay or gonzo silliness or a good old pie in the face. Here are a few things that always hit my funny bone:


(Here, on an episode of Cheers, Sam finds that his bar has been bricked in as a prank by Gary of Gary's Old Town Tavern...but all is well because he's got an Irish band coming....)

And here, because National Poetry Month is starting today, is a poem about laughter by Ella Wheeler Wilcox.

Though with the gods the world is cumbered,
Gods unnamed, and gods unnumbered,
Never god was known to be
Who had not his devotee.
So I dedicate to mine,
Here in verse, my temple-shrine.

'Tis not Ares - mighty Mars,
Who can give success in wars;
'Tis not Morpheus, who doth keep
Guard above us while we sleep;
'Tis not Venus, she whose duty
'Tis to give us love and beauty.
Hail to these, and others, after
Momus, gleesome god of laughter.

Quirinus would guard my health,
Plutus would insure me wealth;
Mercury looks after trade,
Hera smiles on youth and maid.
All are kind, I own their worth,
After Momus, god of mirth.

Though Apollo, out of spite,
Hides away his face of light,
Though Minerva looks askance,
Deigning me no smiling glance,
Kings and queens may envy me
While I claim the god of glee.

Wisdom wearies, Love has wings --
Wealth makes burdens, Pleasure stings,
Glory proves a thorny crown --
So all gifts the gods throw down
Bring their pains and troubles after;
All save Momus, god of laughter.
He alone gives constant joy,
Hail to Momus, happy boy!


I'll be posting about poetry off and on throughout the month. I don't promise a post every day, but most days.
scrawled here by Kelly Sedinger at 7:34 PM

Email ThisBlogThis!Share to TwitterShare to FacebookShare to Pinterest
Labels: Pie in the Face, Poetry

That TAXI bit made me LOL AGAIN!