Just a grab-bag of some thoughts on stuff going on....

:: I posted the following on a Facebook exchange debating the ALS Ice Bucket Challenge. This wasn't really in response to anything anyone specifically said, but more in response to some more general negativity I've seen about it. (As such, it was probably out-of-place on that particular friend's feed, for which I feel a tad guilty.)

Here's my thing: fundraising of every kind, everywhere, is more successful when there's something "fun" involved. It's why charities have big galas and parties. It's why churches and small town organization have chicken barbecues. It's they the Jerry Lewis Telethon isn't twelve hours of scrolling text with telephone numbers. It's why people trying to raise money to help individuals with massive medical bills have events with basket raffles and Chinese auctions. It's why PBS stations air their really popular shows and specials at pledge time. I can't remember where I read it, but the other day I read an article where some charity in some city had an annual gala which was their BIG fundraising event each year, but one year they decided to not hold it and simply ask for the donations anyway, and their fundraising fell through the floor. We may not necessarily LIKE this aspect of things, but it's simply the way things are. All the ALS people did was figure out a way to tap into one of the newer avenues people are having fun with, and frankly, if it hadn't been this, it would have been something else.

That said, I cannot for the life of me have any problem with this whole endeavor. It's a horrible disease (my wife's grandfather died of it, just a few weeks after we started dating), but really -- they ALL are. If we approach fundraising with the solemnity of the disease itself, nothing would ever get funded much at all.


I stand by all that, even if my posting was rather badly misplaced.

:: As I write this I'm basking in the afterglow of my first-ever Buffalo Bills preseason game. Oh wait, did I say "basking in the afterglow"? I meant to say, "waiting for the stench cloud to dissipate". I know, it's just preseason and it's the last preseason game, so it's not like either team was really trying all that hard, but boy howdy, the Bills just looked fundamentally awful. They attempted no long pass plays, they were bumbling and mistake-prone, the backup quarterback hit exactly one guy on the numbers, and I saw four punts in the single half of football we bothered watching. (The tickets were free; no way do we pay to get in there.)

That said, I am obviously no expert, but I still do not see why it's taken for absolute faith around here that Ralph Wilson Stadium is an awful place that needs to be retired in favor of a spectacular new facility that's "easier to get to". RWS is plenty easy to get to, and I found it perfectly nice and structurally fine. Maybe some significant work to the exterior, like they did in Green Bay with Lambeau? Anyway, for my money, RWS is fine, and anyway, I'm loath to spend upwards of a billion bucks of public money on a facility just to help a collection of billionaires rake in even more cash. As for the current renovations to the Ralph, I like the place, although there could be some more signage directing where to go in the area between the ticketed entry queue and the actual concourses.

:: Nobody ever gets to bitch about Presidents and their vacations again. I'm done listening to that shit. It's just plain dumb, seeing as how in this day and age, with the technology we have, a President could run things from the Unabomber's shack if he or she wanted to. Enough.

::  Speaking of vacations and such: it's Labor Day Weekend, which reminds me of something I read once: three day weekends are better when the extra day off is on Friday, rather than Monday, because that way it feels like two Saturdays followed by a Sunday, as opposed to a Saturday followed by two Sundays. I kind of agree with that -- July 4 weekend this year broke that way, simply because the 4th was on Friday -- but I also rather like having the long weekend and then a shortened work week on the other side. Short weeks are nice, which is why I always try to schedule my vacations to straddle two different work weeks, essentially taking a six- or seven-day weekend, bracketed by two two or three-day work weeks.

:: The other day, Buffalo's new-and-improving waterfront area became home to a sculpture originally from Cincinnati, called "Shark Girl". It's a little girl with the head of a shark. I am not making this up. Behold: 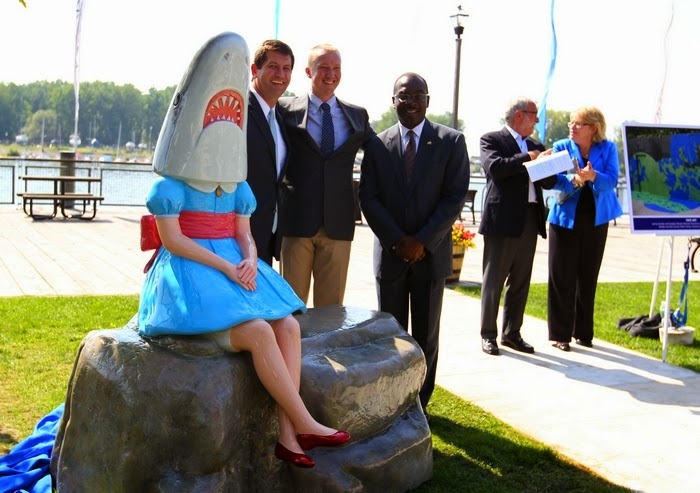 As art, I kinda like it. It's not really my cup of tea, but it is a whimsical thing and definitely unusual enough that it will have people going to see it and talking about it and so on. My only complaint, such as it is, was that such a high-profile art installation here wasn't seen as an opportunity to feature a local artist. However, I'm told that this is only the beginning, and that local artists will be featured at Canalside. Good.

Head of a shark. What will they think of next.

:: I'm not sure who I want to win MasterChef this year. I'm leaning toward Leslie, because he's really gonzo, but he's also best taken, I think, in small doses. Who I do not want to see win is Courtney, who has the single most annoying "Fake perfect Good Housekeeping wife" thing going on, along with incredibly annoying arrogance regarding her own kitchen skills. True, she has yet to screw up in any way at all, but land sakes alive, is she annoying.

:: A new law: If you have any kind of special request as regards bagging your groceries at all, then I don't care if you're only buying five things, go through the other line. Your "I want this item in double paper, double plastic and then roll it up and put it in a third bag" bullshit forfeits your right to use the express lane.

:: Finally, on a topic near and dear to my heart, I posted the following on Tumblr earlier:

So I’m seeing that on the heels of the ALS Ice Bucket Challenge, some folks are trying to make pie-in-the-face challenges the next thing. As you might expect I am TOTALLY on board with this, but I fear the well may be somewhat tapped, and folks are trying to do this in “honor” of several different diseases, such as depression and Huntington’s Disease. Again, this is great, but I suspect this might have the effect of diluting things.

More to the point, though, is that the “pie” is often a bit of whipped cream from a spray can on a paper plate. This is well below the standards we should be willing to accept as Americans, folks! If you’re going to experience the joy that is a pie in the face, make it happen with a REAL pie and not just a dollop of canned stuff! A thing worth doing is a thing worth doing RIGHT. Come on, America! We invented the pie-in-the-face routine! Let’s show the world how it’s done!

[Insert picture of Sam the Eagle here. Or something suitably pompous.]


Remember, folks, don't do this: 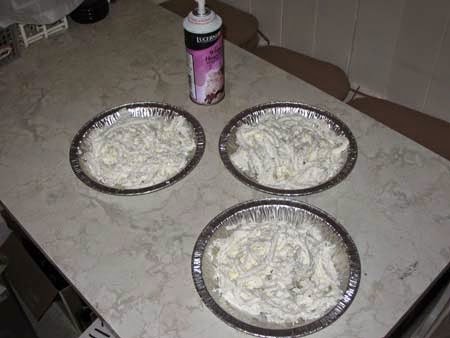 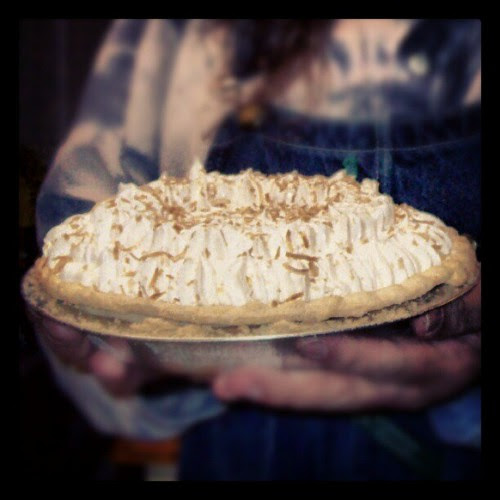 Or follow the instructions in the "A Pie in the Face is a Wonderful Thing" page to do this: 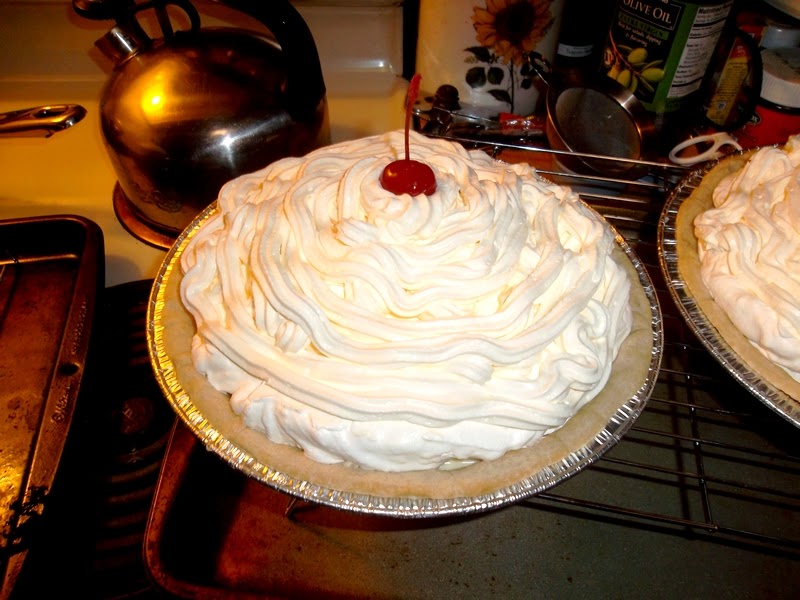 That's all that's running through my head right now, folks. Have a great Labor Day weekend! (I'm not taking off from posting, though.)

scrawled here by Kelly Sedinger at 12:05 AM

Neither Becca nor I can stand Courtney; she's just so grating. She's that girl you knew in grade school who was just so insufferably smug about how great she was. There's a real teacher's pet thing going on with her that just rubs me the wrong way.

Two things about ALS; 1) there was this Internet rubbish that 73% of the money goes to overhead; untrue; 2) ALS assn was trying to get a TM on Ice Bucket Challenge; that WAS true, but they have abandoned that idea, wisely.