This was my celebratory treat last evening: a wee bit o'single malt Scotch! Why, you ask? Because I completed the edits on Princesses In SPACE!!! (not the actual title). There will still be one more round of proofreading, but no more major editing. The body of the book is now in what will be its final form, minus typographical screwups that I haven't yet rooted out.

I enjoyed this part of the process immensely, and I found that a big help was actually having already written two drafts of the second book in this series. I know my characters better now, so I was able to fine-tune the characterizations in Book I to bring them more in line with the way I've come to know them through Book II. That's big, and I'd generally advise anyone writing a series to get at least through their second book before they make a book push to get the first one out in the world.

I was also able to add in some material here and there, mostly little details, that anticipate the second book (as well as future books). This is stuff that someone reading Book I for the first time won't notice, but maybe when they re-read Book I after reading subsequent volumes, they'll see it. It's not unlike the opening scene of Harry Potter and the Sorceror's Stone, in which Hagrid shows up on a motorcycle that he borrowed from "young Sirius Black". I'll wager nobody reading that book the first time even so much as filed that name away for future reference, but it's a nice little Easter egg for people who go back and look, and it's those kinds of details that add up to a well-considered world.

One thing that makes me a bit wary is the fact that once this book is out there, it's out there. The details in the book are set, which is slightly daunting. My approach to world-building is to toss stuff in as needed. I don't do a whole lot of mapmaking and world-building work before I start actual writing; my approach is "Huh, I need a mountain there, so plop! There's now a mountain there." And then I go back when editing and justify the mountain's presence. In a lot of ways, though, once the first book is out, I effectively rule out the possibility of adding mountains to certain places. Mostly this won't be a problem, although there are a couple of names in the book that I've changed literally every time I've made a round of edits, because I just haven't hit on the exact right name for that person or thing just yet. Once the book is out, though, that's it: the name is the name. I wonder if Tolkien struggled with that: "God, I hate the name 'Baggins', but the book's out, so it's Baggins all the way out now."

But anyway! The work goes on. What's left to do? Lots!

-Formatting
-Setting up my Official Author Site
-Completing the Book Trailer (this, by the way, will be the vehicle by which the Actual Title is unveiled)
-Creating the cover
-Uploading files to CreateSpace
-Ordering proof copies
-Proofing (I think I'll literally read the book backwards for this)
-Finalizing copy
-Creating and ordering author business cards
-Formatting for Kindle release
-Ordering my copies
-Releasing the book into the wild
-Sitting nervously while people read the bloody thing I've been kvetching about for years


Of course, the true rulers of the world still keep me in my place: 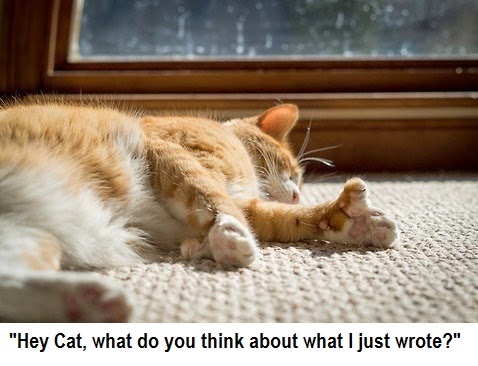 scrawled here by Kelly Sedinger at 10:57 AM

Heh. I interpreted that cat as giving the thumbs-up. (Polydactyl cat, or Boston Thumb Cat as they're sometimes known...)

What kind of whisky did you have? We are having a whisky tasting next weekend so I'm curious.