Tales in the Photo

OK, there's a photo making the rounds on the Internet via various sports fansites and gossip whatevers. It's of a nicely-dressed blond woman making an effort-filled obscene gesture in the face of one of the opposing team's players at an NBA game. (I'll put this below the fold, because it is an obscene gesture.) 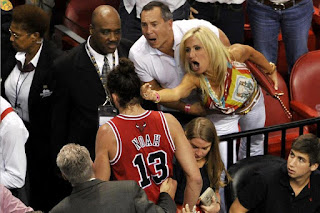 I really don't have anything much to say about the act she's committing, other than this is yet one more example of why I am less and less interested in sports fandom, seeing as how it often leads to this kind of classless rage that's just ugly and useless.

What gets me about this photo, though, isn't the lady. Nor is it her date, who is also apparently shouting things whilst holding her to keep her from falling over the rail. Nor is it even the player who has his head down and just wants to get off the floor. What gets me is the black fellow in the suit. I'm not sure what he does there, but he's clearly an employee of some sort; he has a lanyard 'round his neck. Maybe he's stadium security or an NBA official or something like that. But with this going on right in front of him, he's paying attention to none of it. He's just kind-of staring off into the space between the player and the extended middle finger being offered, and his expression is so blank and hopeless that he might as well be a middle-manager in the office of some company that's having low-to-moderate sales growth this year.

So in the middle of "I just wanna go the locker room" and "I HATE YOU SO MUCH AGGHHHHH!!!", there's this guy apparently thinking, "When this is over, I gotta finish my TPS reports."

Is that Shaq? He's clearly taller than the player leaving the court...

Man in the suit has probably seen that kind of thing so much that he's numb to it.

I agree with you; that kind of classless rage just undoes me. What purpose does it possibly serve?

Orwell's Two-Minute Hate? Keeping our societal anger diverted into these useless avenues instead of focused on things that actually matter? Or am I just revealing my own contempt for and utter disinterest in the world of sports?