:: I saw this picture on Facebook yesterday, paying tribute to The Princess Bride.

Turns out that it's created by a guy who sells them on Etsy. He's got more, including this Firefly one! 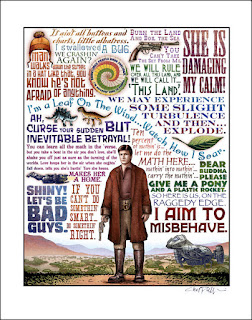 ::  I saw this on Tumblr yesterday and it's in perfect harmony with my increasingly oddity-centric way of thinking.

Tumblr originally credited Virus Comics for this. I haven't found it on that site, but the art certainly matches.

Thanks for the Sunday post! The Princess Bride brought me here, Firefly cemented the deal, and the Weird comic was just lagniappe. Thanks for brightening my day!