Chronicling some recent adventures, misadventures, and regular old humdrum ventures of life, through the magic of digital photography! Huzzah!!!

Photos after the break....

First of all, Winter Storm Nemo came through the Northeast, as some of you may have heard. As is usually the case with Nor'easters, Buffalo-Niagara was mainly spared the big hit. Northern Niagara County (about 40 miles north of Casa Jaquandor) got hit with about a foot and a half of snow, but down here in the Southtowns, we didn't get much at all, about four or five inches. Here's what it looked like when the snow was starting to accumulate: 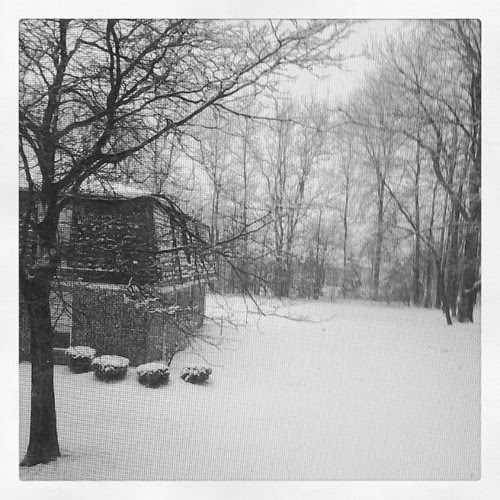 And here's what it looked like the next morning: 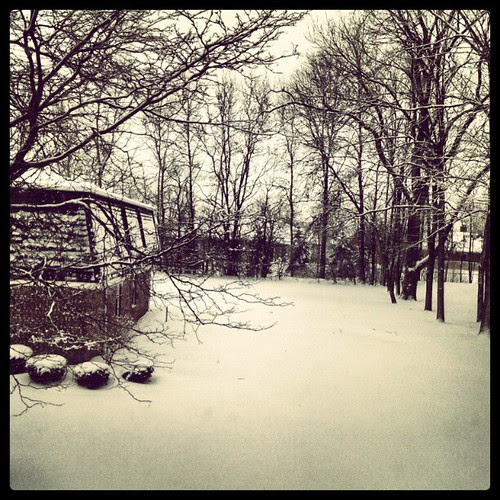 Ayup. Not much difference!

Of course, the cats responded to this climatic threat as they always do: 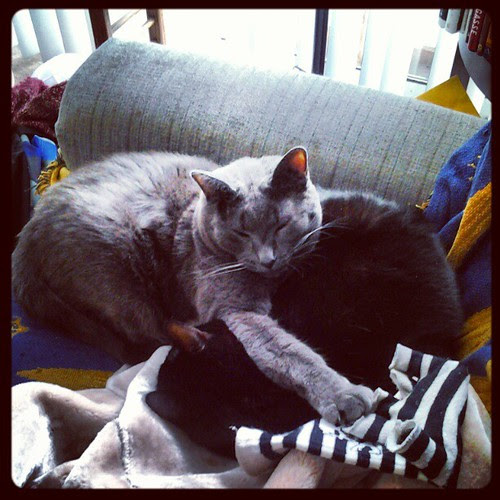 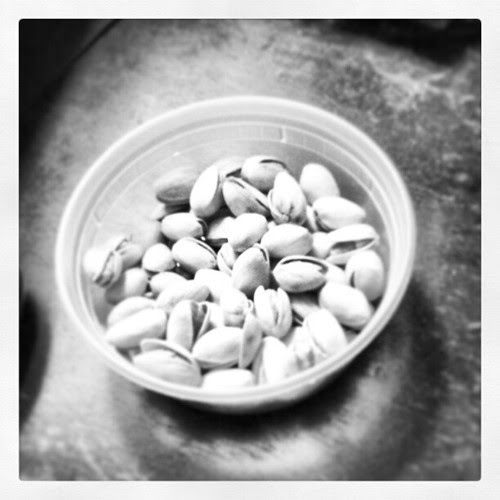 I'm glad they don't color the damned things pink anymore, though! That was pretty annoying. I love the scene in the original Naked Gun movie where Leslie Nielsen and George Carter are staking someone out, and they're passing the time by eating pistachios in their car. Evidently they've been there a while, because a solid inch around both their lips is solid pink and there's an enormous pile of spent shells outside the car door.

Speaking of food, here's what I look like when shopping: 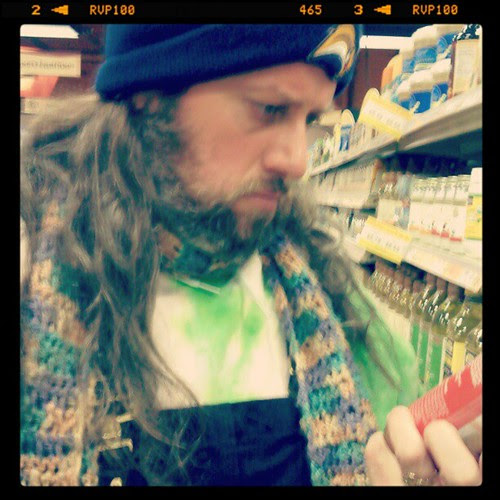 Apparently I'm incredibly angry about what I see on the label there. Weird, huh? Seriously, I'm starting to think I'm the human version of Grumpy Cat.

Anyway, on with the shopping.... 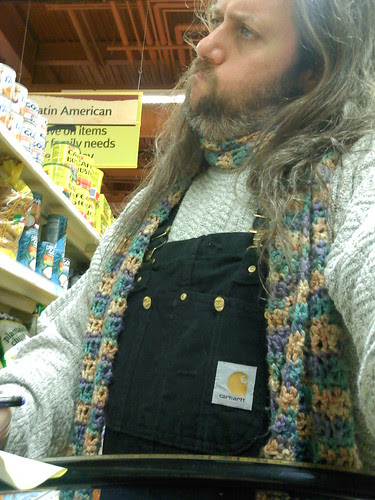 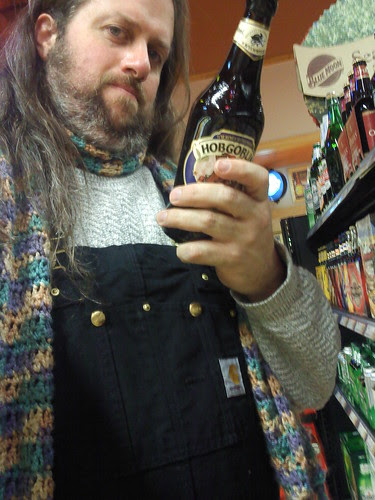 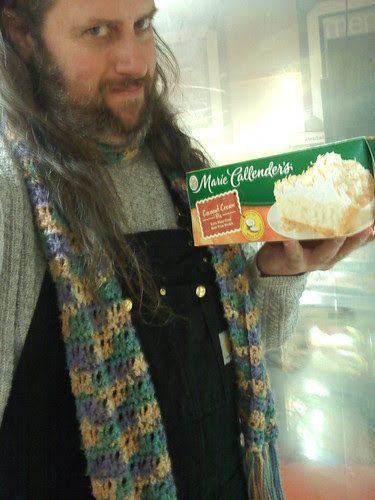 No, I didn't get the Hobgoblin Ale. Nor did I get the coconut cream pie, alas!

I continue to be fascinated with my two pairs of Carhartt overalls, which are amazingly comfy and cozy in the cool weather. The only problem I have thus far is that, being as they are, respectively, black and brown (instead of blue denim or hickory striped), they attract cat hair like crazy. So every time I wear them out of the apartment, I have to go through this ritual first: 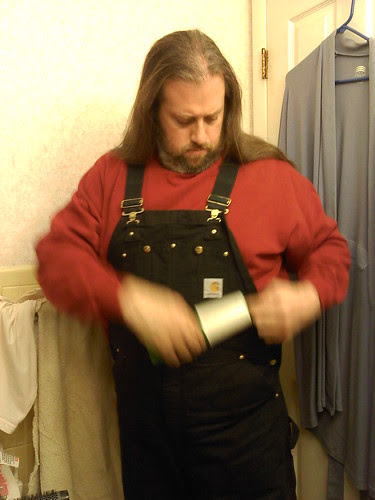 I've also decided of late that I own too many dark-colored shirts and sweaters, so I'm trying to diversify a bit. I actually got this nice light-gray sweater at a local consignment store for a few bucks: 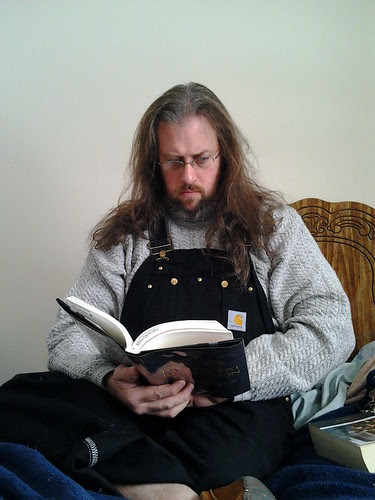 I have also, over the last few years, taken a liking to the color orange, which I was never enamored of before. Strange how tastes change, isn't it?

And finally, I had a moment the other day wherein I fully embraced my inner twelve-year-old. When I was leaving work for the day, I noticed a large sheet of bubble wrap blowing around the parking lot. It was about six feet long and one foot wide, with the larger air pockets. I didn't want it floating around out there forever, so I grabbed it to put it in the trash dumpster outside...and then, the thought occurred to me. What thought? This thought: 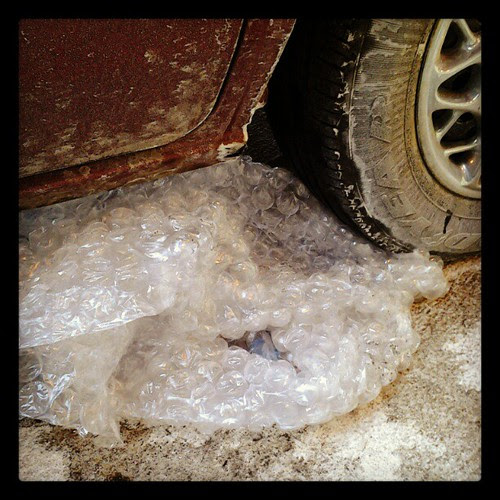 Yes, I tucked one edge under my car's back tire, spread it out before the tire as best I could, rolled down my window so I could hear it, and drove over the bubble wrap. And yes, the sound was glorious. I couldn't believe how loud it was! It was like driving through a corn popper. And then, my fun having been had, I got out and properly disposed of the now-destroyed sheet of bubble wrap.

And that's the fun that's been had lately! It's always an adventure, here at Casa Jaquandor!

You know what they say: "pics, or it didn't happen."

Apparently, it did happen.

Okay, the extra fun you had with your bubble rap sealed it for me...you are a strange person but I love it. Who would have thought of that? Frankly I bet there are more things that would be fun to run over with the car.

You can buy Hobgoblin at the supermarket and you DIDN'T?? You don't know how lucky you are, I have to import that stuff. Their Green Goblin cidre is the best.

Yeah, Jedediah's right. Next time pick up the Hobgoblin. It's fantastic stuff, especially for washing down a steak and kidney pie.

OK, OK, I'll buy the Hobgoblin at some point! In my defense, the stuff is $5 a bottle!

But it's so worth it.

As beers go, Hobgoblin is Meh. If you're interested, I can make some suggestions.