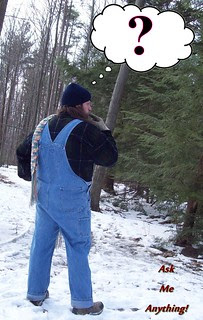 Continuing to answer questions posed in Ask Me Anything! (And feel free to pop in with some more, if you so desire, folks!)

These were e-mailed by a reader who wishes to remain anonymous:

Was your high school safe? Drug or gang problems? Did it have any anti-bullying programs? Do you worry about your daughter's schools? What about the opposite: what were the strengths of your school?

As far as I know, yes, it was pretty safe. There weren't any anti-bullying programs to speak of, as in the mid-to-late 1980s, bullying was mainly seen as a 'rite of passage' kind of thing. You just had to get through it, back then. A shame, but that's just the way it was -- especially in my town, which is a small conservative town on the edges of Northern Appalachia. I took more ribbing than I'm sure I would be subjected to today in a more bullying-conscious era, but even so, I don't think I got it all that badly. Mainly it was directed at my weight. And in all honesty, as I recall it, any bullying I suffered pretty much dried up by tenth grade. I think those kids just eventually lost interest, and my sense of it all was that they bullied because it was expected of them, not because they were bullies. If that makes sense.

Gangs and drugs? If they existed at Allegany Central, I had no idea. I'm sure that there was somebody in my class -- in all classes, really -- who was a source for drugs, if I wanted to go that route. But to this day, I couldn't begin to tell you who that person even was. It probably says something that I was able to get through high school with that degree of blissful unawareness of whatever local criminal element there was. I didn't even learn of some of the stuff that went on until Facebook came along, twenty years later, and I saw lots of photos from back then -- photos of parties attended by lots of my classmates, parties with lots of beer at hand. I never knew about any of that stuff. I just wasn't in that crowd...and yet, I wasn't really ostracized at school or made to feel like I was a lesser person for not being part of that crowd.

Do I worry about The Daughter's school? Yes, but at a low level. Our particular district has a number of good programs in place to minimize that kind of thing -- particulary bullying -- and to address it if it happens. She does seem to be trending, socially, in similar ways to myself and what I know of The Wife's high school experiences, in that she has a cluster of close friends but she's not wildly social or anything.

One thing I do like about her school right now -- the middle school -- is that each grade level changes classes at different times. Any bullying that happened when I was in school mainly happened in the halls when everybody was in the hall at once, so seventh graders had to run the gauntlet of eleventh graders. That doesn't happen at her school now: eighth graders don't change classes at the same time as anyone else. I don't know if the high school does that too, but we'll find out.

Do you volunteer or donate to any charities? How did you pick it/them?

I should probably volunteer more time than I do. I give to the United Way through work (The Store has a long-standing relationship with The United Way), and I donate to a number of different charities and charitable efforts through my church. Mainly I pick-and-choose the ones that sound like they're doing good things, although I do try to keep my donations 'local' as much as possible. I donate to the local library (although not enough).

Hmmmm. I really should do more charitable work...and in terms of volunteering, I am a decent writer....

We've been watching BBC's "Top Gear" on DVDs. Ever watch it? If you did, what did you think? What were your first vehicles, how did you get them (from family? from friends? bought used? new?), and did you love or hate them?

Without getting into too many details, I must in all honesty note that my parents have been of unusually enormous help to my family and I, in the vehicular department. They've come to our automotive rescue more times than anybody has any reasonable hope of anticipating. The number of times we would have been well and truly screwed if not for their staggering generosity and help is...well, it's more than zero. It's more than five, even.

Anyhow: the first car that I owned outright, mine, myself, was a Plymouth Colt. I loved that car. We drove it on our honeymoon. The only downside of that car was that it didn't have A/C. After five wonderful years, it threw a rod while I was driving home on I-90 in Buffalo. This was less than a month after an oil change at one of those 'Kwik-Lube' joints (and that particular business is long-since closed down). I've always wondered if they screwed up the oil change, either by not putting enough in, or not putting the drain plug back on, or just not putting the oil in at all. That car should not have thrown a #*$&%*!! rod. (You know, it's amazing what you remember: I know what I was on my way home from doing. I'd gone to Barnes&Noble to buy a copy of Scott McCloud's Understanding Comics. Very strange. This was before I had a cell phone, so I had to wait for a patrolling cop to come along and call a tow for me.)

The Wife's first car that I knew of was a silver Subaru Justy. Tiny little vehicle that she later wrecked when someone making a left in the opposite direction neglected to, you know, actually see her there. Next was a Geo Metro that got amazing mileage, but which she hated. Interesting....

As for Top Gear, I've never seen it. Should I? What say you, readers? I know nothing about that show, in all honesty!

Email ThisBlogThis!Share to TwitterShare to FacebookShare to Pinterest
Labels: Ask Me Anything February 2013

That grades changing classes at different times thing seems like a very clever approach...I'll have to remember that!