Seeing as how I devoted yesterday's Something for Thursday post to The Sea Hawk, my favorite Errol Flynn movie, I figured, why not use it in this feature too? 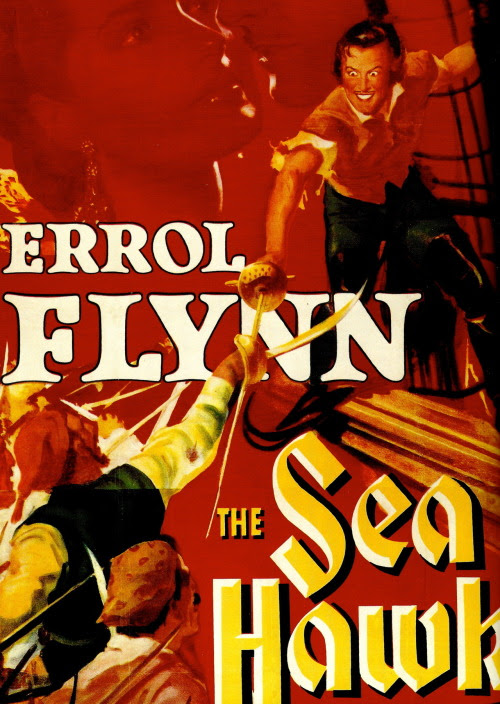 The Sea Hawk tells the story of a rogue English sea captain, Geoffrey Thorpe, who is commanding his ship and preying on Spanish vessels right around the time the Spaniards are building their Armada for their final reckoning against England. Thorpe becomes involved in the various politics involved in convincing Queen Elizabeth I that the Spanish threat is very real and that she must arm her nation and prepare for inevitable war, while Spain tries to convince her that they mean no real threat at all. And by "becomes involved", of course I mean, "has adventures that involve piracy and swordplay and falls in love with a girl". The girl is Dona Maria, played by the beautiful Brenda Marshall (who seems to get a short shrift, in my view, by virtue of her simply not being Olivia de Havilland). The romance between Thorpe and Dona Maria is pretty typical adventure story romance: charming rogue is at first rebuffed by the woman who finds him disreputable, but gradually wins her over as she discovers that there are depths to him that she hadn't realized at first.

They meet in the early scenes when Dona Maria is on her way to England, and her ship is attacked by none other than Captain Thorpe. He doesn't so much take her prisoner as escort her family aboard his ship for safe transit the rest of the way, but he does seem happy to steal her personal jewelry. After the Spanish ship sinks, they're all en route back to England, and Dona Maria is looking out the balcony on the Captain's quarters. Meanwhile, Captain Thorpe is on deck, aware of her presence below, and eventually works up the courage to talk to her. But again she rebuffs him, making clear that she does not wish to socialize with a criminal.

Dona Maria: I'm not in the habit of conversing with thieves. I thought I made that quite clear, Captain Thorpe.

Capt. Geoffrey Thorpe: Why, yes, all except your definition. Tell me, is a thief an Englishman who steals?

Dona Maria: It's anybody who steals... whether it's piracy or robbing women.

Capt. Geoffrey Thorpe: Oh, I see. I've been admiring some of the jewels we found in your chest... particularly the wrought gold. It's Aztec, isn't it? I wonder just how those Indians were persuaded to part with it.


Of course, that doesn't go over well at all, and she turns and disappears inside -- to discover, on the table, the chest containing her jewelry, with a note reading -- in wonderfully ornate penmanship -- "Only a pirate would deprive you of these jewels."

Later on, after a reception with the Queen (during which it's clear that Dona Maria's impression of Thorpe is warming), Thorpe plans a new expedition, a particularly dangerous journey to the New World where he plans to attack the year's gold shipment to Spain. Before he departs, he visits Dona Maria in an English rose garden, a lovely scene that concludes with Captain Thorpe leaving her with this:

Capt. Geoffrey Thorpe: Dona Maria, in a convent in Peru there is a statue that the sisters there call Nuestra Senora de las floras. That's how I shall always think of you, as 'My Lady of the Roses'.


Yeah, he's smooth. Why wouldn't he be, though? He's Errol Flynn, the first of all Shatners.
scrawled here by Kelly Sedinger at 12:30 AM

What a wonderful movie this is... although I have to confess I kind of prefer Captain Blood for reasons I can't quite put my finger on. Possibly because I saw that one first. Anyhow, as much as I enjoyed the Pirates of the Caribbean series, I was disappointed they never quite rose to the same level of fun as these old Flynn movies. Maybe someday somebody will figure out how to do this tone again...