On Snark, and eleven years in Blogistan

The other day was the eleventh anniversary of this blog's first post. Eleven years. And to think, when I started, I figured I'd run out of stuff to say after a year or so! Anyhow, blogging continues to be about the same. Here's what the computer sees: 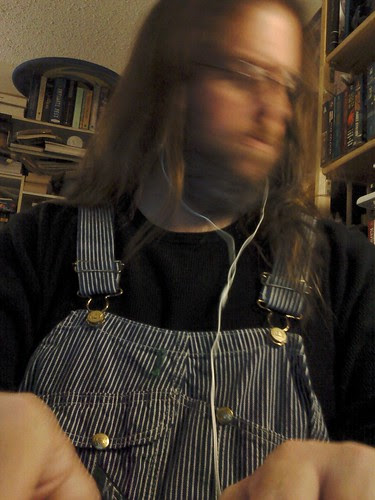 Anyhow, I've had a couple of quotes on my mind of late. Here's the first:

What is in mind is a sort of Chautauqua...that's the only name I can think of for it...like the traveling tent-show Chautauquas that used to move across America, this America, the one that we are now in, an old-time series of popular talks intended to edify and entertain, improve the mind and bring culture and enlightenment to the ears and thoughts of the hearer. The Chautauquas were pushed aside by faster-paced radio, movies and TV, and it seems to me the change was not entirely an improvement. Perhaps because of these changes the stream of national consciousness moves faster now, and is broader, but it seems to run less deep. The old channels cannot contain it and in its search for new ones there seems to be growing havoc and destruction along its banks. In this Chautauqua I would like not to cut any new channels of consciousness but simply dig deeper into old ones that have become silted in with the debris of thoughts grown stale and platitudes too often repeated. "What's new?" is an interesting and broadening eternal question, but one which, if pursued exclusively, results only in an endless parade of trivia and fashion, the silt of tomorrow. I would like, instead, to be concerned with the question "What is best?," a question which cuts deeply rather than broadly, a question whose answers tend to move the silt downstream. There are eras of human history in which the channels of thought have been too deeply cut and no change was possible, and nothing new ever happened, and "best" was a matter of dogma, but that is not the situation now. Now the stream of our common consciousness seems to be obliterating its own banks, losing its central direction and purpose, flooding the lowlands, disconnecting and isolating the highlands and to no particular purpose other than the wasteful fulfillment of its own internal momentum. Some channel deepening seems called for.

--Robert M. Pirsig, Zen and the Art of Motorcycle Maintenance

I find these days that I'm drawn less and less to snark, which is awkward, because my general sense is that snark is the general tone that dominates a great and growing deal of our discourse these days.

Snark is, to me, similar in terms of its application in argument to what Stephen King says about plot in its application to storytelling. Likening stories to fragile fossils buried in the ground, and the writer as the person whose job it is to extricate the fossil from that ground, King indicates that this work might require any number of fine tools. Plot, he says, is in this metaphor a jackhammer, more likely to wreck the fossil than get it out cleanly.

More and more I see snark the same way. Much of the time it seems like arguing from a defensive posture, and the intent is to hit and hit and hit hard, not to convince or explore. And ultimately, I find that worst of all, after too much snark, it all starts to sound the same. And that's a shame, because in the hands of someone who is really good at it, I'll be honest and admit that well-crafted snark can be wonderful to behold.

So this is basically an announcement that I'm going to be cutting way back on the amounts of snark that I generate. Not that I generated much to begin with, but there have been a number of times in recent months that I wrote some very snarky posts, only to delete them because after writing them, I didn't feel any better about the issue at hand. This may also be a big part of why I've stopped listening to sports talk radio shows in favor of podcasts or classical music. There's just a constant parade of negativity that takes its chief form in snark that I'm just finding more and more problematic.

I've never been a large-scale purveyor of snark, but I plan to step back even more. I've sometimes wondered if my general lack of snark is why this blog has never produced larger amounts of traffic than it does, but that no longer bothers me -- in fact, in an odd way, I find it rather liberating, as the amount of traffic I do or do not receive is hardly influenced by what weirdness I choose to do here. But even so, I've decided to just go ahead and lower my snark levels as much as I possibly can. In truth, that won't effect this blog too much, but I've already been thinking along this line, and to that end, I've found myself rejecting tweets or Facebook status posts as I was either thinking them up or actually typing them. There's enough snark out there. I don't think my particular entries in the world's great reservoir of snark are going to be missed.

I've had these thoughts working about my head for a while now, and they started crystalizing some months ago when the wonderful Jenna Woginrich wrote on her blog, Cold Antler Farm, in the other quote that's been on my mind:

There are people who live their life as a series of opportunities. They hear new things, new ideas, and they find a way to support and encourage the things they see as good and valuable. If they find something negative or a waste of energy they avoid it and forget about it. Other people choose to live in fear, or on the defensive side of those who they disagree with. They put less energy into encouraging the things they support and more energy into tearing down the things that threaten them. I choose to be the positive type of person. It's why you will never see me write something negative about another person on this blog. I might rail against factory farms or an industry, but you won't see me tear apart a person. I think the only reason I have been successful at this farm (a measured success but I'm still here) is because I do not let negative ideas or people into my life. It's a protection of my spirit and a recipe for happiness. And anyone, at anytime, can decide to be a more positive and encouraging person. Every minute is another chance to turn it all around.

Spend your time with people who fly kites, either metaphorically or literally. You're better off.

I couldn't agree more, which is why, even though I like to think I'm generally positive to begin with, I'm drawing a line in the sand anyway. People who write snark? The Internet's got them by the boatload. People who write science fiction novels, blog at length about the merits of the Star Wars Prequels, wax poetic about bib overalls, get hit in the face with pies, and post photos of food and cats? I'm the only one of those. Well, maybe not the photos of food and cats. But the other stuff is all me! And this is the year I focus on the life I want. Snark doesn't make that possible, so goodbye, snark, and let the cream pies fly! (Actually, don't let them fly, if your aim stinks. Stick to shoving them.) 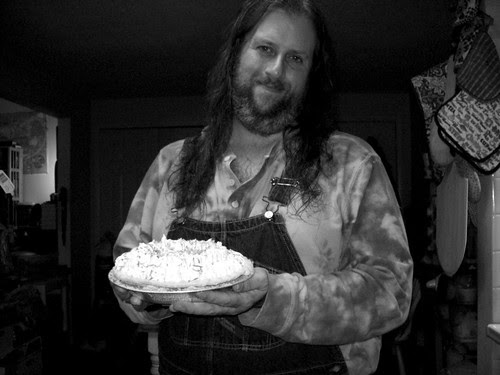 And of course, to all the readers and fellow travelers in these various digital and analog journeys, I say.... 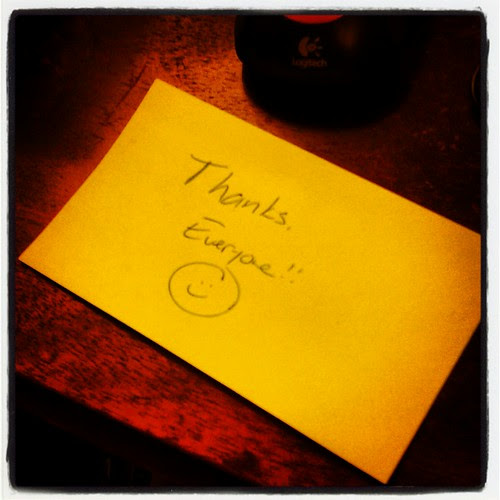 11 years at an unflagging pace. You, my friend, are a blog-star! Congratulations!

Wonderful bit of writing and a fine idea!

:-) I celebrate your turn from snark! Not your own - I think you have very little snark - but the snark of others.

People can be funny without snark. I've never read "Zen of Motorcycle Repair," but if you want a genuinely funny book from a Buddhist worldview, try "Who Ordered This Truckload of Dung?" It's by a Thai forest monk.

I agree about snark. Truly clever snark is at such a premium; most of it is just whiny bitchiness (except for your, of course.)

Congrats on 11 years. You warrant a passing mention in my blog today...

So much of the snark I see today seems to be, as you said, from a defensive posture. Or it sounds to me like someone who essentially can't or won't be happy about anything lashing out at the world. It feels like the refuge of the spoiled brat, the person who is dissatisfied with the way their life turned out. Or it's like the people who want to be 'cool kids,' but for whatever reason, aren't, who decide they'd rather rain on everyone else's parade than just embrace their nerdiness or geekiness or whatever and just enjoy whatever it is they enjoy.

I find that snark gets really, really tiring after a while.

Congratulations on 11 years! And thank you for the excellent post; I couldn't agree more about all of the snark on the internet, which has made so much of the place so dang tiring. I've been pulling back slowly for years--no longer doing my Throwdown, for example, though it did generate a large amount of traffic--because it's just so exhausting to be so unrelentingly negative about things that ultimately make no damn difference. Your thoughts articulated what I've had a hard time saying.