::  Jason Bennion posted this pic on Facebook. It's the TV Guide cover from when Battlestar Galactica was set to premier, back in fall of 1978. Pretty cool stuff, although...well, I'll give the geeks out there in the audience a chance to notice it. 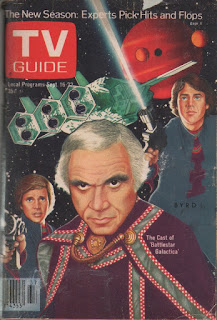 Yup, look at that for a little bit. A hint: one of the details is really wrong.

The ship on the cover: that's not the Galactica. That's the back end of Discovery from 2001: A Space Odyssey. Oops!

What likely happened is that this issue had to go to press before ABC was willing to release certain details, like what the titular starship of the show looked like. (And also, judging by Richard Hatch's and Dirk Benedict's heads being placed atop weird gray blobs, certain details of costume design as well.) Understandable, but pretty amusing nonetheless! That'd be a funny mashup, anyway -- just as the Cylons attack, they'd have to contend with Hal refusing to open the pod bay door....

::  A couple of folks go Scuba diving in Hawaii. Just a normal dive, down to the bottom...when one of the guys looks up, and Whoa! Admiral, there be whales here!

I tend to think that diving would be a bit too scary for me, but wow, what a moment that would be.

scrawled here by Kelly Sedinger at 8:54 AM