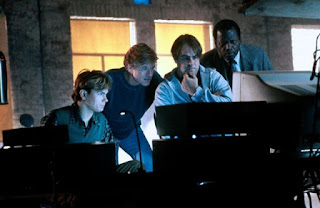 COSMO: You could have shared this with me.

COSMO: You could have had the power.

MARTIN: I don't want it.

COSMO: Don't you know the places we can go with this?

MARTIN: Yeah, I do. There's nobody there.

COSMO: Exactly! The world isn't run by weapons anymore, or energy or money. It's run by ones and zeroes, little bits of data. It's all just electrons!

COSMO: There's a war out there, old friend, a world war. And it's not about who's got the most bullets. It's about who controls the information: what we see and hear, how we work, what we think. It's all about the information!

MARTIN: If I were you, I'd destroy that thing.


I saw Sneakers when it first came out, back in 1992 or thereabouts. It quickly became one of my favorite movies, and I saw it several more times theatrically before it became a fixture in my rotation of movies to rent on occasion, and later, when I had a sizeable collection of movies on VHS. But for one reason or another – mainly because I just never got around to it – Sneakers never got into my DVD collection, so I haven't seen it in...holy crap. More than ten years. That seems rather wrong to me now, in retrospect, but never fear – I finally watched it recently, with some fear and trepidation that, like many a techno-thriller made more than a decade ago, it wouldn't hold up very well.

Surprisingly – and satisfyingly – it does hold up, very well. And more than that: it's striking to me now, twenty years later, just how eerily prescient this movie was.

Sneakers is one of the most entertaining cyberthriller-espionage movies I've ever seen. Robert Redford stars as Martin Bishop, the head of a security firm consisting of a group of men whose backgrounds mostly include shady dealings or outright brushes with the law. Their main job is simply to break into places that are supposedly highly secure, in order to demonstrate the lax areas in the security. They seem to be mostly just eking by: when they complete a job for a bank early in the film, a bank officer fills out the payment check, looks at it, and comments that it's not a very good living. The team gets hired for another job, this time by two men claiming to be NSA agents, who happen to know who Martin Bishop really is (for which he could go to jail). They are to steal a device that decrypts codes which are supposedly unbreakable, which they do, and then give to the NSA guys – only to learn that they're not NSA guys at all, and that they've murdered the mathematician who invented the device.

In a deeply eerie scene, Bishop's hacker buddies start probing around with the little black box, just to see what it can do – and they discover that it can allow anyone to hack into extremely sensitive computer systems. The power grid of the entire Northeast...the Federal Reserve...air traffic control. They couldn't have known it, writing this movie ten years before 9-11, but hearing one of the hackers jokingly say, "Anybody want to crash a few passenger jets?" is deeply chilling.

The entire movie is about security in an increasingly digital world, and at the end of the film, the exchange quoted above takes place, between Bishop and his onetime college buddy Cosmo, who has become a villain since doing time in prison for a crime that he committed with Martin at his side (but who eluded capture by the police simply by going out for pizza when they showed up with the guns). The idea of the world become increasingly governed by, and even defined by, the processing of data was a pretty bold one back in 1992. When I saw this movie, I had not yet even heard of the Internet, and the digital infrastructure that Sneakers portrays – with dial-up modems and not a cell phone in sight – seems utterly quaint. And yet, the movie is somehow fresh, despite all that, largely owing to the charm of the cast, the sparkling dialogue, the engaging direction, the brisk pacing, and – in terms of the technology – the nicely non-specific way the technology is depicted.

There are a lot of very clever touches in Sneakers: the reverse 'race against time', for example, in which Martin Bishop has to get a job done and yet literally can only do it at a very slow pace, lest the motion detectors notice his presence. Also the way they enlist Martin's former (and yet still friendly) girlfriend to help with the problem of recording a particular scientist's voice for use against the voice-print ID gizmo. (If the phrase "My name is Werner Brandes. My voice is my passport. Verify me." is in your geek lexicon, then you are my kind of people.) I also like how vague the movie is about Cosmo's villainy. We never learn who he works for, or if he is the main ringleader; we never learn what exactly it is that he wants to accomplish with the little black codebreaking box. In fact, it's entirely possible that Cosmo doesn't even have a specific plan in mind at all, and that he just wants the codebreaker because it will give him power that he as yet doesn't really know how he intends to use it. He's almost purely a theoretical villain, which is what makes him even scarier -- as well as the sheer optimism of his villainy, which is what makes the quote above so memorable. It's not about making threats or committing crimes or any of that dirty stuff. It's about the possibilities inherent in controlling the world's data.

And that is really makes this twenty-year-old film stay relevant.
scrawled here by Kelly Sedinger at 12:30 AM

Always wanted to see this movie. Ernie Tetrault, then a local news anchor from around here, plays, I believe, a news anchor.

I was a movie theater projectionist when this one came out. I'd been in the job long enough that much of the novelty of watching movies for free had worn off, and I preferred to spend my downtime between start-ups reading. But this one captured my attention, and I found myself standing at the booth porthole window with the monitor speaker turned up, watching and listening, every chance I got. I think this is an underrated classic, honestly, for all the reasons you mention, but especially for the wonderful chemistry of the cast. It was the last really good movie Redford made, IMO, and of course one of the final movies of the late River Phoenix, whose death hit me hard.