Sunday Burst of Weird and Awesome!!!

:: Dungeons and Dragons was created almost 40 years ago by Gary Gygax and David Arneson. Both men have passed on, but Arneson's personal collection of materials comprising his creative work on the game was recently found in, of all places, an abandoned storage locker. Now it's all going to be auctioned. Wow! I'm glad that the new owner of the locker wasn't a putz like that guy on Storage Wars who is always searching for 'collectibles', and just tosses stuff aside if he has no idea what it is.

:: How in God's name have I gone this long without learning about Blue Milk Special? This is a webcomic that is retelling the Original Trilogy of Star Wars, as a parody. And it is awesome. I spent some time this morning reading it, getting up to the Millennium Falcon blasting its way out of Mos Eisley. I think that this one is my favorite thus far...but it's got some competition.

:: Some recent stuff pertaining to that goofball fascination of mine, the pie in the face: 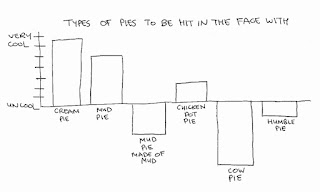 I saw this on Tumblr. I guess I'd agree on the first two, but I'm befuddled that a chicken pot pie has a 'positive' rating as a potential pie for someone's face. I don't think I'd like that at all. Especially if it's still fairly fresh from the oven.

A reader e-mailed me this helpful bit of advice:

See? Pot pie is not recommended. (I wouldn't recommend shaving cream either, because it tastes like, well, shaving cream. And meringue doesn't stick, at all.) As for the delivery techniques, I have zero experience in this regard myself, but I recall from gym classes in school that throwing things isn't my wheelhouse, as it were. Best stick with the push, I suppose.

Comics readers from the 1970s (on which I was a young one) may recall a DC Comics superheroine named The Mighty Isis, whose powers and mythology was derived from Ancient Egyptian mythology. (Hmmm...I wonder if her creation was inspired by things like the tour of King Tut's treasures around the US....) She had a teevee show that was paired with the Shazam! show, along with her short-lived comic. In one of the issues of the comic, one of Isis's fellow Egyptian gods, Set, shows up to try to force humans to worship him, and he works all manner of mischief, which Isis can't stop because she's not as powerful as he is. So she hatches a plan to show Set that he doesn't really want to rule humans anyway, because they're not sufficiently reverent of the gods. How does Isis demonstrate this? By letting some kid (from her schoolteacher alter-ego's class) throw a pie in her face. 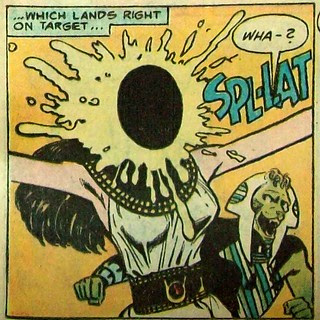 It's a weird story (I posted the whole thing on my Tumblr), but kind of funny and even 'wholesome' in that "Hey, I can triumph over my foes without resorting to violence!' way. And as comic-book pies in the face go, this one's fairly nicely drawn. (Not that I have a huge sample size of such things to meditate upon...I remembered this one from when I was a kid, and I spotted the issue in an 'Old Comics for Ten Cents Each' box at a local comics store, and the cover jogged my memory.)

::  Finally, I note the passing last week of Adam Yauch, one of the founding members of the Beastie Boys. In truth, I wasn't a fan, but that's more because I just don't grok rap in general. Not my cup of tea, although I do grant the artistry involved. The Beastie Boys' popularity and influence can't be ignored, but for me, their best thing was their famous video that included a pretty spiffy pie fight.

OK, that's it. More Weirdness and Awesome next week!

Email ThisBlogThis!Share to TwitterShare to FacebookShare to Pinterest
Labels: Burst of Weirdness, Comics, Passages, Pie in the Face

I know! That would just be gross.