This was the song The Wife and I chose for our first dance at our wedding reception, fifteen years ago today.

The weather that day was crappy -- cold, rainy, and windy; days before, the Buffalo News had run a story indicating that the average temperatures to that point that May were on par with an average November's. Oh, and I was hung over. Yeah, I hate to admit it, but I had indulged too much wine the night before. Oh well. There were parts of the ceremony where I really was thinking, "Wow, I wish I had a water bottle up here right now."

We had our reception at a tiny Community Hall way up in the hills above Allegany, NY, in a community referred to by the locals as "Chipmunk", even though that's not any kind of official designation. Don't look for Chipmunk on any map; you won't find it. It's a very rural road, with a cluster of houses and its own community center. But that was part of its charm. The food was catered by the people who ran our favorite local restaurant down there; they still run that restaurant, actually, but as we don't live in that town anymore, we haven't been there in many moons.

It turned out that our church organist, who would eventually play for our wedding, was a guy who came into the Pizza Hut where I worked at the time regularly with his family. It's always weird when someone you know from one aspect of your life enters another aspect of it. Our pastor was the father of two guys I went to high school with and had known eight years prior. Again, funny how life circles back on itself.

For dinner, we had chicken. Which is fine. I like chicken. Having to stop every third bite to kiss the new Wife after some putz started the 'tapping the wineglass with their fork' thing got a bit old, I must admit. I don't recall much else from the meal. The cake was good; we got it from a local supermarket. I like when local supermarkets do wedding cakes. No, we didn't do that annoying cake-smashing thing. It may be surprising to hear that from a committed fan of the pie in the face, but I've never liked the wedding cake smashing thing. (We were married seven years before I'd finally get my first pie from her. Why so long? That's a long story....)

The thing that made The Wife happiest, I think, was the cans and stuff tied to the back of my car. She loved the sound of that stuff rattling behind us, and I think she was disappointed when it all broke off fairly quickly. We spent our first night together at a local bed-and-breakfast...or maybe it was a hotel of some sort. Called the Century Manor, it's a restaurant with a few rooms upstairs, in a very old building. When we went to take our respective showers, we had trouble figuring out the plumbing. There were pipes with handles going everywhere in that shower. By some trial and error I got water flowing. I have no idea how.

My new sister-in-law caught the bouquet, and my uncle Jerry caught the garter. After I had to throw it twice, because the first time, all the guys just stood there, hands in pockets, letting it fall to the ground. Heckuva job, guys.

There was no 'family drama' at my wedding...none whatsoever. There is some dysfunction in our extended clan (or rather, there was; most of those parties have now gone into the good night), but none of them attended, and thus our wedding was just what a wedding should be: a party out in the boonies with a bunch of smiling people, good food and beer inside, a bonfire outside, a DJ who did a pretty good job on the music, and two young people starting their lives together.

What has come since has been up and down; longtime readers and friends know that. We've been tested in ways that nobody should be tested, and yet, some people are. Did we pass the test? I'm not sure what 'passing' even means, in this metaphor, but I have this: we're still together and I see zero chance of that changing. We both have regrets...but then, who doesn't?

I wouldn't trade a minute of these fifteen years for...well, that's not entirely true. There are a few minutes we've had that I wouldn't object to trading away for something better. But if I had to face those moments...I'm glad I faced them with her. Because I'm not sure I would have got through them otherwise. And the good moments? Well, those ones are pretty sweet. 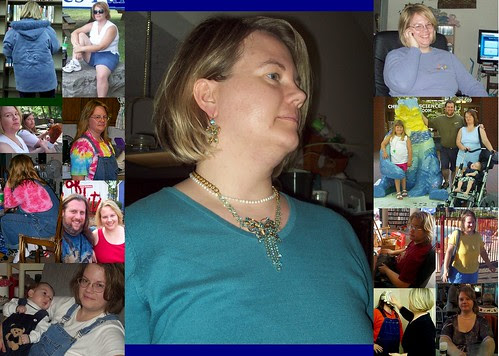 Oh, and the day after our wedding? Mid-sixties and sunny. Bite me, weather gods!

scrawled here by Kelly Sedinger at 3:00 AM

Happy Anniversary, you two. I know that life hasn't been kind to you since you found each other, but you have a lot of love and guts between you and, I perceive, a lot of mutual respect, nurturing, and affirmation. You deserve the best that married life can give; may the gift of love continue to pour in for many, many years to come.