So they want to tear down this building: 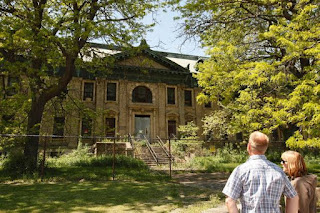 That's the old Bethlehem Steel headquarters building in Buffalo. It's quite an attractive structure. The problem is that it's been unoccupied for more than thirty years. And what's more, it's not exactly in a great location. 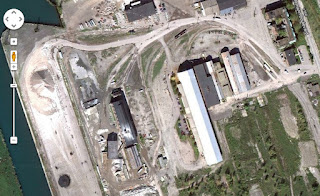 That's the building,  way up in the upper right hand corner. Note that it's not surrounded by a larger business district or neighborhood; no, this building basically sits on an enormous brownfield that takes up a huge portion of the Buffalo and Lackawanna waterfronts. Bethlehem Steel closed up shop here more than three decades ago, and this building has been empty, unused, and unmaintained in all that time. Now, the city of Lackwanna wants to demolish it.

Here in Buffalo-Niagara, we have a large and vocal contingent of people who are awfully well-meaning, but their main goal seems to be to mobilize anew each time some old building is 'threatened'. The refrain always comes: Save the building, it's a part of our heritage, re-use it, et cetera. The odd thing is that this 'mobilize for the newly threatened building' approach seems to be the main way of operating; you don't hear much about pursuing public policies that might make preservation preferable to demolition.

The main problem is that all this preserving ends up contributing to the already uphill battle this region tends to face every time it courts a new business or entertains the growth of an old one, and for me, it's come to the point where the mobilization of the preservationists just makes me wince every single time. The last few years, my family and I have taken brief trips to other cities in the spring, and it's always eye-popping to me to see the degree to which other cities are rebuilding and reenergizing and reinventing, even in this economy. But not us. Not Buffalo. Here, we treat every building as though it's the very place in which George Washington took the oath of office while baptizing Abraham Lincoln and punching Adolf Hitler in the jaw. So much of the 'historical significance' seems to often boil down to 'A successful business stood here for a long time before it either died or went away and nobody since then has had enough money to do something with this building so here it sits, beloved for simply existing.'

Here's a good example of the foolishness that the preservation instinct around here can lead to. This is the Blue Cross/Blue Shield building in downtown Buffalo. It was erected just a few years ago. 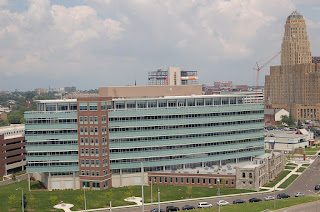 See that odd-looking stone facade at the front of the building? For many years, this entire lot was completely vacant, except for that facade. That was it. Just the facade, no building behind it: a stone facade and a big empty lot, right at downtown's front door. So when local health insurance company Blue Cross-Blue Shield bought the lot and built their building there, they for some unfathomable reason incorporated that facade into their building in a way that doesn't 'incorporate' at all -- it just basically duct-tapes the facade to the building. Every time I drive by there, I think, "That is one of the dumbest looking buildings anywhere."

Are there great old buildings worth keeping in Buffalo? Sure...but I'm sick of the way we go about it. Just as I'm generally sick of the way Buffalo goes about everything. While other cities rebuild and grow and keep a little bit of heritage while they move into the century we're living in, Buffalo remains the cruddy hovel in a Monty Python sketch.

Which brings me to this. It's to be sung to the tune of...well, any Monty Python fan ought to be able to figure it out.

We’ve got tons of old buildings in Buffalo,
Brick buildings, stone buildings and more;
And almost all of those buildings were
built back in days of yore!

Yup, we got lots of old places,
they’ve been empty since before you were born,
but we still think that they’re pretty awesome,
like empty towers once full of corn!

It might bug you that they are crumbling,
and you might want to build something new,
but don’t even think about demo,
‘cause if you try it we’ll sue!

Every brick is sacred,
Every building’s grand;
We’ll fight to keep them standing,
‘Til they turn to sand!

We love old Greek ruins,
crumbling on fields brown;
And we want that look for
our aging, rusting town!

Shuttered buildings thrill us,
new ones make us mad!
Though they're forever empty,
the old ones make us glad!

So stop the demolitions;
our plan, we must endorse!
Though soon, no one will live here,
And things will take their course.

Every building’s sacred,
and hist’ry makes them great;
And if you try to wreck one,
we’ll all be quite irate!

Email ThisBlogThis!Share to TwitterShare to FacebookShare to Pinterest
Labels: Buffalo, Events of the Day

I just have to ask, where were the preservationists over the past 30 years that the building sat unused and falling apart?

That is ALWAYS my question.

I'm not sure how you think preserving stuff is an impediment to development. In this particular instance the impediment is, as you point out, that the building is in the middle of a brownfield. Most of the time the primary preservation issue in this area is that the structure involved is situated in an awkward to develop location. In some ways this is good thing-- it means that what we have had to now has been "preservation by neglect". If you have ever visited Memphis (and if you haven't you should) you will known that the reason Sun Studio-- the birthplace of rock and roll-- still exists is that the neighborhood was never targeted for redevelopment. That scene in Walk the Line when Johnny Cash walks into Sun? It looked like that then, and it looks like that today, and it is amazing to go there. The Central Terminal in Buffalo stands today because there was no reason to do anything with it. The Larkin Building is gone because -- well, actually, there was no reason to tear it down either, but they did.

Buffalo was an economic capitol a hundred years ago, and as a result there are a lot of building here that are distinctive and important. Can they all be saved? Of course not, nor should they all be. This particular example isn't one I've been to visit, but Just knocking it down impresses me as wasteful. If it is preventing someone from doing something useful, well, knock it down I suppose. But maybe first consider if something useful-- which includes attractive to my way of thinking-- can be done with it.

Too much of the city looks like a smile that's missing a tooth, because things that were once there were torn down without considering what could be done with them.

I second what Steph said. But I can sort of understand it too. People don't appreciate things until they're gone or about to be gone. Also, it might help if modern buildings weren't so damned ugly.

Well, there's also the approach we take here in the Salt Lake City area, which is to automatically knock down anything older than about 15 years, because there's a developer somewhere who needs a new Escalade. Everything here is New and Shiny(tm)!

Bill: I'm not sure why you believe that I think that preservation is an impediment to development. Preservation and development can go hand-in-hand, but this piecemeal, 'Preserve every building and act as if each individual building is essentially sacred' approach does not strike me as the way to go about it. Is it 'wasteful' to demolish the building? Only if it's of more use to keep it standing, and there's been no demonstration that it is, and what's more, the thirty years of vacancy clearly demonstrates otherwise. I'd frankly be willing to bet that a good many of the people now patting themselves triumphantly on the back for their protests having stayed the execution of another empty building are folks who, before they heard about this, didn't even know where the thing was. That's what irks me: the idea that old equals essential, and that simply because an old thing still exists is in itself a reason to keep it there.

My problem is that there is no public policy in place here to ensure that preservation and economic development can take place together, and that there is no effort by the preservation crowd to create or advocate for such policy. It's literally a one-building-at-a-time thing, and I tend to agree with Alan Bedenko in that there are impulses at work here that aren't entirely about preservation per se.

The dental metaphor you strike seems to me particularly apt, but not in the way you suggest. Dentists don't, as a rule, leave rotting teeth in place because hey, they're the original teeth.

The building in which I work was the country poor farm built in 1911 but which ws abandoned for years and years. Then my employers bought it and made it a hotel with nine onsite bars, a winery, a brewery, a distillery, organically grown gardens, spa and concert venue. And the artwork commemorates all the people who came before us.

So, with a little (a lot of) cash and some imagination, good stuff can come from saving the historic buildings.