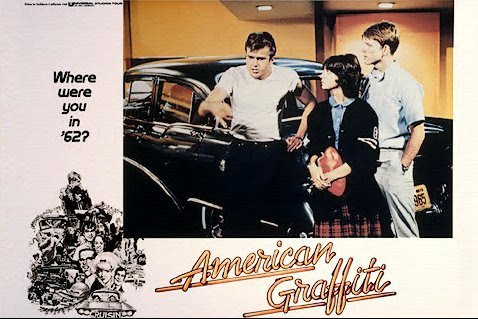 American Graffiti is a stalwart in the coming-of-age genre, setting a format that would serve the genre well for many years to come. We meet a small group of young people and follow them for a short period of time that nevertheless changes who they are, forever. Some of them go on to bigger things, some don't.

The film follows several teenagers on a single night in Modesto, CA, in the early 1960s, before Viet Nam, before...well, before everything. They still believe that their futures are bright and shining and ahead of them. For some of them, those futures are.

Anyhow, Paul Le Mat plays John Milner, the drag-race king of Modesto. Le Mat plays him with a certain weariness in the face of it all; Milner seems to know that he can't do this forever, and that sooner or later it's all going to come to an end...and not in that great a way, either. In the film he ends up in the company of a thirteen-year-old girl, Carol (played by Mackenzie Phillips), and although he's irritated that he's got this little kid with him, in the course of talking they come to understandings of sorts.

There's a scene where they go to an auto junkyard:

MILNER: Over there, that's Freddy Benson's Vette... he got his head on with some drunk. Boom! Didn't have a chance. 'S a good driver, too. Ah, that's pretty grim when a guy gets it and it's not even his own fault.

CAROL: Needs a paint job, that's for sure.

MILNER: See that over there, that '41? That used to be, believe it or not, the fastest car in the valley. I never got a chance to race Earl, though. He got his, 1955, in about the hairiest crash we ever had here. Jesus, you shoulda seen it. Eight kids killed, and both drivers. Board of Education was real impressed, see, so they come up, and film the whole thing, and now they show it in Driver's Education class. You'll probably see it, if you get lucky. [beat] 'Course, it's pretty tough when they take somebody with 'em.

CAROL: You've never had an accident, though. You told me.

MILNER: Yeah, well, I come mighty close. Almost rolled it a coupla times. But, I've been just quick enough to stay out of this graveyard.

CAROL: Bet you're the fastest.

MILNER: Never been beat. Lotta guys tried. 'Course to me, there's more guys lately than there's ever been.


American Graffiti would kick off a nostalgia craze for, I suppose, a more innocent time, before all the wars and assassinations and riots and unrest. Teevee shows like Happy Days and Laverne and Shirley were direct descendents of American Graffiti, which is a film I love. It's not just the 'coming of age' genre that appeals to me, but just a story that's nothing more than a camera dropping in on someone's life, staying there for a while, and then leaving, while the life that was already going on before the camera got there keeps right on going on after the camera leaves.

The themes are pretty universal, though: a legend realizing that the glory can't last forever; a kid who is out of his depth with a girl; another who is terrified of change...and who discovers that his hero, the outlaw of the airwaves, is just some guy in a little broadcast booth in some crappy little radio station, munching on popsicles as he works his own bit of magic.

The whole film is on YouTube. Just don't watch the ill-advised sequel, More American Graffiti.
scrawled here by Kelly Sedinger at 12:30 AM

GREAT film, and made stars of a lot of folks.

One of my all-time favorite movies, and Milner is my favorite character.

I'm a well-known sucker for coming-of-age flicks, and also I love classic cars and oldies music and all the other elements that give this movie identity, but more than that... it's just a damn fine movie. It's nostalgic without being sappy, sobering without succumbing to the despair that plagued a lot of movies of this vintage (the early '70s were a grim time at the cinema). Basically, it feels like we're watching real human lives who also fill certain archetypal teenage roles.

Anyone who says that George Lucas can't (or never could) direct needs to watch this one.