I decided, kinda-sorta on a whim, to make some pulled pork the other day.

Now, in the past when I've had the taste for pulled pork, I've bought it already-made at The Store, either our own make of it or a brand like Lloyd's, which comes in a tub and just needs to be heated up. But while I used to love Lloyd's products, over time I've come to find them too saucy and too sweet, and I've further learned that pulled pork is basically a very cheap hunk of meat, cooked until it shreds, and then simmered a bit in sauce. More or less.

So I bought two items the other day. I bought a small roasting pan, with rack; this is to supplement our larger roasting pan, which is big enough to roast a nice-sized turkey, but is a bit cumbersome when one wants to roast a six-to-eight pound cut of meat or a chicken or a game hen or...you get the picture.

The other item I bought was, obviously, the meat. I bought an eight-pound shoulder butt pork roast, which I laid out on the rack of my new roasting pan and seasoned on both sides with a rub: 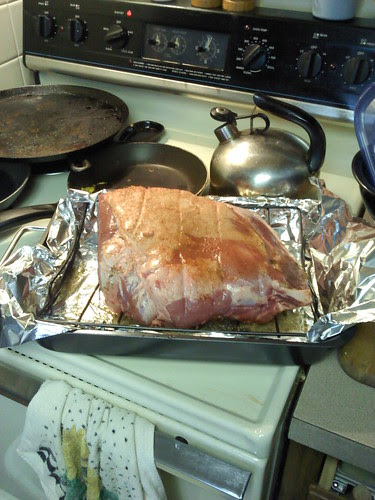 Then I covered the roast with foil and put it into the oven at 375 degrees, where it remained for the next four hours. It was about an hour into this process that I discovered a flaw in the Homemade Pulled Pork Plan: even though the cooking time is six hours, your home smells like wonderful pulled pork after just one. Talk about hunger being the best sauce, and smells stoking the hunger....

After four hours, I removed the foil and popped the roast right back into the oven, for another ninety minutes or so. At this point I was checking the roast's temperature every twenty minutes or so, aiming for about 175 degrees; when I finally reached that point, I took the roast out of the oven and let it "rest" on top of the stove for ten or fifteen minutes. (Believe me, folks, allowing cooked meat to "rest" before doing anything else is so essential to good cooking that, well, it's almost a deal-breaker; cutting meat just after removing from the heat will pretty much destroy any effect you have from your careful preparation. Trust me on this.) 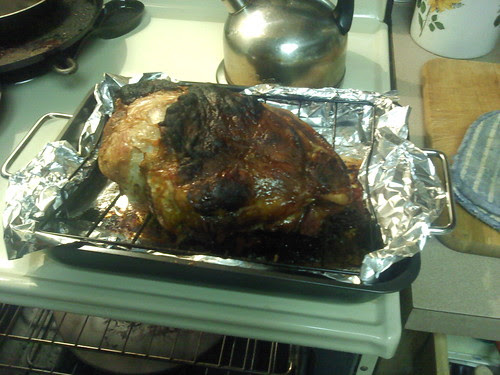 Then it was time to shred and simmer a bit in sauce. I grabbed a couple of forks and shredded away, dropping the hunks of meat into my trusty crockpot. This took a lot longer than I had originally thought it would; even as tender as the meat was after that long in the oven, it still takes a while to physically shred eight pounds of the stuff by hand. Once I had it all shredded (except for a couple of large hunks of fat, which I removed), I poured in most of a bottle of barbecue sauce (a "Kansas City" style recipe sauce, although not the stuff that my good friend Mark likes to recommend because he knows the people who make it, but next time, that's what I'm using because trust me folks, it's good sauce), and then ran the crockpot on high for about half an hour, just to bring everything to a nice piping-hot temperature. 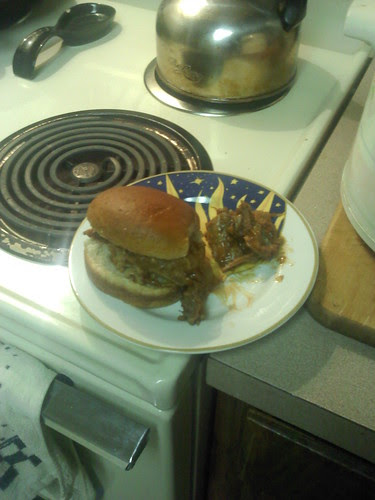 Of course, being that our household is just the three of us, this process yielded an enormous amount of pulled pork for us. We each ate two sandwiches that night; The Wife and The Daughter had some more for lunch the next day; I had it for lunch yesterday and will have more today; and yet, as of this writing, there is still a huge container of it in our fridge. So far we've got seven meals' worth of meat out of that roast, and we're not close to done yet. Total cost will be under a buck a meal for each serving we end up getting out of it. That rocks.

My process here wasn't any kind of "official" method for making pulled pork, but I put it together from reading some recipes online and looking at the shredded pork recipe in Emeril Lagasse's cookbook devoted to pot-luck dishes. It's as easy a cooking process as I've encountered. If you've never made your own pulled pork, give it a shot. It's easy!
scrawled here by Kelly Sedinger at 3:51 AM

I'm sure it's delicious, but MY GOODNESS, that seems labor-intensive.
But you're absolutely correct about having food out of the oven resting.

It really isn't, though. The time is long, obviously, but preparation time is less than five minutes (open roast, season, stick in roaster, cover with foil). Really, the amount of time that you spend doing things to the roast is very short. The most labor-intensive part is the actual shredding at the end, really; everything else is really easy and quick. (Except for the six hours in the oven, but that's the oven doing the work, not me.)

It's way easier if you simply marry a chef. You would have found, as I did, that the pulled pork preparation becomes much, much easier.

I've got an even easier way. Throw the roast into the Crockpot with a can or a bottle of root beer. Let it cook on low for 6 hours, then drain it and shred it. Put it back in the pot with a bottle of barbecue sauce and cook it for about another hour. It's so good! The shredding is still the hardest, most time-intensive element.