Of goats and the men who gaze intently in their direction 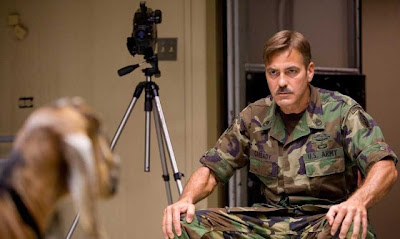 Thanksgiving Day is a really nice day to go to a movie. We've seen both Casino Royale and Quantum of Solace on T-giving in the last few years; this year, The Wife really wanted to see a movie, but there wasn't anything playing that I was really jazzed about. (Couldn't James Cameron have finished Avatar a few weeks earlier?) So, we settled on The Men Who Stare At Goats. It wasn't a great movie, by any means; in fact, it was a little frustrating, because it's fairly easy to see how they could have really elevated this material. But it's a slick, well-made, well-acted, and pretty funny little film. We enjoyed it.

I don't want to spoil too much about the story, but it interweaves flashbacks with "present day" stuff about a secret unit in the Army whose soldiers are trained in paranormal activities, like remote viewing, trying to pass through walls, and killing things simply by staring at them really intensely. (One of the test victims is a goat; hence the title.) Ewan McGregor is a reporter who gets turned on to this Army unit by a veteran; he files it away for future reference until he ends up in Kuwait in those hazy days post-Iraq War (or rather, during the War but post-"Mission Accomplished"), when he falls in with George Clooney, who is an actual member of the unit and who is on a mission to...well, that's never really made clear, and frankly, it's not that important anyway.

As McGregor journeys with Clooney across the Iraqi desert, Clooney fills him in on the history of the shadowy unit he serves. They call themselves "Jedi Knights", which is an in-joke that goes all the way through the movie and really wears out its welcome. In all honesty, I have no idea why the writers decided to call them "Jedi", because aside from that, there is no reference to Star Wars in the film, so the "Jedi" thing ends up being an odd kind of shorthand joke that we only laugh at because it sounds like we're supposed to laugh at it. (It doesn't really help the joke out to have Ewan McGregor say, "What's a Jedi?")

The film flashes by pretty quickly, and ultimately it's a light and fluffy piece of entertainment. I do wish the script had pushed the material farther; there's a lot of gold to be mined from the involvement of various world governments, including our own, in paranormal research and the attempted development of psi-weaponry during the Cold War era. The Men Who Stare at Goats is a perfectly fun little movie that seems to suggest, around its outlines, a much better movie to be made someday from similar material.
scrawled here by Kelly Sedinger at 6:51 AM