Speaking of Albums: "Frank Sinatra Sings For Only the Lonely" 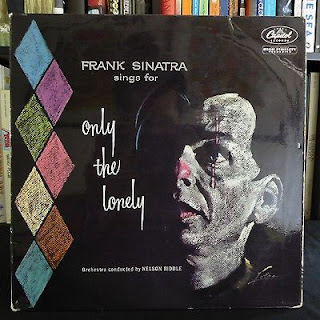 This album is a masterpiece of mood. It starts with that cover. There's no cheerful Frank Sinatra with his crisp suit and his hat just-askew; here we see Sinatra as a sad clown, with the colored checked pattern of a Harlequin figure to the other side.

The album is a collection of torch songs, and what torches they are. This is the music of lonely ex-lovers, walking through foggy streets at night only occasionally illuminated by the light of a blinking streetlight as they pass beneath it. Maybe there's rain, but not a soaking rain, just a constant drizzle that somehow soaks through no matter how many layers you wear.

Frank Sinatra's voice was an amazing instrument, but I believe that his biggest gift was his unfailing instinct to find the emotional center point in any song. So many of the songs he recorded have an aspect of story, a sense of conveying things that actually happened, and when Sinatra was really on, you never had any other feeling than that he was the fellow to whom these things happened. So in Frank Sinatra Sings For Only the Lonely, he's not singing words about loneliness. He is performing songs of loneliness. There's a difference.

Sinatra and his collaborator, Nelson Riddle, who wrote the song arrangements for the album and conducted the orchestra, had both suffered personal losses as they adopted this project, but as always with Sinatra, it barely seems to matter, so completely does he always enter the content of a song.

Hey drink up, all you people!
Order anything you see.
Have fun, you happy people--
The drink and the laugh's on me.

I try to think that love's not around
Still it's uncomfortably near;
My old heart ain't gaining any ground,
Because my angel eyes ain't here.

This album doesn't sound like it should work. It's an entire album of a single mood, an entire album of very little variation in tempo. Sometimes Sinatra keeps his register and mood subdued, but other times he does that wonderful "Frank" thing where he lets his voice climb into his almost operatic sound. Aside from that, though, the general tone of Frank Sinatra Sings for Only the Lonely stays steady throughout: slow songs of lost or unrequited love.

I first discovered this album in the late 1990s, when I "rediscovered" Frank Sinatra. He had been a staple of my house growing up; he's one of the first singers I remember (more on that another time), along with John Denver and Bing Crosby. But you do have to discover things for yourself, don't you? At some point you have to listen anew to the music you already knew for years and realize, all on your own, just how good it is. That's what happened with me and Frank Sinatra. (I try not to feel too guilty about the fact that within months of me buying my first Sinatra album of my own, he died. Ouch.)

I listened to Frank Sinatra Sings for Only the Lonely a number of times when I was driving home from my job in Jamestown, NY. My commute during the year and a half I worked that job was about an hour long. It made for long days, but the commute home gave me ample time to get the day out of my system, and I listened to a lot of good music on that commute. (This is also when I discovered that I am not the least bit good at listening to audio books, but that's a thing for another day.) Some albums worked well any time, but there were some that really lent themselves to the night time drive, when it was just me and my headlights on rural Interstate 86 in New York's Southern Tier. Frank Sinatra Sings for Only the Lonely was one of the best for this...especially when the album's last song rolls around.

"One For My Baby" is really the only song that can end an album like this, isn't it? Is there a song whose mood, whose sense of place, is more perfectly evoked by its tempo, those sad tinkling piano chords that open it, and Sinatra's opening words? I can see the dim light reflected in the backbar mirror, the guy mopping in the corners, the bartender barely listening to this one last gin-filled drunk as he washes those last glasses and eyes the not-quite-adequate couple of bills the guy has been weighing down with his ashtray. Frank Sinatra's gift for musical storytelling was one of the greatest ever, and he almost never put his gift to better use than this song, right here, as he closes his greatest album with the anthem of the drunken loveless whose barkeep has said, "Last call."

It's quarter to three.
There's no one in the place,
'cept you and me.
So, set 'em up, Joe;
I got a little story I think you should know.

We're drinkin, my friend,
to the end of a brief episode.
Make it one for my baby...
and one more for the road.

Email ThisBlogThis!Share to TwitterShare to FacebookShare to Pinterest
Labels: music; Speaking of Albums

Great choice. I don't actually own it, but a friend of mine, just before she knew she was going to die of brain cancer back in the early aughts, gave me a bunch of Sinatra albums to give to another friend. I did, but I had them for a few weeks.