And now, some space art!

I saw this on the NASA Goddard Space Flight Center's Flickr stream. It's a cool illustration of the formation of a planet. All that lightning and whatnot is, I must admit, somewhat inspirational as "sensawunda space opera" pictures go. 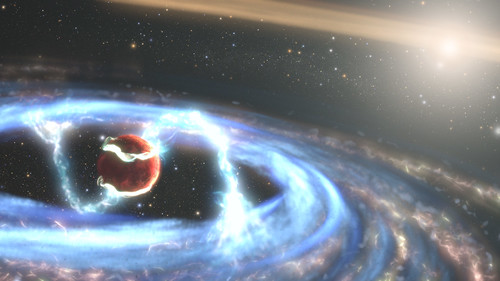 Description from the photo page:

Five million years might sound like a long time, but it’s a young age for a planet!

Hubble studied an exoplanet that’s grown up to five times the mass of Jupiter over a period of about 5 million years.

This illustration of the newly forming exoplanet PDS 70b shows how material may be falling onto the giant world as it builds up mass. By employing Hubble’s ultraviolet light (UV) sensitivity, researchers got a unique look at radiation from extremely hot gas falling onto the planet, allowing them to directly measure the planet’s mass growth rate for the first time.