Of course, the drive for snack food innovation continues with new flavors of various salty snacks showing up pretty regularly! Some of these I try willingly, while others I...don't. (I don't care how many people tell me that Cappuccino Lay's Potato Chips tasted good, when they were around; no way was I trying that shit.)

But here are a couple of recent samplings of mine: 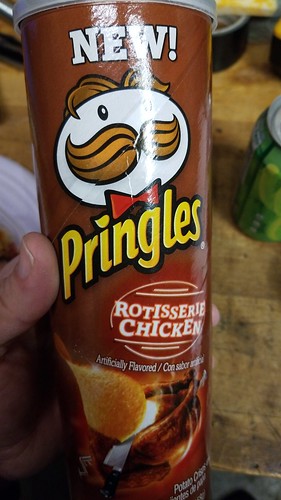 Pringles are nifty because they're not quite a chip, right? They're just different enough, in texture and in that saddle shape, to scratch the "crunchy and salty" itch in a way that regular potato chips don't. And for years, there was only one flavor Pringles, but those quickly diversified. Nowadays there are a number of "standard" flavors that stick around, while other new flavors show up and usually disappear pretty quickly. One of these is out now: Rotisserie Chicken Pringles.

Are they good? Well, yes...in the sense that you can eat them without hating yourself. They do taste vaguely "chickenish", as if the chips were seasoned with the flavoring packet from some chicken-flavored Ramen noodles. I don't get that they're particularly rotisserie chicken flavored, though. They're edible and pleasing enough, but they're certainly not memorable enough to turn to on a regular basis, for me. They're a solid "OK, good enough."

But then there are these: 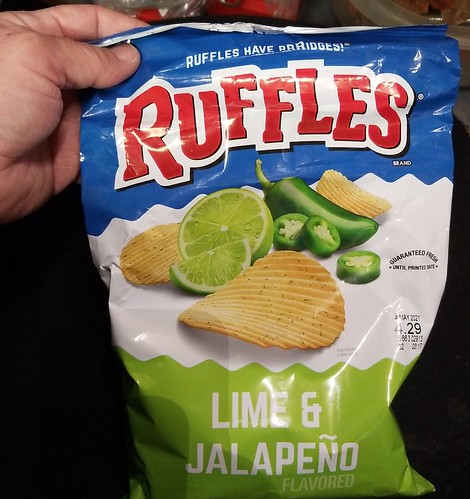 Lime and jalapeno should work, and they probably do work together, but the problem is the medium here. A potato chip by itself brings its own flavor to the party, and in that context, the lime and the jalapeno flavors just don't go well with fried potato. As a result the chips taste constantly...off, as if the mouth can't quite figure out what's going on in the flavor department. Ruffles has a lot of terrific flavors out (try the Queso flavor! Those rock!), but this is a misfire.

However, it's not all bad in the lime department: 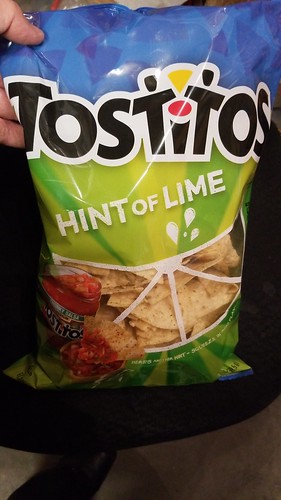 Now, I suspect the lime-and-jalapeno combo would work in a tortilla chip, a corn chip, because there's not as much strong flavor to work against the two "guest" flavors. There's no jalapeno here, just lime, and like the package says, it's not a strong dose of lime. The "Hint of Lime" is pretty accurate, so you get the crackle of the corn tortilla chip followed by the lime flavor that lives somewhere south of the salt, with the effect...well, let's just say that when I get back to making margaritas, I'll be enjoying them with these chips. These are terrific! My only complaint is that they are just a bit too salty. I'll bet that lime flavor adds a nice accent to whatever salsa or picante sauce one uses as a dip. (I had them dry with my sandwich at lunch.)

So, what salty snacks are on your menu these days?

I'm just not a dipper flavor guy, except that I opt for less salt Wheat Thins, or lower fat Wheat Thins.