How do you measure, measure a year.... (Something for Thursday)

One year, give or take, more or less.

There's a famous song from the Broadway show Rent, called "Seasons of Love". The song talks about the measure of time, specifically, a year:

In daylights, in sunsets
In midnights, in cups of coffee
In inches, in miles, in laughter, in strife
In five hundred twenty-five thousand six hundred minutes
How do you measure, a year in the life?

As I write this (a few days before I'm publishing it), the COVID-19 death toll in the United States, according to the CDC website, is 519,064. We're just under a death a minute from this disease, over the last year.

"How do you measure, measure a year." Indeed.

I'm not sure when I consider the COVID-19 virus to have really "begun", in terms of being a major concern in my personal world. Maybe it was when the World Health Organization declared it a pandemic (March 11, 2020). Maybe it was when Tom Hanks announced that he and his wife, Rita Wilson, had tested positive (March 12, 2020). Maybe it was when the National Basketball Association had to start canceling games because players were testing positive (the same day). I remember watching this segment on John Oliver's Last Week Tonight, which aired on March 1, 2020, a few weeks before everything went haywire. The segment is worth watching again, because it's astonishing how wrong everybody was at the beginning...but even given that proviso, note Larry Kudlow confidently saying, "We've got this thing contained already."

What strikes me most about that video--and this was not only before vaccine development was even at a hopeful stage, but when our best science still hadn't homed in on COVID-19's respiratory nature and was still not really endorsing mask use and was instead focusing on rigorous hand-washing and avoiding face-touching--is what Oliver says at the 18:25 mark:

"At this point, you may be wondering, how scared should you be? And the answer is probably, a bit. A bit. I don't want to be alarmist here, but I don't want to minimize what we might be facing here."

It turned out that we should have been a bit more than a bit scared, but then, we didn't know then what was to come or how Americans would react to it all. Those first weeks, though? Those were...incredible.

It's all a bit hazy right now, but as COVID-19 began to take hold in the US, and as we all realized that Mr. Kudlow's lying aside, we most certainly did not have this contained, and as we all saw in the news stories of massive lockdowns in China and Italy and other places with soaring case and death counts, Americans started to panic. For those of us who work in grocery stores, that panic turned into something pretty epic. The run on cleaning supplies was obvious, as were the runs on a number of food staples. People were suddenly wondering: Are we about to be locked in our homes for weeks on end? Are we going to be forbidden to go outside? Will we not be able to buy food or other supplies?

By the end of those first days, the shelves at The Store looked like...well, I struggle to come up with a metaphor, but we've all seen the pictures from grocery stores in the South when the hurricane that's on its way has been upgraded to Category Four. Our delivery schedules were thrown into serious awry as individual stores were suddenly ordering two, three, four times as much supply as they usually did; this surge got passed on to corporate warehouses and then to suppliers. Some brands disappeared from our shelves and have yet to show back up, even now. Buyers scrambled to get stocked with brands we'd never heard of (and if I may say so, Sugardale pepperoni is really tasty!), and of course there were the buying limits that seemed to go on forever. One can of beans. One jar of peanut butter. One package of toilet paper.

And oh, toilet paper. Somehow that one item became the "poster child" for the pandemic's early run of panic shopping, didn't it? I came in to work on Saturday morning for a sixth day, just to assist our overwhelmed Grocery department, and the first thing I did at 6:45 am was to pull a pallet of toilet paper out onto the sales floor. The entire pallet was emptied by eager customers in minutes. So was the second one. So was the third one.

At that point, no one had any real idea of how to best combat the virus. The best advice was to wash your hands constantly and avoid touching your face. My hands were absolutely raw after all that washing, and that's when hand lotion became an indispensable part of my life. We didn't know yet that the virus was mainly transmitting via respiratory droplets, but that became clear pretty quickly (I remember a horrifying story about a choir someplace in Washington that had a rehearsal that led to nearly all the choir members becoming infected), and then...masks were upon us. 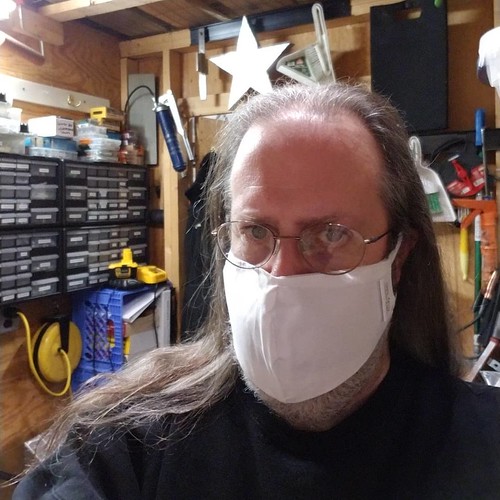 I never liked wearing masks as a kid, not even as part of a Halloween costume, so this took me some time to get used to. It took me a bit of experimenting to realize that the best masks for me were the ones where the straps or cords go around the head and not around the ears, and I bought several masks online from makers who knew what they were doing (i.e., not cheaply-made single-ply thin cotton ones). A year later, I've mostly become accustomed to wearing the mask, though I do consider myself fortunate in that my job affords me ample opportunity to take the mask off when I'm alone in my own work room. But even so, I have to admit to being shocked and dismayed at the reaction to masks by an awful lot of Americans.

I've seen people wearing masks with anti-mask slogans printed right on them, which strikes me as deeply weird. One said "This mask is USELESS!", and naturally, it was, given that its wearer had it below her nose. Another said "Worn by FORCE, not FEAR!!!", which is just goofy. I do not for the life of me understand that macho American attitude toward "fear", as if self-preservation is a non-manly thing to want. I periodically see snark online: Why would you wear your mask when you're DRIVING BY YOURSELF, sheeple! Well, speaking just for myself, I'm making several stops in one trip and I don't want to bother with putting the mask on, taking it off, putting it on, taking it off, each time I stop someplace or come outside. And don't get me started on the people who will, upon exiting a store or office, rip their mask off and take in a giant deep breath as if they've just broken the surface after a deep dive in the sea beyond the limits of their lung capacity.

I've reached a point where much of the time I'm wearing a mask, I don't even think about it and barely notice that I have it on, to the point that I've actually caught myself trying to do things like blow a bit of hair off my phone or take a sip of coffee while masked. I cannot understand the sheer levels of anger something so simple as a face mask has inspired. I am once again confronted by the degree to which a great many of my own fellow citizens hold beliefs with which I cannot even begin to remotely empathize...but this is not that post.

As crises go, it's been very strange for me that this one has been fairly well tailored to suit my particular lifestyle. As an introvert who is quite happy to live a mostly inner life, this pandemic has not been that hard to live with. I miss eating out with The Wife, and the festivals that we love visiting were all canceled last year: no Nickel City Con, no Sterling Renaissance Festival, no Erie County Fair, no Ithaca Apple Harvest Festival. But I still got to go on nature walks with the dogs, and while eating in restaurants hasn't been a thing in a very long time, we've had a lot of wonderful takeout meals. But we don't find ourselves missing out on desperately-needed human contact; we don't find ourselves starved for hugs and we don't find ourselves aching for a return to "normal". I would, in fact, be lying if I did not admit that some small part of me finds a bit of satisfaction in seeing the world's extroverts, so many of whom act like introverts like me are somehow problematic, being forced into my way of living for a little while.

Still, though: it's been a year, and it's been a hard year, a bad year, a terrible year. It's been a year that was always going to be bad, but didn't have to be as bad as it was (and I have a lot more to say about that, whether or not I actually do decide to say any of it). But there were moments along the way, moments of light, moments of goodness, moments that made me think that maybe, just maybe, this entire experience would be a learning experience for enough of us--a critical mass, if you will--that maybe we can still build a future to come in which we put aside the notion that we're all in this alone, that we're all marked for our individual fates and that our purpose here is just to serve as our own tiny cogs in the great machine that we call The Economy.

As the light grows at the end of this tunnel, I hope and pray that we take the lesson with us that nothing had to be this way, and that our world can be better. If a crisis does nothing else, it affords us an opportunity to look deeply at our society and ask serious questions about why we do certain things the way that we do. A "return to normal" would be so incredibly disappointing, wouldn't it? I don't know about you, but I was never in love with my "normal". I dare us to do better.

And I think that those 525,600 people--one for every minute, and counting--dare us to do better too.

Email ThisBlogThis!Share to TwitterShare to FacebookShare to Pinterest
Labels: Daily Life Stuff, Events of the Day, Something For Thursday

Larry K was an idiot before he joined the regime.

Damn, we lost a person per minute. Staggering.