I may not remember the first place I ate a lot of my favorite foods, but I remember a lot of early favorites. Pizza? The ones I remember are Pizza Caboose in Hillsboro, OR and Rocky Rococo's in La Crosse, WI. I have no clue at all when or where I tried my first cheeseburger, but it was probably McDonald's or a chain in the northwest called Burgerville USA. I do, however, recall my first chicken wing (other than as part of a KFC bucket). It was this place: 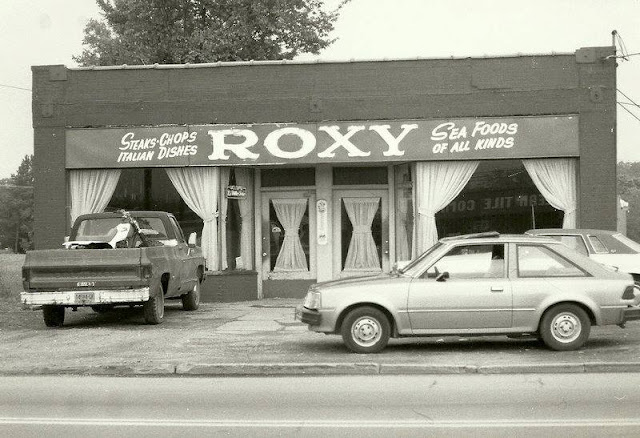 That's The Roxy, an old dive bar in Olean, NY.
The other day I was scrolling through a Facebook group I had found dedicated to old photos and memories of one of my hometowns, Olean, NY. It's fascinating to look at the town's history, even if I haven't lived there in almost twenty years. Olean is a city in New York State's "Southern Tier", although it really isn't much of a city anymore, as decades of population drain have taken their toll. While I grew up as a child in the town of Allegany, a smaller town just west of Olean, I eventually lived and worked in Olean when The Wife and I got married, and Olean was my home from 1997 to the end of 2000.

By the time my family and I moved to the Olean area in 1981, the region's decline had begun, though maybe at that time it wasn't quite obvious yet. Olean still had several factories and lots of shops and even its own shopping mall, though it was on the smallish side. There were three supermarkets and a well-regarded university, and there were a lot of bars. Lots of bars. I remember that a lot of those bars were not "possessively" named, meaning, a bunch weren't named as a person's name in the possessive. There was a place called Sullivan's, and another dive bar called Buzzy's, but mostly the bars in Olean as I recall were "The Something". The Burton. The Village Inn. The Other Place. The Royal Ednor (not to be confused with The Royal). The Edgewood. The Birdcage. And, The Roxy.

As I scrolled through that Facebook group, suddenly I stopped dead because I saw that photo. The Roxy.

When I say that I ate my first chicken wing at The Roxy, it was my first chicken wing in the "split-wing" way, with the wings cut at the joints and the wing tips discarded, so what you end up with are a little drumstick and a "flat" (which is basically the forearm of the wing). I knew none of this wing-prep lore when we were preparing to move from Oregon to Western New York in 1981; all I knew was that my father said cryptic things about how we'd be eating chicken wings soon. My father actually lived in Olean on his own for one full semester in spring 1981, while my mother, sister, and I finished out the school year in Hillsboro, OR. So by the time we came along, my father already knew Olean pretty well, and he'd found this bar where I'd have my first chicken wings.

Now, I don't really know how or why that first wing experience ended up happening at The Roxy. It didn't make a whole lot of sense, really; we lived in Allegany, west of Olean, where The Roxy was on Olean's East side. Now, in 1981, wings weren't quite as ubiquitous as they are now, but still, lots of places had decent wings. Why that bar, all the way on Olean's east side? No idea, then or now. But that place was pretty cool, and in all honesty, I do kind of miss it.

The Roxy had two rooms: a dining room to the right when you went in, and the bar on the left. It was a blue-collar type of joint, which makes sense since it was right across the street from one of the local factories (a tile factory, if I remember right). Sometimes we'd sit in the dining area, other times in the bar, and I think they had other food there--maybe they even had a menu!--but for me, The Roxy was all about the wings.

And yet...I would soon discover, when I tried wings at other places, that what The Roxy served weren't actual "Buffalo" wings at all.

There are a great many ways to prepare chicken wings, but only one way to prepare Buffalo wings: They are fried unbreaded and then tossed in a sauce that is made of hot sauce and melted butter. To serve them, you dump them into a bowl or bucket or basket lined with wax paper. The Roxy's wings were breaded, though, and they came with the sauce on the side, not smothered on the wings themselves. And they were arranged nicely on a plate, like wheel spokes, around the little paper ramekin that had the sauce in it. You dipped the wings in the sauce to taste as you went. I want to say that a regular order of wings had fifteen in it, but I might be misremembering on that point.

When I discovered actual Buffalo wings later that same summer, I actually didn't like them as much as The Roxy's. At some point we stopped going out all that far for wings; maybe the place changed ownership or even closed. The bartender was a crusty old woman with a three-packs-a-day voice who had a wicked sense of humor, as I recall. Good times!

I looked at Google Earth the other day to see if the building still existed. I knew that it stopped being The Roxy at some point in the 1980s, and as of the last time the Google Mobile rolled through there, at least the building itself was still standing. It's a Hibernian Lodge now, though. I have no idea what the Hibernians are or what their thing is.

If anyone affiliated with The Roxy ever reads this, thanks for the wings! Oh, and for the pinball machine that gave out free games like candy. That was fun, too.
scrawled here by Kelly Sedinger at 7:30 AM

yes i remember the Roxy when i was a little kid. we sat right by the front window and i had a slice of pizza which i still remember today at 69 years old and a pepsi. i still think about the Roxy when i drive by. i wish it was still there!