So I tried a new beer: 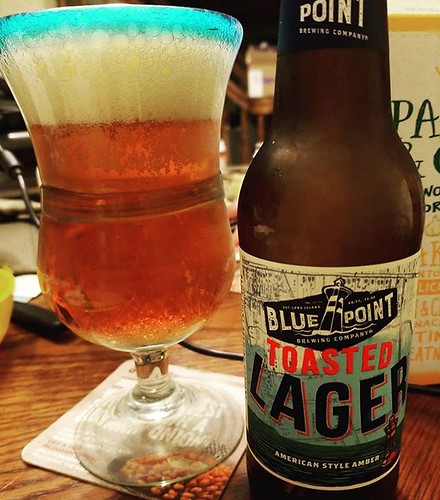 Well, it's new to me, anyway. It's not "new". Blue Point Brewing of Long Island has been around since 1998, although now it's a subsidiary of Anheuser-Busch. I've seen this label with its pleasant-looking fishing sign look in the beer section at The Store a few times, and this week I decided to give the Toasted Lager a try.

The word "toasted" puts me in mind of the first episode of Mad Men (the only episode I watched), when an ad executive in 1960-something (I think) is trying to come up with an ad campaign for a cigarette company, given that people are starting to suspect that cigarettes are actually very unhealthy. What he comes up with is to focus on the tobacco company's production method of toasting the tobacco: "It's toasted!"

Of course, this has nothing at all to do with the beer, which is so named apparently for the "toasted" nature of the brewery's first kettle. They say there's a blend of six "specialty malts" for a smooth drinking experience, but I don't know about that. I can report that the beer is pleasant and easily quaffed. I'm probably not drinking this stuff in seasonably appropriate fashion; lagers like this should be consumed in the fading light of a summer evening, not a January in Buffalo. But it probably does just fine in washing down a plate of wings, so...yeah.