Five Lakes (and one book)

I've pretty much been of the opinion for years, even though I don't think I realized it until more recently, that I honestly don't ever want to live more than a few hours from one of the Great Lakes. This region has been my home since 1981, and you might make a case for before that, since Pittsburgh certainly falls within the "few hours from the Lakes" category. These five inland seas encompass so much beauty and history and character, all of which are sometimes overlooked in our seemingly forever-ongoing "North versus South" thing in this country.

There's a children's book I read not long after we moved to Allegany, NY, in 1981. I don't recall exactly when I read it, or the circumstances under which a copy found its way into my hands; I don't recall if I owned it or if it was a library book. The book's title is Paddle To The Sea, by Holling Clancy Holling. If I owned this book, it vanished from my personal library years ago. However, I found myself remembering it recently, so I availed myself of the Erie County Public Library and checked it out. 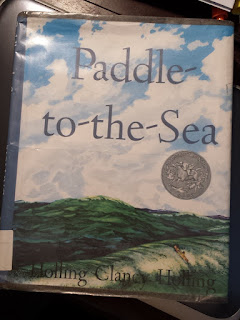 The book came out in 1941, and it tells a simple story: a young boy living in Canada carves a wooden Indian in a canoe, names him "Paddle To The Sea", and sets him afloat on a river that empties into the northern reaches of Lake Superior.

From there, Paddle follows the long and improbable journey through every one of the Great Lakes, until he finally reaches the St. Lawrence River and the Atlantic Ocean. Paddle's journey is mainly a narrative frame, though, which supports Holling's real goal: exploring the nature of these five enormous lakes. 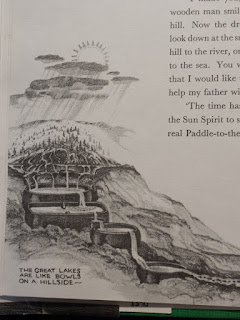 Holling's art in this book alternates between pencil drawings accompanying the text on the left-hand pages, and full-color plates on the right. In this way Holling traces paddle's voyage, which doesn't even begin to follow any kind of straight line. 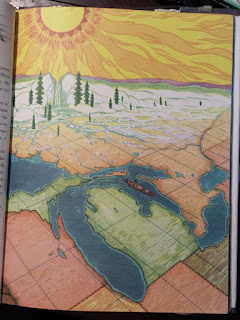 Along the way Paddle encounters various obstacles and dangers, such as the huge cargo ships on Lake Superior, the enormous waterfalls at Niagara, and a sawmill, whose operation Holling depicts:

I also love the fanciful ways Holling interprets the shapes of the lakes themselves. Lake Superior as a wolf's head is pretty obvious, I suppose, but the others are impressively creative, and I have thought of all the Great Lakes as these shapes ever since I read the book when I was ten or eleven. I remember a conversation with some college mates, trying to explain to them this particular interpretation of the shape of Lake Huron, and I remember wishing I had a copy of the book then to show them. 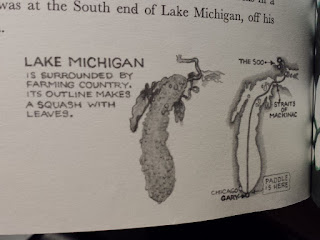 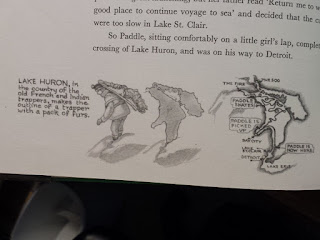 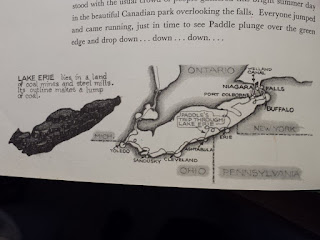 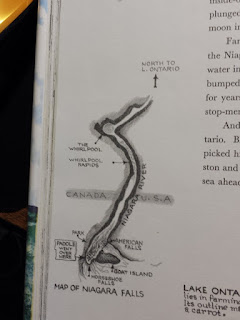 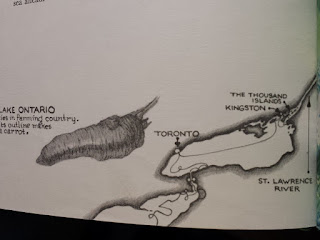 Holling's prose is somewhat dated at this point, but that's to be expected, and I wonder how Holling would depict the Great Lakes now, since the region endured a period of extended decline that began not terribly long after this book came out and which some might still think is going on. But it's still a region of nature and industry often side-by-side, all of it dominated by these enormous bodies of water.

Paddle To The Sea is a wonderful piece of Great Lakes lore, and I'm glad I took the time to revisit it. 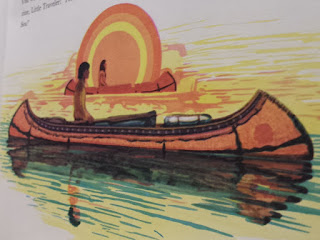 I agree about living near the Great Lakes. And given the fact that the Erie Canal runs from - how does it go? - from Albany to Buffalo, I think I've always been a few hours away, even in Binghamton.

I remember seeing a film version of that book in elementary school.

And I also remember the film version of Paddle-to-the-Sea.

I have been trying to convince my girlfriend of these shapes! Thanks goodness I found this page because she thought I was making this all up! Lol