Unless you live in some kind of cave, you're aware that there's a new Star Wars movie coming out in a year, and that the first teaser trailer erupted upon the world today.

And if you're not aware of those things, hey! There's a new Star Wars movie coming out in a year, and the first teaser trailer erupted upon the world today!


And here's a breakdown, shot-by-shot.

:: I like the look of the new hero (?) and the heroine (?). A stormtrooper unhelmeted, and the lady who rides the odd-looking speeder bike.

:: The tech looks Star Warsish, but also different: the R2-unit-like droid with the rolling body, for one, and the heavy-duty speeder bike.

:: OK, this particular thing seems to be generating the most discussion I'm seeing online, which is very weird considering this film is the seventh in a series of space opera flicks that feature more and more gonzo weaponry each time out. I'm referring to the Sith lightsaber we see ignited, by the shadowy figure in the forest; it appears to have two little lightsaber wristguard things, which is indeed rather odd. But we only catch a glimpse of this weapon, so maybe there's logic here that we don't know yet.

:: The trailer sounds like Star Wars, not just the ships, but the sound of the speeder bike and the Imperial droid language heard in the background as we see the unhelmeted stormtrooper.

:: Finally: the Millennium Falcon. Wow. Even with the arrival of the Prequels, I never thought I'd see that ship on the big screen again! The longest continuous shot in the trailer, which is as it should be, as that's the biggest payoff. (By the way: Remember how in the Battle of Endor, Lando got the Falcon's dish antenna knocked off while navigating the Death Star's superstructure? It's been replaced with a sleeker square dish!

And just because I'm curious, I'm sure it's already been linked over at Metafilter, so let's see how many comments it takes before someone rips on the Prequels or George Lucas! Answer: Technically, zero, since the poster who links the trailer in the first place gets it right out of the way! But in the comments proper (which number 205 as of this writing): It happens in the very first comment, and then the thread devolves from there into a lot of folks whose faith in everything has been wrecked by three movies they didn't like (and yet they still watch the trailer and comment a lot). Fancy that.

I guess it's still true: 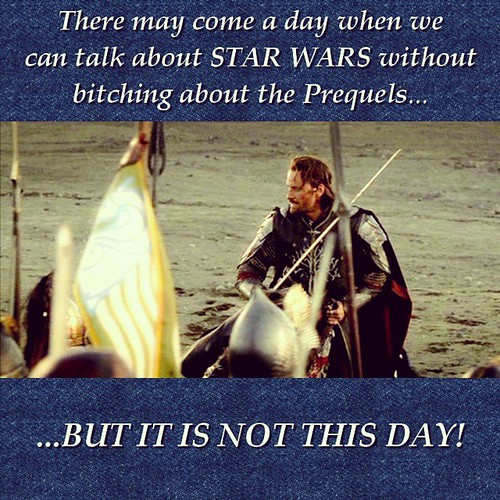 Anyway, I'm excited. I've noted many a time that while I had problems with JJ Abrams's Star Trek movies, his direction was not one of them, and neither was his cast. I maintain my optimism pretty much because I did not hate the Prequels, and because somebody had the good sense to keep Orci and Kurtzman (the writers who are in the process of ruining Trek) the hell away from Star Wars.

Obviously, we'll see -- but my hopes are high.
scrawled here by Kelly Sedinger at 3:16 PM