The blanketing of the world

Or at least my little corner of it.

Over the last few days, local meteorologists have been sounding the alarm that today could potentially bring some significant lake-effect snow to the region. Lake-effect snow, for those unfamiliar with such things, is snow that is fueled by cold winds traversing the still-warm and open waters of a large body of water, like Lake Erie. Those winds pick up moisture, and then when they hit land, they dump it, usually in narrow bands of nastiness that are often just a few miles wide. It's not uncommon for towns in the band to get a lot of snow while towns outside the band, just a few miles away, get almost none.

Lake-effect snow bands often start in the Buffalo metro area and almost always, after a few hours, shift southward into what's called "Ski Country" in these parts, so unless you live in those regions, usually you can count on a lake-effect storm not lasting all that long, even if it dumps a good amount of snow.

That, however, is not the case with this one. The lake-effect band has not budged, as of this writing. It started very late last night, and I got up at 4am to check things out. At that point, this is what the local weather map looked like. The blue area is the lake-effect band, and at this point it had looked like this for roughly four hours. We live right smack in the middle of that. The blue area there is the lake-effect snow band.

Eight hours later, I took another photo of the weather map: Ayup. The snow band has gotten a bit wider, but other than that, it's in the exact same position it was nearly twelve hours ago when it fired up.

We are getting absolutely socked here at Casa Jaquandor. Virtually every town on my side of the City of Buffalo has imposed travel bans; there are snow plow trucks stuck in ditches. Our street got plowed a couple of times, earlier, but nothing since, because what's the point?

I've seen my share of big snowfalls here, but this will be right up there with the biggest I've ever seen. Meanwhile, friends of mine who live less than twenty miles away are posting photos of their snow-dusted front lawns, blades of grass still visible, under sunny skies.

The following photo has been making the Buffalo social media rounds this morning, taken by a passenger on one of the last flights to actually get out of Buffalo Niagara International Airport. When I say that lake-effect snow can form very sharp lines between clear skies and snowy doom, I am not exaggerating. 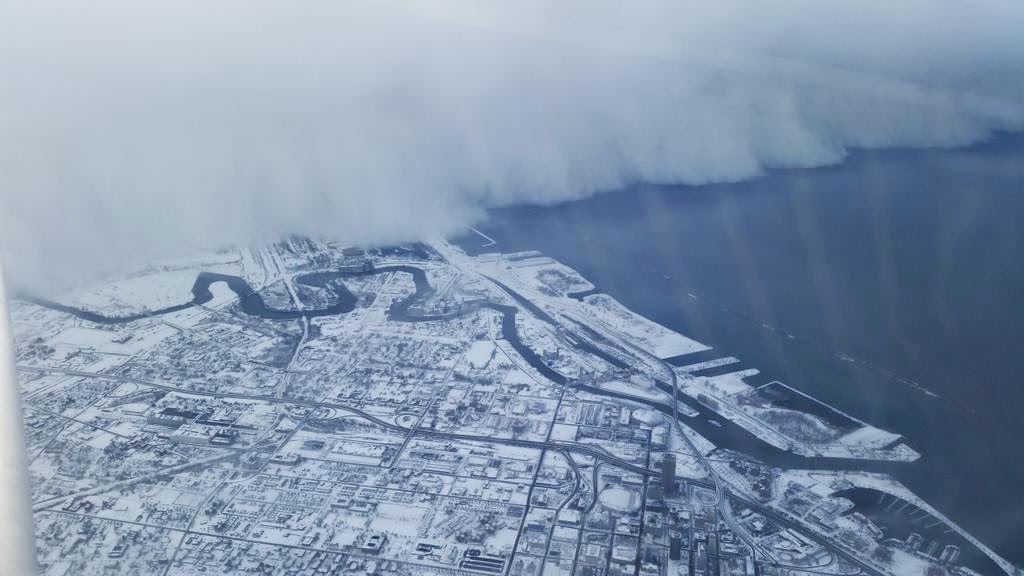 That big expanse of gray at the right is Lake Erie, and at the lower-right corner is Downtown Buffalo. Casa Jaquandor? Well, we've been swallowed up by that enormous cloud of white doom. But hey, I still have electricity and the Interwebs and food and rum and Scotch and overalls and blankets and kitties. We'll make it through!

The Empire needs to quit searching my backyard, though. 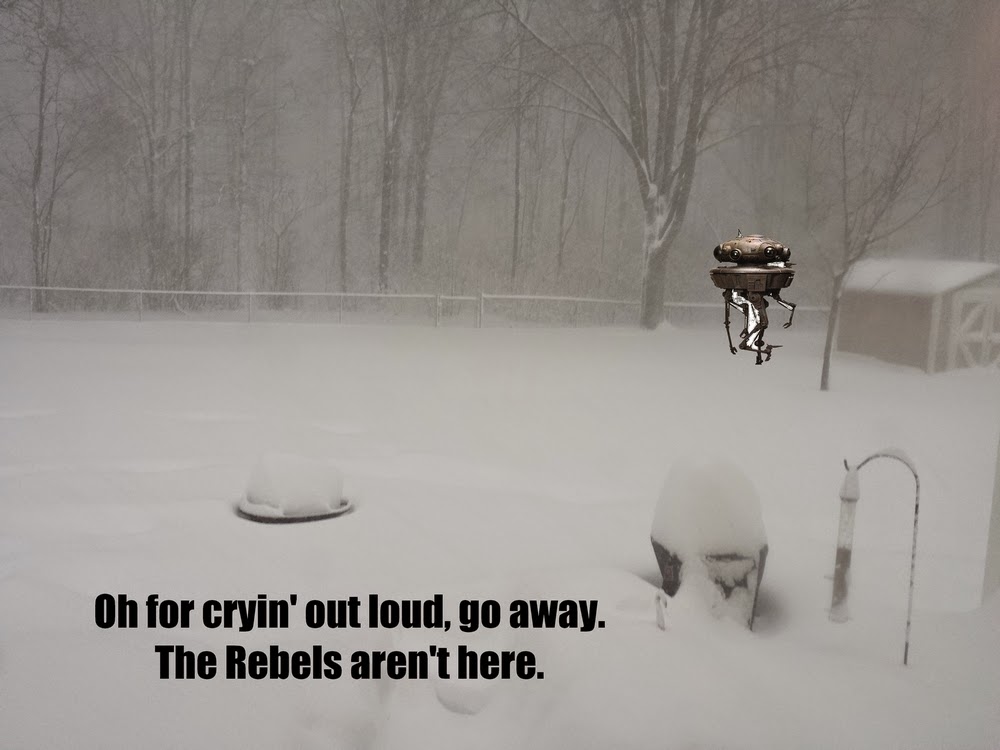 I heard there was one inch of snow in Brockport. We had flurries yesterday in Albany; the Daughter is annoyed that we don't have any school closings!