Well, there's one "Aerial Dancer" off the streets.... 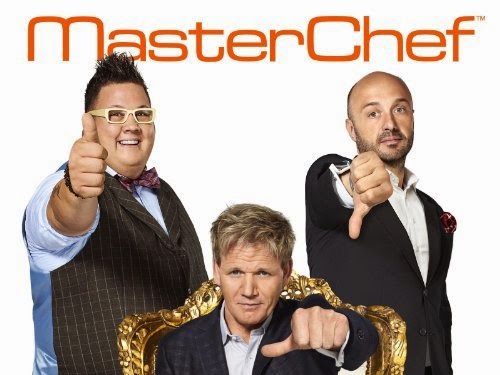 Seriously, this was just a terrible season of MasterChef. There were some fun moments and some contestants I liked enormously, but as the season ground on, it really took on an air of relentlessly shuffling toward a preordained conclusion: the coronation of Courtney. That's pretty much exactly what happened.

Look, I wasn't there and obviously didn't taste the food, so it's entirely possible that Courtney really did get through the entire season of MasterChef competition without ever making a single misstep. But the constant adoration piled upon her by the judges, coupled with her unimaginably irritating displays of self-love, got more and more annoying with each successive episode, culminating in last night's finale. Joe Bastianich, of all people, turned in the most incoherent commentary of praise for Courtney of the season when he praised a dessert that Gordon Ramsay panned, saying that her dish of meringue cookies with some sauce and cherries with a bit of salt added "pushed the limits of a dessert". Umm...OK, Joe. The whole thing reeked of desperation on Joe's part to continue the season-long tongue-bath of the most irritating contestant in the show's history. (And that's saying something. You know I love you, Joe, but ye Gods.)

Of course, none of that might have even come to pass had my favorite contestant, the borderline-manic Leslie, not mistaken salt for sugar in his final cake. Oops. (Although this confuses me -- would a cup of salt instead of a cup of sugar result in a cake that one can chew thoughtfully and then swallow with a look of puzzlement, as Gordon Ramsay did? I've no idea, but it seems to me it should have resulted in a case of "GAHHH get this out of my mouth ptoooie!"

Anyway, as I say, thank God that's over. This does mean, however, that we're going to see Courtney sporting her insufferable Dolores Umbridge-in-her-twenties act at least once next season, so there's an episode I'll make sure to attend with lots of reading material. I'd also like to see the show get away from the team competitions, particularly the ones where they run a kitchen someplace. I watch Hell's Kitchen to see chefs trying to run a kitchen; I don't care if any of these "home cooks" can run a kitchen. But if they're going to have team competitions, I'd like the losing captain to not be able to save themselves from elimination. That's pretty bogus, and it did provide the moment the cemented Courtney as an asshole in my opinion this year, when she saved herself after helming the losing team; she said something like, "Well, our problem was clearly not the fine leadership I provided, so I'm saving myself." Ugh.

So anyway, there's that. Not the best year for MasterChef, alas. Not every season can have the greatness that is Monti Carlo, but still -- did I have to endure the cooking competition show's answer to Boston Rob?

If that doesn't scream of contrivance for the TV viewing audience, I don't kow what does.

No! Courtney won? Ack. We recorded it to watch tonight, but I have grown used to you spoiling TV shows on FB.

Courtney was by far the most irritating character -- and they are all characters, by the end -- on this season. Her stripper shoes and baby-soft-kitten voice were just too much. Sure, seemed like she had the chops to win it, but in the end, I agree, it came down to which character provided the best television. She did. I enjoyed hating her.

I thought Leslie provided WAY better television than Courtney, who just preened her way through the season. And villains are fun to hate if and only if they lose. Watching the villain win is dreary.

We have created "chefs" out of people who make hamburgers (Cleveland's own Michael Symon for example). We have turned beer drinkers into someone akin to the brandy sniffer in a smoking jacket with all of these upscale microbreweries.