How I feel when the entire Internet goes into "OMG BREAKING BAD" mode. Yeesh. 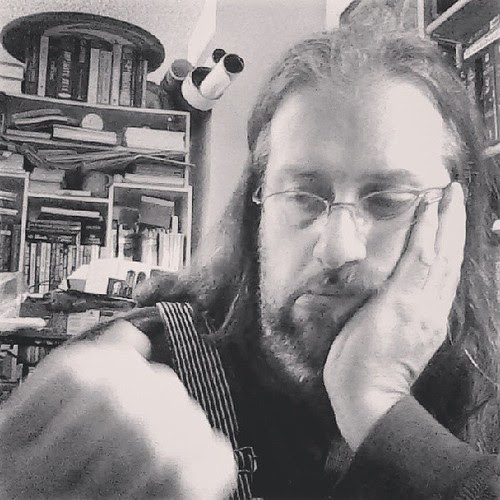 How I feel when the entire Internet goes into "OMG BREAKING BAD" mode. Yeesh., originally uploaded by Jaquandor.

So a week or two ago I watched the pilot episode of Breaking Bad, figuring to finally catch up a bit on what is apparently, to judge by online reaction, the single greatest Artistic Endeavour in the history of the television medium. (And that isn't remotely hyperbole on my part -- that is an accurate summation of opinion.) My reaction? I didn't like the episode, so I decided not to bother with the rest of the series. (Please don't try to talk me into going back into it. I'm really not interested.)

Now, this goes into my general sense of ennui with pop culture's current (and, to my way of thinking, disturbingly ascendant) fascination with villains and antiheroes -- what I've come to think of as Awful People At Work And Play. But I'm also interested in this whole phenomenon of binge-watching teevee series. I see people online talk about watching an entire season of some show or other over a day or two, and my mind reels -- after one or two episodes of something, I'm ready for something else. Even things that I really, really like, such as Battlestar Galactica or Arrested Development (which The Wife and I are watching now). I find that I am simply not wired for binge-watching.

I also discover that a common argument for teevee series is, "Well, you gotta give it five or six episodes before it hits its stride." And that is true, to an extent -- but when confronted with an entire series on DVD or streaming, my eyes glaze over at the prospect. "I gotta watch six hours of this thing just to know if I like it enough to keep going?" That can't be right.

I'm encouraged by the existence of teevee series that are intended to tell a single story, instead of being open-ended unto an inevitable limp toward cancellation. But by the same token, a lot of such series constitute way too much of a time investment for me. With movies and teevee, I don't get to control my rate of experiencing the narrative, and in any event, a teevee series is really built around a weekly schedule. Binge-watching just doesn't feel right to me.

How about you folks? Do you binge-watch teevee series?

scrawled here by Kelly Sedinger at 7:47 AM

Occasionally, when one of the cable/satellite channels has a marathon of some show but I have never purchased a series on DVD.

Sometimes I "discover" shows that way. A few weeks ago my husband started watching a Hell on Wheels marathon, a show I had never even heard of, and I really liked it and can hardly wait for the new season to start. And Saturday my son and I watched Torchwood all day. I'm a little embarrassed to admit that I had never seen it before. I understand it's required viewing for really cool science fiction fans.

Breaking Bad? Never watched it, don't intend to. Any time people are all "OMG this is the best ever!" about anything that's almost always a big turn off for me.

Once, this summer I watched the entire series of WEEDS but my binge lasted 2 months. Still it was accelerated enough for me to notice an interesting phenomena: the sudden onset of the "shark jump". If you watch a series over an extended period of time the writing deteriorates slowly (if ever), so bad plot lines seem more palatable as you tend to justify them by your memories of the better stories.

Weeds started out good, really good, but by the end of series it was so bad I thought it was a spoof. It was interesting to pinpoint the moment the real writers left.

I thought breaking bad was good (although I haven't seen the entire series)as it depicts tragic hero in a way that can only be described as sublime and not normal for TV.

You should worry about this decision precisely when you've watched EVERY SINGLE THING that you've ever WANTED to watch, on TV, film, etc. THEN you MUST watch Breaking Bad (or whatever show one MUST see.) You're right about the adulation, BTW. And maybe somedday I will see it. Or not.

I'm right there with you on my total lack of interest in Breaking Bad as well as the whole distasteful anti-hero fad. The grim-n-gritty thing just isn't my cup of tea. Also, I'm wired in such a way that the more people gush about a given series/movie/musician/author/whatever, the less inclined I am to see it, or like it. I'll be honest, I think this was a big element in my resistance to the Battlestar Galactica remake. My loyalty to the old series was the biggest factor of course, but it seemed to be so very important to so many people that I like the remake, that I found myself digging in my heels and refusing to hop on the bandwagon. Maybe in another 10 years or so, I'll reconsider that one.

As for binge watching, I don't really enjoy it myself. I'll occasionally watch multiple episodes of something in a row... two or three, perhaps... but then my attention starts to wander, and it'll be days before I feel like watching that particular series again. I just don't have it in me to burn up an entire weekend plowing through a single series.

Breaking Bad and Mad Men pretty much are what they are right away.

I have done marathon binge-watching with The 4400, LOST, Fringe, New Girl...but some of that was because I was watching those with someone else and we could only make time once or twice a week (and we got more out of the rentals that way). I have taken my time with re-watching DS9 and Voyager and Twin Peaks.

Agh, you would write this today so I would see it after I turned in my column about this very thing, so now it looks like I was complaining about you specifically. Urgh. (jsyk, I'm not)

Honestly, I don't see why I should devote six hours of my life to deciding if I like a show or not.

And I'm with you (and others) on the anti-hero thing. There are enough bad people in the real world; in my entertainment I want people who have some better qualities, who, maybe, even represent something I might want to aspire to be.

I don't know if the anti-hero trend is like something I noticed in grad school - several of my colleagues watched stuff like Jerry Springer. When I asked about it, they told me, "It makes me feel better about myself to see other people with such screwed-up lives." Wow. That depressed me, and it still does, typing it out.

I guess I'd rather feel like, "You need to step it up a little" (on morals, on how I treat people, on whatever) than say, "Oh, look, there are people worse than you out there, so you can just relax."

I think breaking bad is more about a tragic hero than an anti hero. A guy who wants to be good but due to circumstances beyond his control (cancer, his invention stolen from him, his sons disability) is looking at a reality that will take him off of the path of righteousness. The inner turmoil continues and justification after justification ensues until he is not sure who he is...

I agree with the above poster in that I think many of us are plagued by schadenfreude, but being pollyanna is just the other extreme. Both are natural coping mechanisms and neither really work.