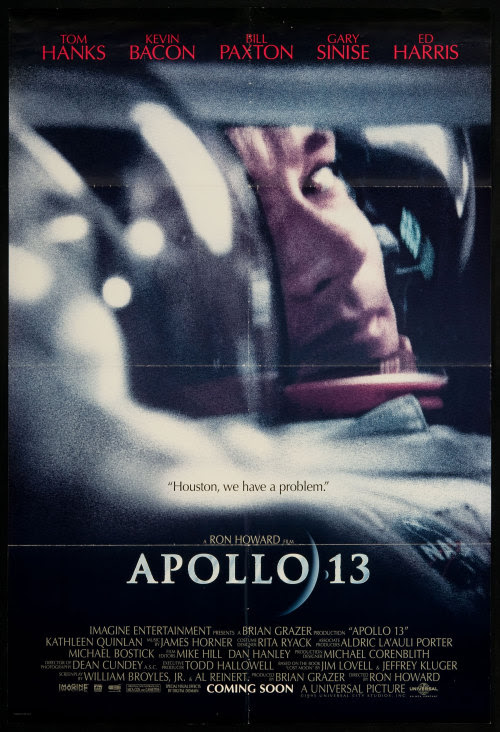 I know, I haven't done one of these in a ridiculously long time! But here's something, a favorite moment from a movie that I think is starting to border on being criminally underrated: Apollo 13.

The story is well known by this point, I hope; the moment I'm quoting here isn't one of the more famous moments, but it's an excerpt, in the movie, of an interview astronaut Jim Lovell had given before the Apollo 13 mission ever blasted off. It's the type of wonderful scene that may seem at first glance like a bit of filler, but it establishes so much about the character of Jim Lovell that it's really indispensible. And as it comes later on in the film, after the mission has already been deeply imperiled, this scene partially serves to assure us that this mission is still in good hands, and that this guy will pay attention and find his way home. Here's the speech that Lovell (Tom Hanks) gives:

Uh well, I'll tell ya, I remember this one time - I'm in a Banshee at night in combat conditions, so there's no running lights on the carrier. It was the Shrangri-La, and we were in the Sea of Japan and my radar had jammed, and my homing signal was gone, because somebody in Japan was actually using the same frequency. And so it was - it was leading me away from where I was supposed to be. And I'm lookin' down at a big, black ocean, so I flip on my map light, and then suddenly: zap. Everything shorts out right there in my cockpit. All my instruments are gone. My lights are gone. And I can't even tell now what my altitude is. I know I'm running out of fuel, so I'm thinking about ditching in the ocean. And I, I look down there, and then in the darkness there's this uh, there's this green trail. It's like a long carpet that's just laid out right beneath me. And it was the algae, right? It was that phosphorescent stuff that gets churned up in the wake of a big ship. And it was - it was - it was leading me home. You know? If my cockpit lights hadn't shorted out, there's no way I'd ever been able to see that. So you never know...what...what events are to transpire to get you home.

Here's how Hanks delivers it. I love his little conversational ah's and um's; most of all -- and this is such a tiny detail to notice, but it's just great -- as he's telling the story, he reveals what the 'green carpet' in the ocean was, and when says it, at the end of the sentence he says, "Right?" As if to lead us to the same conclusion he has reached.


I've said this before, but I'll go ahead and repeat it: I really think that all the time corporate America spends in goofy meetings and seminars and "team-building events" to try and teach "teamwork" through fake activities could be better spent by simply putting all the workers in a room and screening this movie. I cannot think of a finer example of teamwork in a movie.

In the scene you showed, I had real concern that they would make it back even though I KNOW HOW IT ENDS, which is why I think this movie is so great.

Great, great movie, one of my favorites. As Roger says, it recreates the tension of those three days, and more than that, it recreates the excitement and yes, the risk of the space program, too. The lift-off scene is frankly incredible for the way it REALLY puts you in the capsule with these guys and makes you feel what a rough ride they really endured. (Love the joke about "a little bump" that then hurls them against their harnesses.) Tom Hanks is an American treasure, of course, our generation's Jimmy Stewart, but I think all of the cast is outstanding in this... Ed Harris is downright spooky as Eugene Kranz if you've ever seen any footage of the real Kranz. And even Bill Paxton, an actor I normally don't care much for, is good.

I get really annoyed at the way people dismiss Ron Howard as being too commercial, too fluffy, too whatever the hell the problem is. He's exactly the sort of reliable craftsman who would've flourished in Hollywood's Golden Age. I don't love everything he directs, but there's a significant percentage I do...