"Come, my friends, 'Tis not too late to seek a newer world." 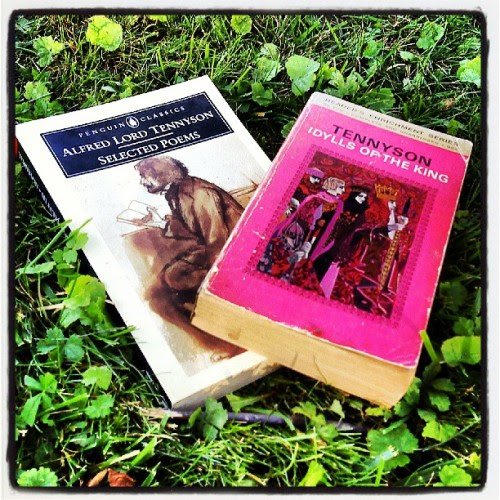 Today on Twitter, the indispensible Sheila O'Malley reminded me that today is the birthday of Alfred, Lord Tennyson. Actually, it's a misnomer to call it a "reminder", as I never knew Tennyson's birthday in the first place. But I should have, I think. I've adored Tennyson's poetry for years, going all the way back, most likely to my senior year of high school, which is the year I finally gave in to a suspicion that I'd been harboring going back to junior year: that my English teachers weren't full of it, and that there really was something to all this literature they kept having us read.

I don't recall what Tennyson poems we read that year in Mrs. Hultberg's class, save one: "The Lady of Shalott", which is one of those poems that caused in me the "mortal wound" that Robert Frost would later speak of*. I come back to it from time to time; in fact, I came back to it just this evening, while I sat outside in the grass while The Daughter had her string bass lesson. It seemed a good time to read a bit of Tennyson, and not just because Sheila put him on my mind. There's always something about Tennyson that to me suggests sunsets on perfect days. Not sadness, although he can be sad; not an elegy, although he can be elegiac. But with Tennyson, one is always aware that time is passing, that things are changing, that old things are moving into memory and new things are coming to the fore.

When I read "The Lady of Shalott" in high school, I was still a year or two away from the explosion of my great passion for the Arthurian legends. This passion has admittedly cooled in recent years, but I do still get the sense that it's a slumbering passion, waiting to be awakened one day. Perhaps it was Tennyson's poem that planted that seed, that sad verse about the cursed lady in her tower, forbidden to look upon the world except through a mirror, until one day she sees Sir Lancelot riding by and hazards a glance, bringing about her own end.

I find that every time I read Tennyson, I end up reading him aloud, or at the very least, mouthing the words. Few authors have this effect on me, if any, but there's just something about Tennyson's rhythmic alliterations, and his way of using his lines to suggest the sounds of the very things he's writing about:

Anyone who reads that without sounding it out is entirely, utterly, supremely, missing the point. And Tennyson always needs to be sounded out. In this he is like Shakespeare. His words are sound, and they don't live in the page. They live on the tongue, spoken.

In my collegiate Arthurian craze, I returned to Tennyson and read his Idylls of the King, a cycle of poems he wrote which rather loosely tell the story of King Arthur and the rise and fall of Camelot. I've never re-read the entire thing, but I dip into it with frequency. One thing that has always stood out for me is a tiny thing, a minuscule detail, that comes at the end of his version of the tale of Sir Gareth and Lynette. Gareth is a young knight, born of low station, who goes off questing, and he meets a woman named Lynette, who derides him constantly. But through his valor he eventually wears her down and proves himself. In the original Malory, Gareth marries a woman named Lyonors. Tennyson, however, decides to make a change to the ending:

And he that told the tale in older times
Says that Sir Gareth wedded Lyonors,
But he that told it later says Lynette.

Tennyson felt the ending lacking in the original, so he changes it, presumably to suit his view on what the happy ending there should be. But he does it in so interesting a way! He breaks "the fourth wall", so the speak, and directly implies that he's not relating history or merely transcribing some old tale; he is recasting the stories in a way that suits his own instincts and also seems to be slyly winking at the reader, almost inviting us to decide the matter for ourselves.

Here is Loreena McKennitt's setting of "The Lady of Shalott".

It is absurd to think that the only way to tell if a poem is lasting is to wait and see if it lasts. The right reader of a good poem can tell the moment it strikes him that he has taken an immortal wound — that he will never get over it.