I saw, via Facebook, this fascinating article by Stephen King about opening lines. It's very much worth reading, as is the follow-up article that solicits favorite opening lines from twenty-one writers.

Stephen King: There are all sorts of theories and ideas about what constitutes a good opening line. It's tricky thing, and tough to talk about because I don't think conceptually while I work on a first draft -- I just write. To get scientific about it is a little like trying to catch moonbeams in a jar.

But there's one thing I'm sure about. An opening line should invite the reader to begin the story. It should say: Listen. Come in here. You want to know about this.

How can a writer extend an appealing invitation -- one that's difficult, even, to refuse?

From the second article:

"Where's Papa going with that axe?" said Fern to her mother as they were setting the table for breakfast. --E B White, Charlotte's Web

Not the way you'd think a children's book about a pig would open, and it instantly sets the central fear at the heart of this story: death.

I've been mulling this over a bit. The fact is, a great first line doesn't really make me want to keep reading; nor does a bad one make me stop. I've read all manner of books that I love whose first lines I honestly don't recall, and I've read books I didn't care for whose first lines I do. So it's not quite a cut-and-dried as all that. But a good first line is still preferable to a bad one or a lackluster one, and a good first line does reveal an author at work who has put some very real thought into things.

Great opening lines I remember? Well, I tend to think in terms of entire opening passages, rather than opening sentences. The way JRR Tolkien opens The Hobbit is utterly masterful: "In a hole in the ground, there lived a hobbit." Right up front, we're in the world of strange beings we haven't heard of, who live in their subterranean world. He goes on to establish more of what a hobbit is and what they do in terms of living in holes, and by the end of the second paragraph, he's got me hooked. And of course, there's the famous opening paragraph to A Tale of Two Cities:

In science fiction, Simon R. Green's Deathstalker has a wonderful beginning, even if the rest of the book doesn't quite measure up. But for my money, my favorite opening line of all time doesn't even come from a novel or other work of fiction. It is the way Carl Sagan brings us into Cosmos:

Just thirteen words, and Sagan establishes that we are going to be talking about everything, and that the wonder is to be found everywhere. Amazing.

I was interested to read that Stephen King works very hard on his first lines, right up front, before moving on to the rest of the book. Yes, he's Stephen King and I'm me, so what do I know, but I do the exact opposite: I charge in full-speed ahead and don't pay any attention to the opening line until I'm into the editing phase. In the case of Princesses In SPACE!!! (not the actual title), I didn't have an opening line until well into the first round of edits. I mean, I did have an opening line, but I came up with a different one.

And, for those curious, here it is: 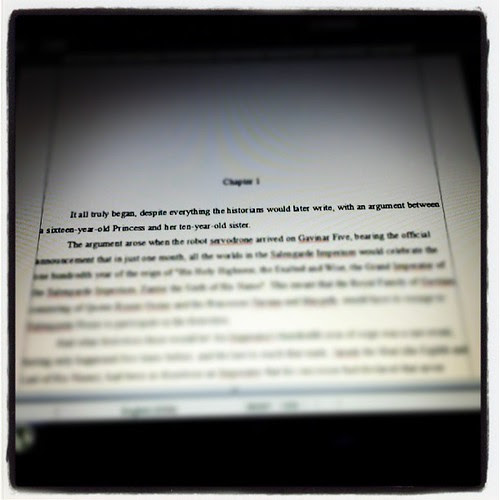 How does it work? Well, I suppose we'll see.

I think it works. It makes me go "Sooo... what are they arguing about?"

"I had just finished biting the hand that fed me when God called. Again."

" He doesn’t know which of us we are these days, but they know one truth. You must own nothing but yourself. You must make your own life, live your own life and die your own death.. . or else you will die another’s."
Alfred Bester - Fondly Fahrenheit

It makes me want to read it more than the title.

Sure. I know (something) about what it's about, which is good.

The black stiletto flew by her ear so close, the spikes on the heal probably collected DNA. A faint "Oh, pardon, dear sister" could be heard from across the room.

"That is how it all started. That is what history left off its pages" reminisced the old woman.

Mark: Why do you think I keep indicating that it isn't the actual title! :)

My point is that the first real bit of info that I learned made me want to read it.