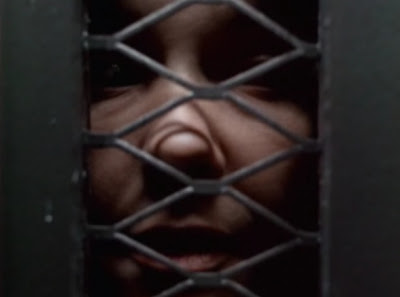 "Eve" is one of the stronger episodes of the first season, and it's actually a very memorable tale, only partially undone by some poor storytelling in the last act.

A shocking murder takes place in Connecticut, where a suburban father is found sitting on his daughter's backyard swing set. His skin has gone completely white, and there are two distinctive puncture wounds in his neck. Only his daughter is there to see.

This sounds like a vampire story at first, but when learning of the case, Mulder's initial hypothesis is alien abduction, based on blood loss that resembles that in cattle mutilation cases. Since the daughter reports having seen nothing, Mulder interprets this as a "time loss", similar also to that of alien abduction cases. This is the direction in which things are going, when another murder takes place in San Francisco – under identical circumstances. When Mulder and Scully investigate this one, they find that this victim also has a daughter, who is identical to the daughter of the first victim.

There are a number of twists and turns in the course of this case, but it eventually turns out that the two girls are the second-generation progeny of a woman 'created' in secret US government eugenics experiments that took place at the beginning of the Cold War. The experiments created children with strong psychological connections to one another – and also with deep psychoses. The earlier woman – named 'Eve' – used her job as a fertility doctor to inseminate couples with her own created embryos, leading to the births of identical children on opposite sides of the country – but children who somehow already know of each other's existence.

This is all very eerie and effective, until the final act, when Mulder and Scully are taking the two girls to where they can be treated or observed or some such thing. The girls are planning to kill Mulder and Scully, and their plan is to poison their soft drinks with digitalis, the same poison they had used on their own fathers. The script establishes that the poison has a very sweet flavor, so it's maddening when Mulder and Scully both comment on how sweet their drinks taste but don't put two and two together. Mulder figures things out, though, when he realizes he'd left his car keys on the counter of the truck stop where they'd bought their drinks. He goes back in, grabs his keys, and finds a couple drops of the poison right there on the counter. This whole scene is just awfully done. The rest of the episode is very good; I can't believe the writers (Kenneth Biller and Christopher Brancato) couldn't come up with a better way to have Mulder or Scully figure things out.

My only other quibble is the show's apparent growing reliance on the Deep Throat character to show up and provide an infodump at some point. Mulder always seems to have his source of information that jump-starts his investigations.

Nevertheless, the episode has a nicely chilling premise, its first three acts have enough shifts that we don't know what's going on, and the last scene is one of those niftily eerie ways The X-Files had of ending things on a note of non-resolution. It's a very good episode that is mainly marred by some deus ex machina in the end.
scrawled here by Kelly Sedinger at 9:31 PM